EV sales have taken off, demand doubling during the first half of 2021. And, with a wave of new products scheduled to hit the market, they’re expected to resonate all the more with consumers. There are still plenty of skeptics, but if you aren’t quite sure yet, Hertz may be able to help you make up your mind.

The rent-a-car company plans to purchase at least 100,000 Teslas to electrify its U.S. and European fleet, and the first of those Model 3 sedans have already landed at a handful of Hertz lots. They’ll begin rolling out across the company’s network by the end of the year, creating what is being billed as “one of the largest [EV rental fleets] in the world.”

But you may have to stand in line. A quick search by GearJunkie of Teslas in the Hertz fleet showed that reservations have been pouring in. At Washington, D.C.’s Dulles Airport, for example, the rental firm’s website flashed “Sold Out” through at least the end of the first quarter of 2022. 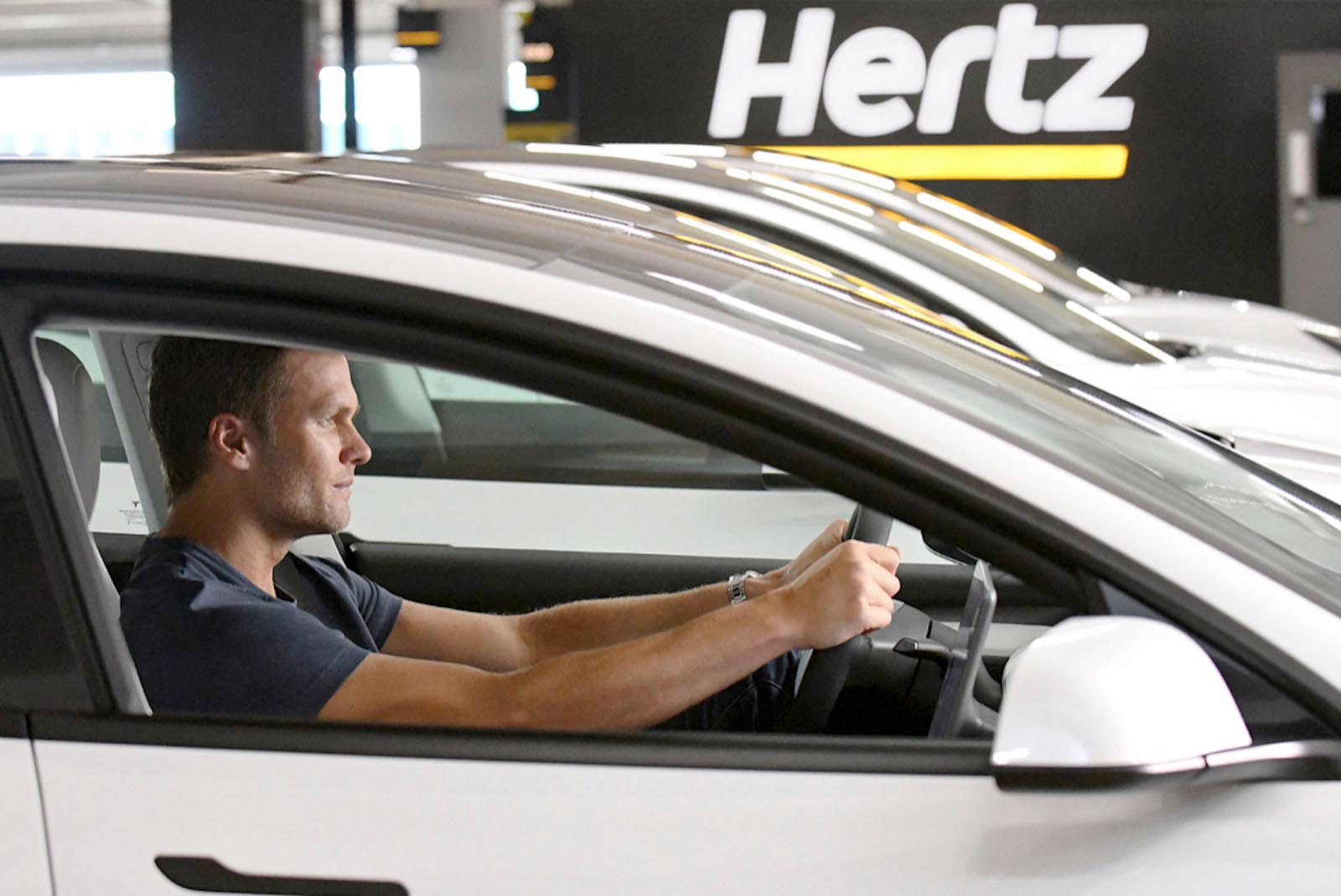 “The new Hertz is going to lead the way as a mobility company, starting with the largest EV rental fleet in North America and a commitment to grow our EV fleet and provide the best rental and recharging experience for leisure and business customers around the world.”

Initially, Hertz plans to order 100,000 Tesla sedans, though that could jump to 150,000 or more, depending on customer interest. Spokesman Ray Day told GearJunkie that Hertz is open to deals with other EV manufacturers, though he declined to say which ones the rental company is considering.

The first of the Tesla sedans are already in the Hertz fleet in a handful of California locations, as well as in Washington, D.C., with new locations to be added as the carmaker delivers more vehicles.

To get the word out, Hertz has lined up Tampa Bay Buccaneers quarterback Tom Brady. In a series of ads, the seven-time Super Bowl winner will use his familiar, gameday “Let’s Go!” rallying cry.

Battery-electric vehicles “are really starting to resonate with consumers,” according to Brent Gruber, J.D. Power’s senior director of global automotive, and a series of new studies predict that demand will only increase now that there are “new products … coming out on a very frequent basis.”

As the 2021 model year wrapped up, there were a baker’s dozen long-range BEVs available in the U.S., with analysts forecasting the number will quadruple by late 2022.

For every 10 motorists expecting to buy a new vehicle over the next year, three are strongly committed to going electric, according to Gruber, with another two completely uninterested in the technology.

The challenge for the industry is winning over the other 50% and, he said, the best way to do so, “is to get butts in seats.” Renting first could be the best option for those who have yet to experience what the latest generation of BEVs can offer.

The Model 3 sedans going into the Hertz fleet have an EPA-rated range of 260 miles per charge. That should be enough for many vacation and business travelers and, for those who expect to clock even more miles, Hertz is putting in its own network of quick chargers. Renters also will be able to plug into Tesla’s nationwide network of Superchargers. 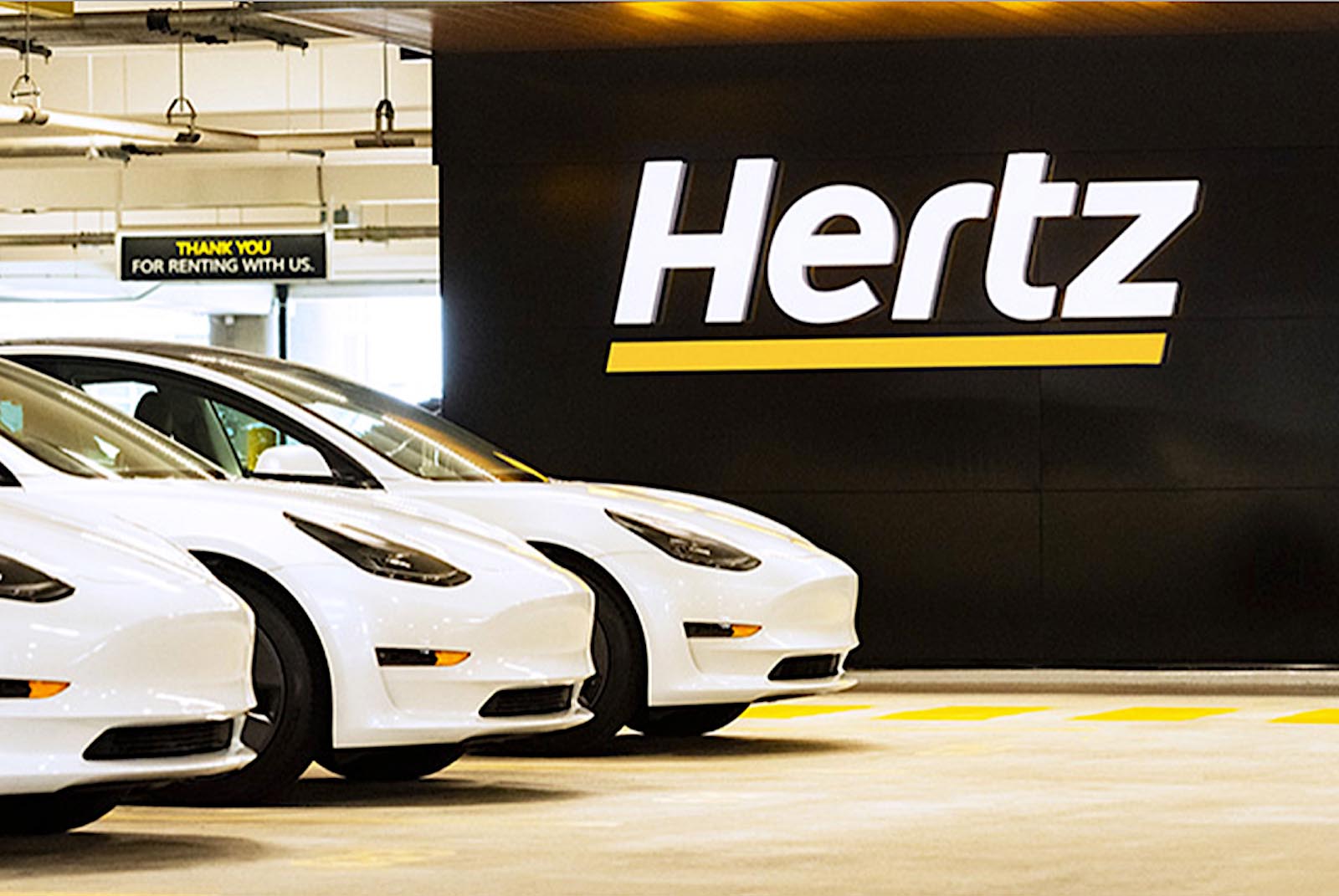 The deal with Tesla is just one of a number of moves Hertz has made since it emerged from bankruptcy in June. The rental car company brought in former Ford CEO Mark Fields as its interim chief executive at the beginning of October. He quickly announced plans to stage an IPO. On top of the tie-up with Tesla, Hertz also has negotiated deals with Uber and Carvana.

Uber drivers will not only save wear and tear on their own vehicles but can also reduce their energy costs, as well. Depending upon when and where they plug in, it could cost less than $10 per “fill-up” of the 260-mile battery pack. A comparably sized gas-powered model would suck down over $30 in fuel at current prices.

Under Fields, Hertz locked down yet another deal in October. The rental firm plans to turn to Carvana to sell off used models going forward, rather than dumping them into car auctions or its own Hertz Car Sales network. This will be the first time a car rental firm has directly partnered with a used vehicle chain.

At some point, Hertz’s new Teslas likely will wind up on Carvana lots, as well. And they could find a ready market among Hertz customers who liked what they rented.