Another electric truck was just revealed in Shanghai by a Los Angeles-based company. The Neuron EV T.ONE might just be the electric adventure vehicle we all were hoping for during the recent Tesla Cybertruck reveal.

The full-electric truck market is getting busy. There have been about eight electric pickups announced for production in the next few years. The current frontrunners, in terms of recognition at least, are Ford, Bollinger, Rivian, and Tesla. Neuron EV hopes to bring its own flavor to the electric truck party with the T.ONE.

Where the Tesla Cybertruck shocks us, the Neuron EV T.ONE is a pleasantly surprising design. This electric vehicle looks like the unique luxury truck of the future. The design capitalizes on the electric powertrain packaging while still looking like something we might call a truck. 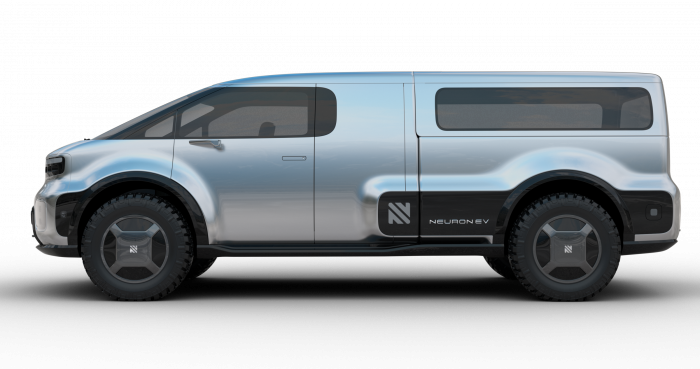 Clean aerodynamic shapes, lots of LEDs, and big fender flares make for a thoroughly modern and powerful design statement. The aggressive all-terrain tires, as well as front tow hooks and rear recovery shackles, hint that this truck is meant to be used off road. While the wheels are unique and futuristic looking, they honestly just look like cheap hubcaps to me.

Inside the T.ONE, you are greeted by an extremely luxurious space. It’s filled with wood veneers, leather, and other high-end materials, as well as what looks to be Eames-inspired seating.

The only really shocking thing inside is the possibility of an odd single central driver position. The seating layouts in the T.ONE vary from carrying three to six passengers. The revealed concept truck has a single central forward driver’s seat, with two seats behind.

What We Know (Not Much)

Very little has been revealed about the T.ONE, especially any sort of powertrain details. What Neuron has said is a “multi-source propulsion system draws power from an all-electric traction battery pack, replaceable reserve power, and removable solar panel truck bed cover.”

Those are some interesting ideas, but they haven’t even hinted at any specs. That’s a clue we may not be ready to see this in prime time for a while.

“For us, vehicle performance is determined by usability. Why are vehicles engineered to go faster than the speed limit if our goal as a society is to reduce car accidents? Neuron’s product quality is measured by ease of use, comfort, reliability, safety, and sustainability,” Neuron EV said.

It sounds to us like the brand isn’t going to step into the performance wars and instead focus on building a safe, usable, and eco-friendly vehicle.

Neuron EV claims the T.ONE to be the “world’s first modular electric utility vehicle.” The vehicle is based on a skateboard chassis, with a low area between the wheels for the passenger compartment. The revealed concept is set up as a three-passenger truck with a topper. On Neuron EV’s website, the T.ONE can be seen with a standard pickup truck bed, goose-neck flatbed, SUV, and dump truck rear modules.

While Tesla had some hiccups (okay, big issues) with its Cybertruck reveal, it at least got everyone talking.

Although Neuron EV is based in Los Angeles, it passed up the opportunity to reveal the T.ONE at the LA Auto Show, and instead showed it at the China International Import Expo (CIIE) in Shanghai. The Neuron EV booth in Shanghai was next to both Ford and Tesla at the Expo.

Neuron EV said it did this because China is the largest and fastest-growing EV marketplace, and the CIIE is one of the largest trade shows in the world. Both reasons are hard to argue with.

We’re pretty sure they would have received a lot more attention with a reveal in Los Angeles, however. Maybe the truck just isn’t ready for prime time?

You can “reserve” your own Neuron EV T.ONE today, but we’re unsure of exactly what that means. You can enter your details into a contact form on the website, but that’s about as far as your “reservation” goes. Besides, it’s hard to reserve a product that doesn’t have any specifications, price, or even a projected production date.

Neuron EV is a privately held company that has big aspirations. On its website, it offers up a bunch of electric transportation technology and product ideas. These include a semi-truck that looks pretty similar to one announced by Tesla last year.

Called the TORQ, it’s a large truck meant for commercial use. But the brand has revealed little in the way of how, or when, it might bring these products to market.

Besides the impressive-looking T.ONE modular truck concept, the Neuron EV STAR “multipurpose electric mini truck” van concept really piqued our interest. Only time will tell if any of these great ideas get off the ground, but we’re hopeful, as we like what we see!

P.S.: If you’re wondering where the T.ONE name came from, Neuron EV explains it as follows:

“The letter T signifies that it’s built on a truck platform. The word ONE was used in combination because it’s built as an all-in-one multipurpose vehicle. The platform can take on various truck bodies as well as a van. It’s more than a simple pickup truck, it’s an Electric Utility Vehicle that offers value through modular technology.”