After turning heads in 2019 with its first tailgate pad for mountain bikes, Rocky Mountain Underground returns with a tighter, more thoughtful upgrade — keeping what worked and ditching what didn’t.

The beauty of a pickup truck is that you can toss anything in the bed you want to haul. But while that’s great for your toolbox or a cord of firewood, it’s not quite ideal for that carbon fiber mountain bike.

Sure, you could toss an old bath towel over your tailgate, hang your fork over it, and make it work. And hey, if that’s your jam, no judgment here — it’s a budget solution I’ve seen countless times on the highway.

However, if you’re willing to invest a little extra to accommodate that high-end whip, a purpose-built tailgate pad provides a trustworthy, set-it-and-forget-it solution. 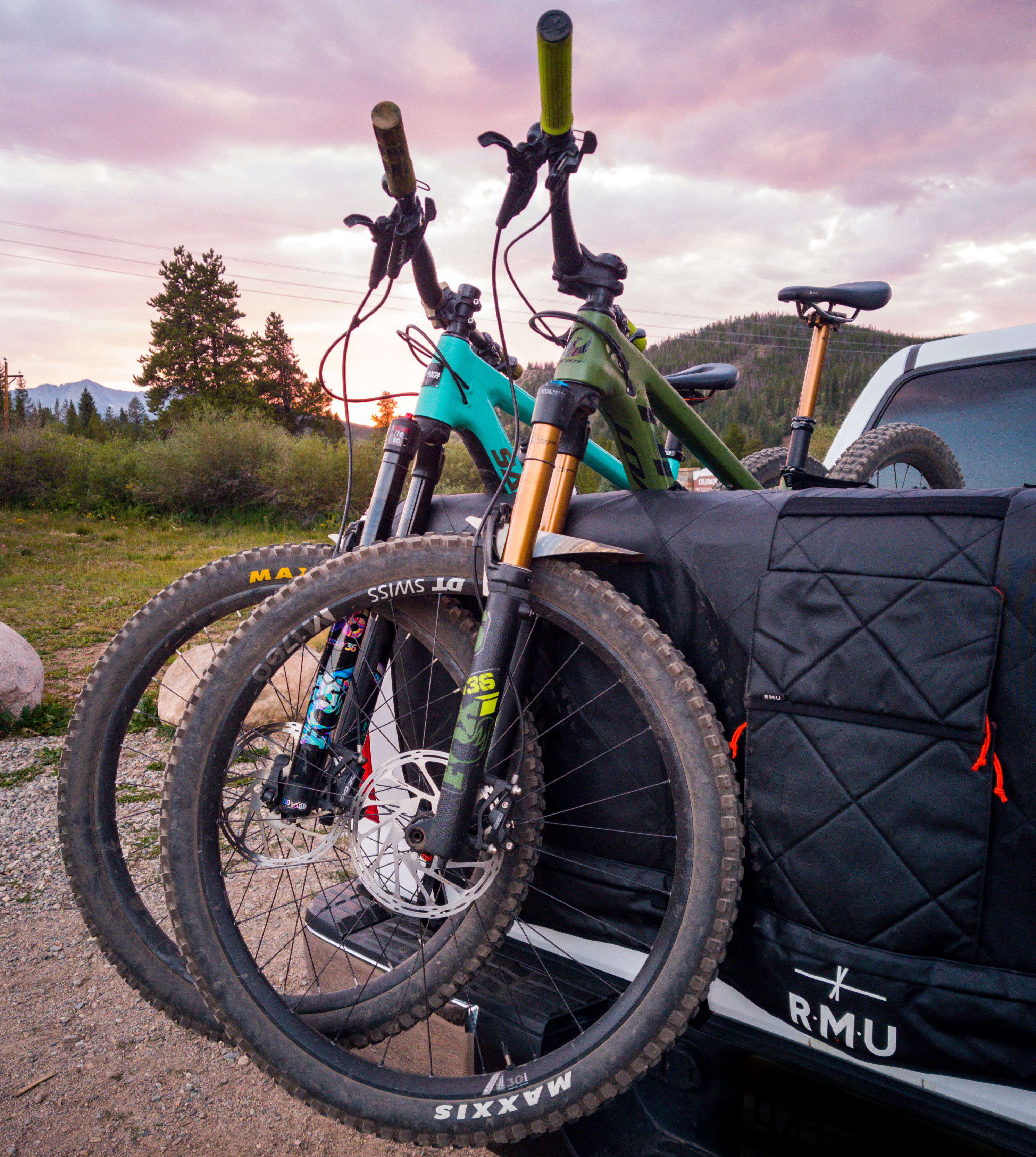 And if you really want to treat yourself along with that bike, RMU offers a twist on the common tailgate pad. In addition to secure stow-age for up to five bikes, the Tailgate Locker 2.0 has an insulated beer pocket. It’s not reinventing the wheel, it’s just … adding a beer pocket to the wheel.

In short: We received an early pre-production sample of RMU’s Tailgate Locker 2.0. We tested and liked the original Tailgate Locker, which also had a beer cooler. But unlike the original, which had a pocket for everything and the kitchen sink — well, a rinse kit — version 2.0 pares down unnecessary frills and tightens the overall package (literally, with better straps).

The second iteration of RMU’s mountain bike tailgate pad is a combination of both “less is more” and “more is more.” On the one hand, the brand ditched storage pockets on the outside of the pad. Originally, the rear-facing side housed a pocket for a rinse kit, to wash off gunk or mud after a session, as well as storage for a toolkit.

With the new Tailgate Locker, RMU opted for “all business in the front,” according to design manager Joe Dubois. This results in a cleaner and less bulky look overall. But business in the front can only mean one thing: a beer pocket in the back. And while this carries over from the original, RMU added a gusseted construction the OG didn’t offer.

This is noteworthy, as sliding 12-ounce cans into or out of that flat pocket proved tight. Now, getting your hands in and the beer out is noticeably easier. There’s also a general accessory pocket, also gusseted, adjacent to the mini cooler.

As for shuttling bikes, Tailgate Locker 2.0 holds five bikes, just like the previous version did. But RMU learned from user testing that it could do better on straps — specifically, it made them shorter. This was a huge improvement, as it vastly improves the contact surface for the opposing sides of the Velcro, which in turn makes the bikes more secure in transit.

Finally, the latest Tailgate Locker comes with a fourth strap for snugging the pad to the actual tailgate. On my midsize truck, the original pad had a little play, even when tightened down. On the 2.0, the extra strap goes a long way to fitting it better to the truck.

A few other design callouts: A zipper-and-Velcro flap can be opened or closed to access or cover the tailgate handle and backup camera; a cable sleeve lets you secure bikes to the pad for quick errands into the store; and 840-denier nylon with carbonate and PU coating provides a heavily abrasion-resistant and weatherproof build.

If there’s any knock on RMU’s Tailgate Locker, it’s that it may prove more than you need. The changes in this update solved the few downfalls we saw in the original — so overall, it’s a much-improved tailgate pad. And if you own one, no doubt you’ll be happy (you can snag one as of this writing on the brand’s Indiegogo campaign for an early-bird discount).

But if you’re shopping and on a budget, there are less expensive options on the market. And just like the old bath towel, they’ll probably do the trick if all you want is security and protection for your bikes and truck. But if you spend based on quality construction, expected durability, and a few premium features, the RMU Tailgate Locker 2.0 packs it all.

The Tailgate Locker 2.0 comes in two sizes for mid- and full-size pickups. It’s live on Indiegogo now starting at $159 and will retail for $239.