At CES, Toyota laid down a plan that shocked us. Freight, autonomous driving, and mobility for people with lower-limb paralysis were all included in Toyota’s plans for the future.

The automotive industry must become high-tech before high-tech becomes automotive, stated Toyota at a massive press event in Las Vegas. And its plans are certainly technology first.

We met with the brand at this year’s CES show — America’s largest tech trade show, where wacky futures are realized with advancements in technology. Toyota laid out an ambitious plan to seriously improve the environment, the driving experience, and how people get around.

First and foremost, the brand wants to vastly reduce the emissions in the port of LA, the eighth-largest shipping port in the world, in 2020. The cleanup places hydrogen fuel cells in semis, fueling infrastructure, and cargo-handling equipment.

Further, Toyota takes a nuanced approach to autonomous driving with Guardian. And it announced an investment into its mobility foundation, which researches and develops solutions for people with lower-limb paralysis. 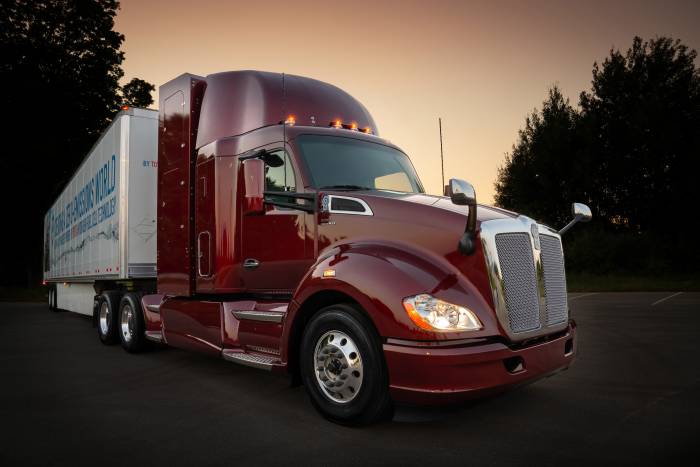 The collab is due in part to a $41 million Zero and Near-Zero Emissions Freight Facilities grant from the California Air Resources Board with the Port of Los Angeles. The Port of LA is the largest and busiest port in the U.S. and the eighth busiest container port in the world.

The grant monies are part of a larger $82 million program that will put fuel cell electric tractors, hydrogen fueling infrastructure, and zero-emission cargo-handling equipment into operation in the ports and LA basin in 2020.

But Toyota also aims to be a net-zero-emission company by 2050, as announced at the press conference this week.

What Are Toyota’s Hydrogen Fuel Cells?

The hydrogen fuel cells generate no emissions other than water vapor. Not to mention the cells are considered extremely stable and safe while creating electricity to power the vehicle. The brands also said drivers experience less fatigue, along with the obvious benefit of no exhaust or emissions whatsoever as they transport cargo across the LA basin.

“This is not just a science experiment; the goal is to make a difference in society. To remove pollution and improve the air quality in and around the Port of Los Angeles,” Bob Carter, executive vice president of Toyota Motor North America, told media.

The program will also fund foundational hydrogen fuel infrastructure. Pending a final investment by Equilon Enterprises LLC (of Shell Oil Products U.S.), two new fueling stations will be developed. These will support the operation of the fuel cell electric trucks in southern California, each with a range of over 300 miles under normal drayage operating conditions.

Toyota Guardian Will Amplify Human Control, Not Remove It

Toyota announced its progress on Guardian, a semi-autonomous driving system that intends to amplify, not replace, human control of the vehicle. The breakthrough announced at CES was how Guardian combines the strengths of both human and machine. 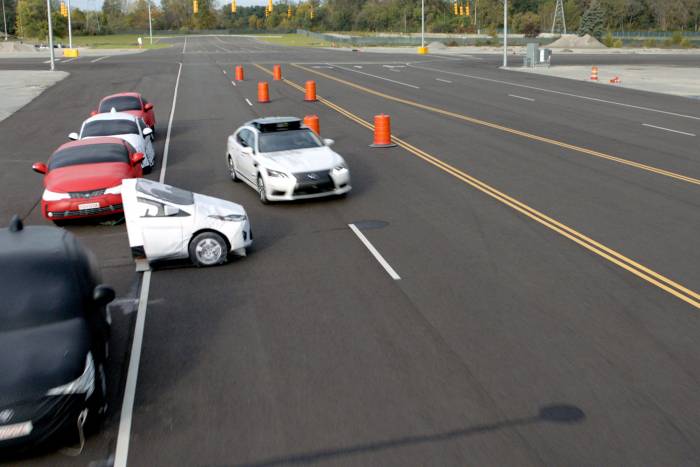 With the Toyota Guardian, the driver is in control of the car at all times — except in those cases where the car anticipates or identifies a pending incident and responds in coordination with driver input.

But this control system is much more difficult to create within a car. It needs to be defined not only by vehicle dynamics but also the vehicle’s perception and prediction of all things in its immediate environment.

Toyota hopes Guardian is a near-seamless blend between the driver and its autonomous systems. Currently, the automaker is developing Guardian as an automated safety system capable of operating with either a human driver or an autonomous driving system. But the brand also plans to open the technology up for other vehicle manufacturers to use.

“In the meantime, we have a moral obligation to apply automated vehicle technology to save as many lives as possible as soon as possible,” said Dr. Gill Pratt, TRI CEO and Toyota Motor Corporation Fellow.

For Guardian to learn and get smarter, the driver must subject it to difficult driving scenarios — cases deemed too dangerous to perform on public roads. 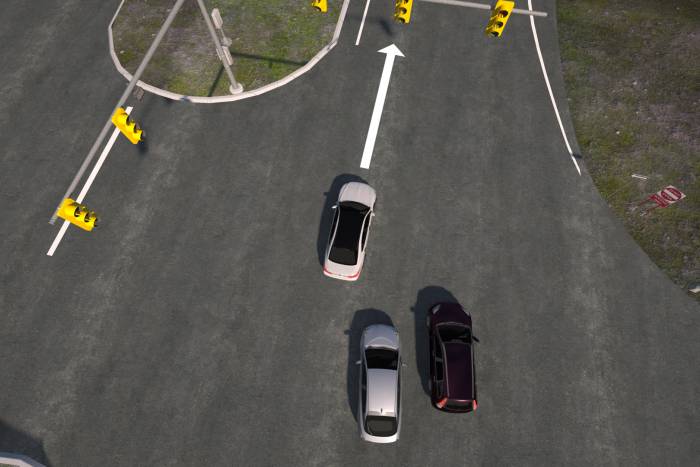 On closed courses, the driver can stretch and challenge Guardian’s intelligence and other capabilities. Through continuous refinement, Guardian learns how best to navigate and react to extremely dangerous scenarios.

At the show, a dangerous three-car incident on a highway unfolded before Guardian’s sensors and cameras.

From that data, the car developed an accurate simulation and then translated it into a learning tool so it could figure out its options in a split second. The scenario was then recreated on the test track using real vehicles and a guided, soft-target dummy vehicle.

In this instance, Guardian’s best option was to quickly accelerate for daylight and away from encroaching vehicles. Here is a case where Guardian might avoid or mitigate a collision for itself while potentially doing the same for other nearby vehicles. This tech is downright altruistic.

The Driver Experience With Guardian

Pratt addressed another aspect of Toyota Guardian that makes the system more evocative for those who enjoy driving.

“We humans have an inherent need for autonomy, which is much stronger than our desire for autonomous cars,” said Pratt. “It’s about the sheer delight of mobility when a child first learns to stand up and giggle its way across a room without the help of mom or dad. And it is the joy of just going for a drive behind the wheel of a car that can accelerate, brake, and turn as if an extension of your body.”

The joy of driving is an inherent and deliberate component of Guardian. Hands on the wheel and eyes on the road are first and foremost when it comes to safety. But it’s not all about safety. It’s also about how a driver feels behind the wheel — safe and secure to enjoy the drive instead of the ride.

And it’s about the democratization of safety. Toyota and Lexus pioneered this philosophy nearly three years ago when it began providing automatic emergency braking as standard equipment in nearly every model and trim level sold in the U.S.

“We think the most important benefit of automated driving is not about the autonomy of cars,” concluded Pratt, “but about the safety and autonomy of people.”

Also this week, the Toyota Mobility Foundation awarded $4 million to five engineers, innovators, and designers from across the world. The award winners submitted designs for game-changing technologies, incorporating intelligent systems to improve the mobility and independence of people with lower-limb paralysis. 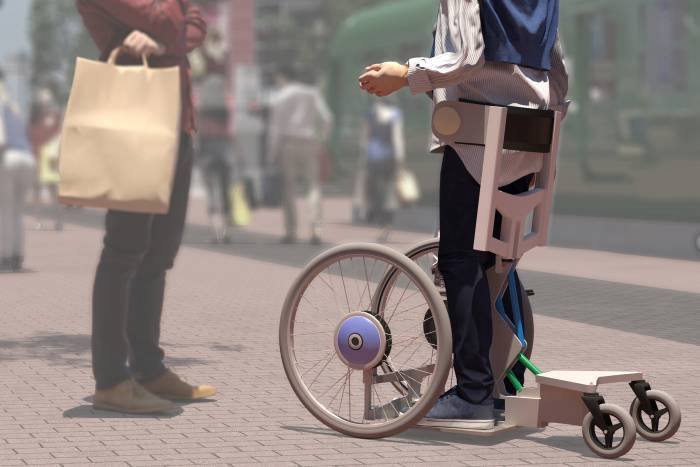 The global Mobility Unlimited Challenge included devices ranging from a hybrid exoskeleton on wheels to a powered wheelchair share plan. Each finalist gets a $500,000 grant to develop their idea further. The final winner will receive $1 million in 2020 in Tokyo.

The Evowalk by Evolution Devices (United States) is a non-intrusive sleeve that goes around the user’s leg, has sensors that track the user’s walking motion, and will stimulate the right muscles at the right time to improve mobility.

Moby by Italdesign (Italy) is an integrated network of wheel-on powered devices, allowing users of manual wheelchairs the convenience and benefits of a powered chair. It’s accessible via an app-based share scheme.

Qolo (Quality of Life with Locomotion) by Team Qolo of the University of Tsukuba (Japan) is a mobile exoskeleton on wheels that allows users to sit or stand with ease.