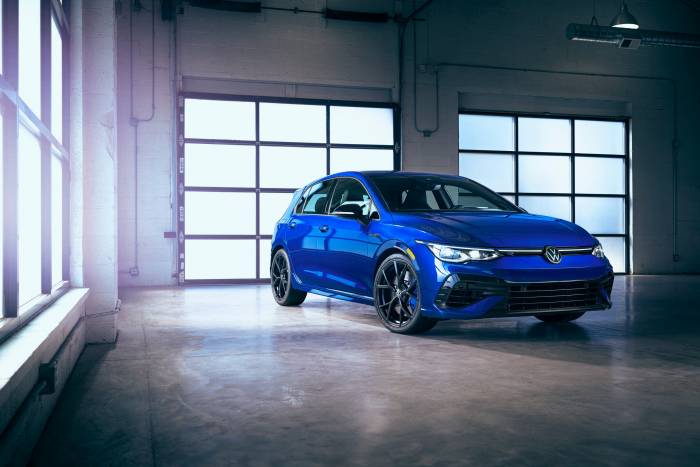 The Golf R has been doing fast and subtle for 20 years. Naturally, Volkswagen is celebrating with an equally subtle Anniversary Edition.

The Volkswagen Golf R, the fastest version of the hatchback, has just turned 20. So VW is building a special 20th Anniversary Edition of the car for 2023 with less weight and some special touches. Just 1,800 will be sold in North America.

Let’s first look back at 20 years of Golf R history to see how we came to this latest fourth-iteration rocket bunny.

The first of the fastest Volkswagen Golfs was called the R32. Launched for the 2003 model year, this was a very special Golf — it was the first production car in the world with a dual-clutch gearbox.

Powering the car was a 238-horsepower 3.2L VR6 engine taken from the Audi TT, 4MOTION all-wheel drive, and sports seats made by Konig. A massive hit in Germany, the R32 stood out from the standard car with its side skirts and bold new bumpers front and rear.

The R32 Continues for Another Generation

A new model went on sale in 2005 based on the then-new Golf chassis. It had an updated 3.2L VR6, making 10 more horses. This one didn’t make it stateside until the 2008 model year, limited to just 5,000 built. It established the formula of building a version of the Golf that was even faster than the Golf GTI but looked as sedate as the standard versions of the car.

For the Mark VI Golf, an R version came to the U.S. in 2012. It used a 2.0L turbo-four that made 256 horsepower. It still offered all-wheel drive and still came with a body kit unique to the model, but it was tough to tell apart from its GTI siblings.

The Mark VII Golf R didn’t make any big changes to the now-familiar formula. A 2.0L turbo-four made 296 horsepower, a six-speed stick or seven-speed dual-clutch were offered, and it had AWD. This time, it added dynamic chassis control, Volkswagen’s adaptive damping system that offered Comfort, Normal, and Race modes.

This brings us to the latest Golf R, introduced last year and based on the eighth-generation Golf chassis. Now the Golf R makes 315 horsepower, and buyers in the U.S. and Canada opted for the six-speed stick so frequently that they are the only two countries where it’s offered. Everyone else gets the seven-speed DSG only. It’s this mark VIII Golf R that is the basis for the 20th Anniversary Edition.

In keeping with the Golf R’s legacy of subtlety, the 20th Anniversary changes aren’t big or flashy. But some of them are quite useful.

Dropping the panoramic roof, for example, cuts pounds from the car at the best point to improve handling and agility. VW says it streamlines the look, too, but we’re not so sure about that one. It likely does improve headroom, though.

The wheels are the same as the standard Golf R (VW names them Estoril), and they wear the same 235mm-wide performance tires. But VW has painted the wheels gloss black for this one, telling those who know the brand they’ve got the special one at a glance.

Lapiz Blue, the signature R color, will be offered. Deep Black Pearl and Pure White will also be available, and all three get limited allocations. Volkswagen is painting the mirrors on black and white cars in the same Lapiz Blue, a tribute to how important the color is.

Inside, the dash and front doors are trimmed with real carbon fiber. VW says it’s the first time it has done that on a production car. A new and large blue R logo is on the steering wheel.

20th Anniversary Edition Golf R a bit of a Bargain? 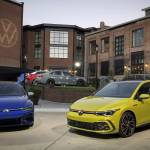 We attended Volkswagen’s Family Media Drive event in Asheville, N.C., and drove the all-new 2022 GTI and Golf R in the hills near the Blue Ridge Mountains. Read more…