Stretchy nylon and a whole bunch of double-sided Velcro come together in a tiedown option unlike anything we’ve tried before. 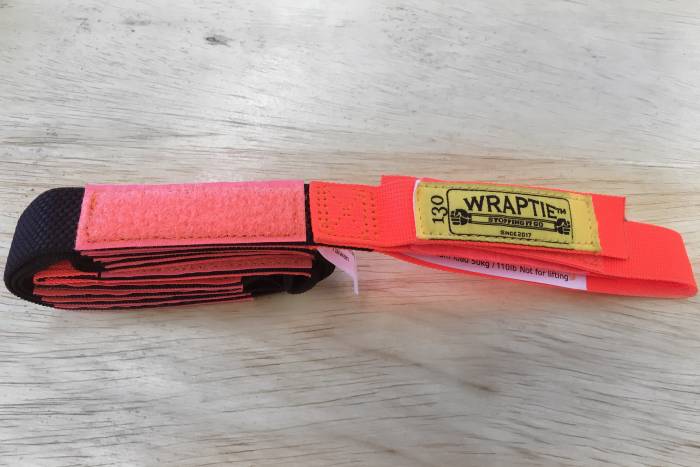 If you own a truck, you probably own some ratchet straps too. Those heavy-duty tiedowns are great for mega-loads on 18-wheelers. In fact, they’re pretty much irreplaceable.

But what about moving a cabinet in your pickup, or securing a kayak onto a Corolla? Heck, what about lashing a few extras to your pack or carry-on luggage? The idea of using ratchet straps or bungees is overkill for many scenarios, and they both come with drawbacks in safety and utility. Think pinched fingers, sudden recoil, and scratched surfaces.

Well, that’s exactly the impetus behind Wraptie — a hardwareless tiedown strap that aims to be as capable on a roof rack as it is on a backpack. So we put a set of Wraptie straps to the test going through airports, on daily commutes, and for moving large furniture. 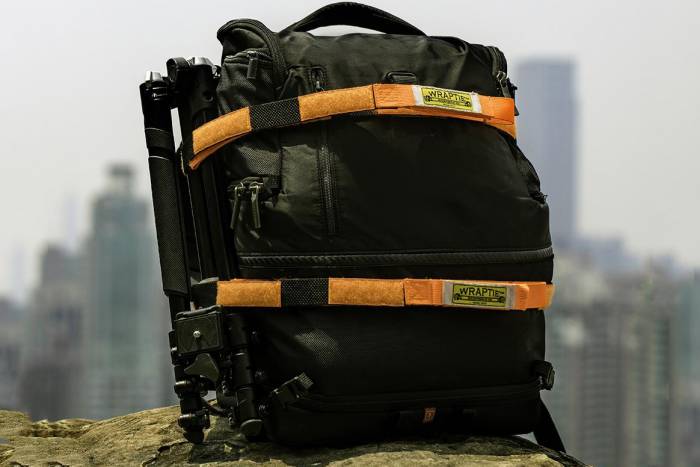 In short: Wraptie straps are great for anyone doesn’t need large ratchet straps and is looking for something safer and easier to use than bungees. The straps are available in a variety of lengths, are extendable, and proved very easy to use in our tests.

Plus, the company has begun using the equivalent of one plastic bottle’s worth of recycled material in its production. For anyone securing very large loads, however, we’d still recommend a few sets of industrial-rated ratchet straps.

Nearly the entire premise behind Wraptie is Velcro. Each strap consists of alternating lengths of black webbing and double-sided, bright-orange Velcro (hook/rough on one side, loop/soft on the other).

I say “nearly” the entire premise because Wraptie also adds the biggest benefit bungee cords offer: stretchability. The webbing between each Velcro pad stretches, adding length when you need it and making it easier to line up the Velcro pads when securing (more on that below).

Each strap is rated to hold 50 kilograms (~110 pounds) without snapping and has two different ends. On one end is a fixed loop, ideal for feeding the strap through to secure to a truck bed anchor or daisy chain. The other end is multipurpose — it serves as a terminus end or second loop, or it can be un-Velcroed and used to attach another Wraptie. See the video below.

The brand currently offers straps in three lengths (designated in centimeters) for various purposes. Wraptie recommends the large 240 straps for securing surfboards or kayaks or moving big furniture. The medium 180 straps work best for securing gear on the back of a motorcycle or bundling and carrying a load of firewood. And the 130 straps we tested are designed to add extra gear to a pack setup or lashing smaller items to a bike.

Wraptie Straps: How They Work 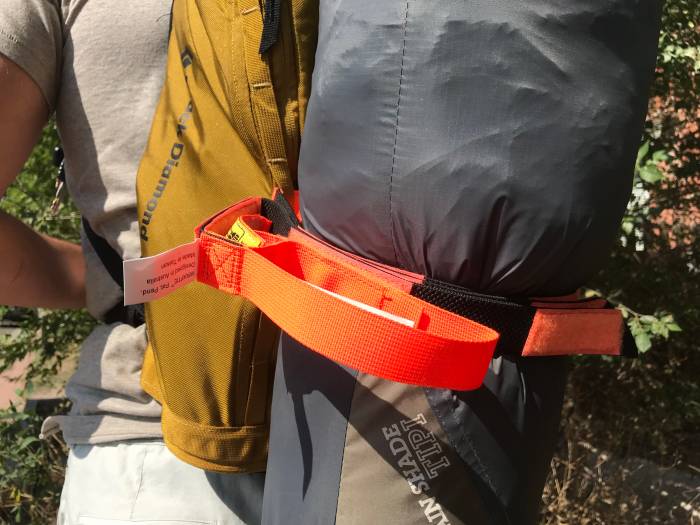 The straps are simple and intuitive, but there are a few points to know. First and most importantly, make sure you can secure at least three Velcro pads. Anything less, and you risk the strap coming undone under normal load.

Also, to properly line up the hooks with the loops, you have to twist the strap after you’ve wrapped it around the load. I wasn’t crazy about this, as a twist creates a weak point, albeit under stress much greater than normal use. Plus, it just makes my skin crawl to have a twist in the strap.

Finally, make use of the stretch. To fully align the entirety of each Velcro pad, you will have to tug as much length out of the strap as you can. Don’t worry about rewrapping your gear if pads look like they fall short; just tug on the thing and make it work! 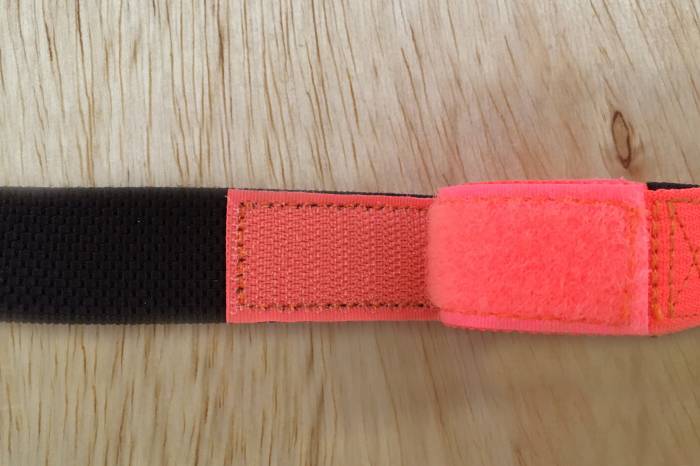 The first time I used the Wrapties was in the back of a U-Haul before a 900-mile trek from Minneapolis to Denver. At just 1.3 meters long (about 4.25 feet), though, they were not quite the ideal tool for the job. But using the multipurpose end, I combined two 130 straps to get about 8.5 feet, which I used to hold a set of lockers in place. After two days and about 18 hours of interstate driving, the lockers stood just as I’d left them.

It’s important to note that you can connect only two straps together, as you will end up with two closed loops and no way to attach a third strap. Additionally, Wraptie cautions that as the load diameter increases (the wider you stretch the straps), its strength decreases. So the brand recommends opting for longer straps designed for bigger loads over connecting smaller straps if strength is a question.

Ultimately, though, the 130 straps proved best suited to more mundane tasks: in my case, adding more items to my carry-on luggage. Turns out, the Wraptie straps are a nifty airport hack. I managed to lash a bike helmet and extra personal item to the outside of my carry-on, freeing up my hands and making the whole airport ordeal a bit less cumbersome.

And starting at $29 for a pair of straps, the straps are an inexpensive option. 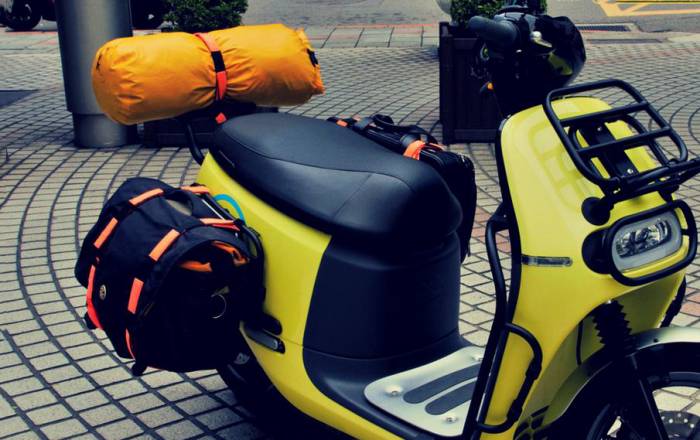 After a few months using these straps, I can attest they’ll continue to find plenty of use until they wear out. And frankly, I’m curious when that will be, as my only concern is the longevity of the Velcro straps. After a summer of camping trips, airports, and road trips, however, the straps work as well as they did on day one.

I asked Wraptie co-founder Mark Blackburn about this, and he told me the brand guarantees the straps for half a year. But in testing, he’s yet to see any significant wear after years of use.

“The product is guaranteed for six months,” he said. “However, over the past two years, we have tested the straps almost continuously, with several groups of users — delivery bikes, plumbers, tradies, builders — who use this product daily, outside and heavy-handedly. So far we see fading of the orange, but the Velcro is still going strong.”

Ultimately, the best and worst of these straps is the Velcro, and the user will determine whether a set of Wrapties is the right option. In addition to Velcro’s lifespan, it also has a nasty habit of picking up debris. So if you’re someone who chucks tiedowns into a pile outside, these straps will go haggard pretty quickly. 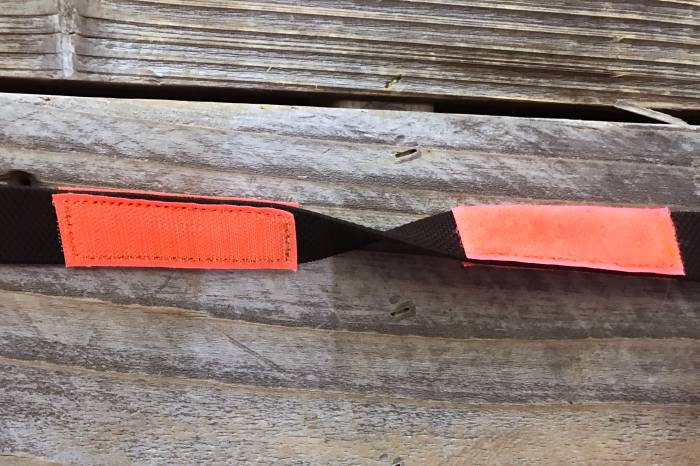 Also, as noted above, if you’re hauling wind turbine blades on the back of a flatbed, ratchet straps are still your best bet. But for those who use tiedowns to lash together gear, bundle some kindling, or move the occasional sofa, Wrapties take the hassle and scratch potential out of securing a load.

Learn more, or pick up some Wrapties starting at $29 per pair.