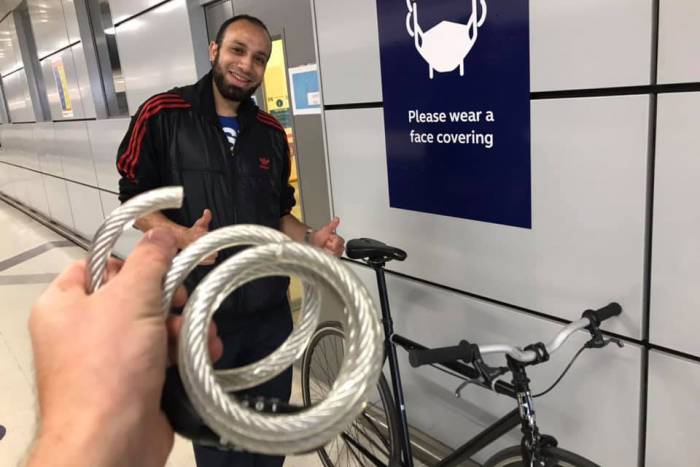 A London man returned after work to find a cut lock and his bike gone. But his faith in humanity was restored, along with his wheels.

Anyone who’s ever had a bike stolen knows the feeling: confusion, followed by disbelief, eventually leading to outright fury. Steve Farmer, a 39-year-old British man, was well on his way to fury after returning to the London train platform to retrieve his bike and ride home from work.

“Left work at 6pm to find just the cut lock and no bike, resigned to never seeing my trusty stead again,” Farmer wrote in a Facebook post. But before he could spiral into a cycle of mistrust, cynicism, and walking, his fortunes turned.

“I heard the sound of a lock being snapped and I didn’t think twice. I said ‘You’re not taking that [bike]’,” Abdul El-Gayar told the Express and Star. A South Eastern Railways employee working at the platform where Farmer’s bike was parked, El-Gayar said he intervened in the attempted theft.

“Voices were raised a little — I said ‘It’s not your bike’. I have a bike and cycle to work — I know what value they have to people,” he said.

But the kicker is that El-Gayar watched over the now-unsecured bike until its owner, Farmer, returned — four hours later!

Needless to say, Farmer was stunned when El-Gayar, a man he’d never met, wheeled up his bike and handed it back.

“The world needs more Abdul’s, he is a legend of a man and a credit to his employer,” Farmer praised on his Facebook, along with a picture of the cut lock, bike, and a smiling El-Gayar.

While the would-be thief was not apprehended, information on the incident was reported to the London Police.