In what officials say is only the second fatal incident in 100 years in Washington state, a cougar attacked and killed a biker on Saturday. 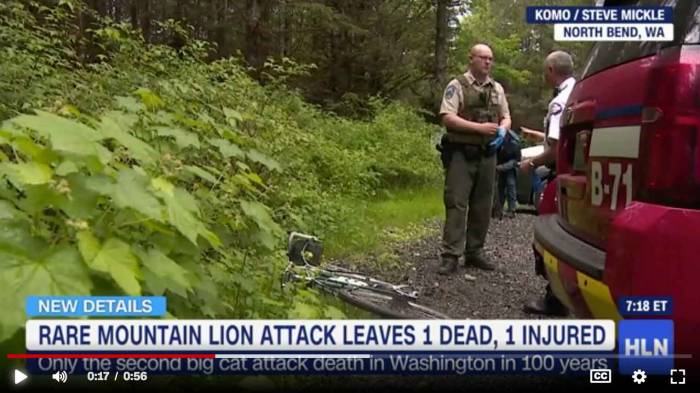 CNN and affiliate KOMO report one man was pronounced dead at the scene, and another man was taken to a nearby hospital.

The injured rider had to pedal more than 2 miles to get cell phone reception. Authorities arrived and transported the injured man to a medical facility.

The King County Sheriff’s Office said the riders did nothing to provoke the mountain lion.

Authorities confirmed the mountain lion that killed one cyclist and severely injured another was "emaciated" and behaving abnormally. They also released the identities of both men attacked. Read more…

Cougars are also known as mountain lions, pumas, and panthers, depending on the region and vernacular.

In a news broadcast, Alan Myers of the Washington Department of Fish & Wildlife detailed the incident. He said one rider heard “a scream from his partner and [saw] they’re being chased by a cougar.”

Myers said he advises anyone facing a cougar to make a lot of noise. “Scream and holler, and throw things at it,” he said. He iterated that people should not try and run away from a cougar.

Our condolences go to the family and friends associated with this tragic attack.

Up Next: Canada Protects 4 New Parks, Forest Now Twice the Size of Belgium