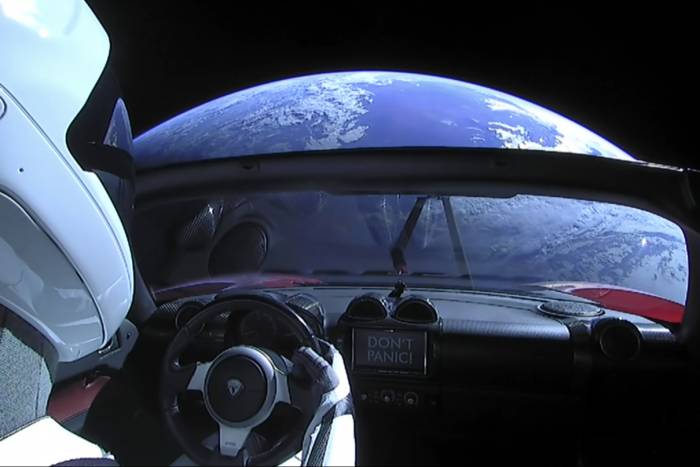 In the 1970s, NASA scientists sent two Voyager spacecrafts into space. They loaded the crafts with music, art, and literature – artifacts that tell the story of humanity. The hope being someday that someone, or something, will retrieve it.

But a lot has happened for our species in the last 40 years: the internet, Hot Pockets, and yoga pants to name a few. But Tuesday, humans – specifically Musk and the team at SpaceX – sent another post-Voyager trinket into the cosmos.

Best of all, you can sit behind the wheel (virtually) and watch as the first car in space floats around the Earth (while eating a Hot Pocket in yoga pants).

In case you’ve been under a rock at the bottom of the ocean in a coma, Musk’s SpaceX program successfully launched the 27-engine Falcon Heavy Rocket yesterday. Its payload was Musk’s own Tesla convertible. And the only crew aboard was a dummy in a spacesuit named “Starman.”

The video above live streamed the Tesla’s orbit of our blue home. But the ride only lasted four hours before a thunderous third burn rocketed the otherwise quiet clean-energy vehicle toward the asteroid belt.

Now, Starman will sit in the driver’s seat as the car shoots through a heliocentric orbit for the next thousand, or million, years.

Initially, the idea was to send the car toward Martian orbit. But the planned burn overshot the Red Planet and sent Starman on a trajectory toward the asteroid belt. That means before circling back in its new orbit, Musk’s car will travel some 300–400 million miles from his garage. And the odometer won’t move a tick.

Eventually, though, either space debris will obliterate the Roadster in a barrage of micrometeorite collisions, or unchecked radiation from the sun will literally disintegrate the vehicle.

But until then, Starman, leave the top down and radio on. It’s going to be one hell of a ride!

Up Next: Patagonia Launches ‘Dating Site’ for Outdoors Activism