If you’re looking for a no-holds-barred film of wintersports wizardry, the sixth season of ‘Out of Service’ has exactly what you need.

It’s immediately clear from the first minute-and-a-half that this latest edit of badass snowboarding isn’t messing around.

Unlike many other recent films, you won’t have to deal with any filler from an artsy, trying-too-hard, second-year film student.

The latest entry from YouTube’s Shred Bots gives viewers the action from the start — and then doesn’t let up from there. Also, it’s got more than just snowboarding, with plenty of snowmobiling fun as well.

If a half-hour of winter stuntin’ sounds too short, then this vid was made for you. 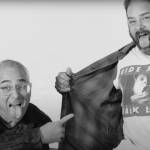 'Rough Around the Edges': 30 Years of RIDE Snowboards History in One Film

Follow along on a journey through 3 decades of tumultuous snowboarding history as told by the people who lived it. Read more…