A little-known trail is being plotted across a vast swath of South America. It’s not published on maps (yet) and is known only to a few adventurous souls.

The Greater Patagonian Trail (GPT) is 1,300 miles long and counting. It is a growing network of backroads and rutted trails stitched together to form an enormous route across South America, and almost nobody knows about it.

That’s because it’s been built quietly, the entire route put together by one couple who hope to share a love of hiking with the world.

The GPT is already the largest trail in South America by far. No other trail on the continent extends beyond 500 miles. When completed, the GPT will rival both the Appalachian Trail and Pacific Crest Trail in scope and beauty.

However, it’s very informal by North American standards. Currently, the GPT is formed by 27 sections from 20 to 100 miles long. It begins in the Maule Region of central Chile and extends south into the Chubut Province in southern Argentina. 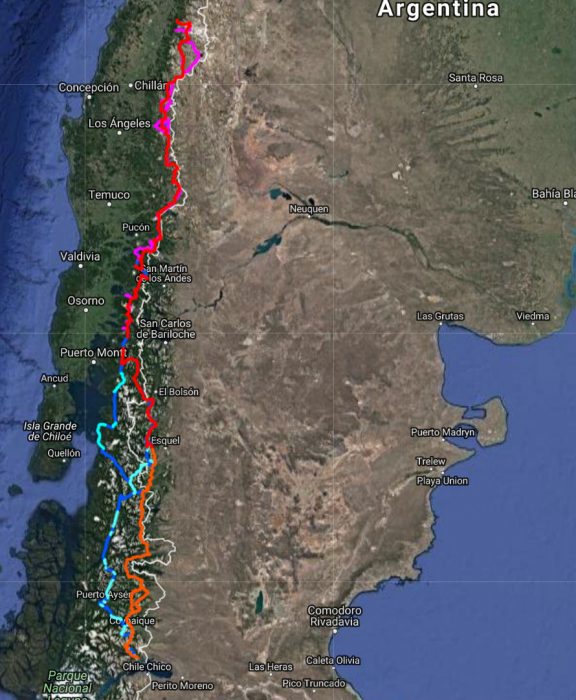 Swiss-German hiker and explorer Jan Dudeck and Chilean hiker Meylin Ubilla are hiking and plotting a patchwork of unmarked hiking and horse trails, and minor dirt roads. Together, the duo records GPS coordinates and trail section details, then publishes them on the GPT WikiExplora page.

There is no government money or influence on this trail. The pair notes on the GPT page that politics do not influence the route of the trail. They say it’s being designed to be the most attractive hike-able route, without any influence or other interests.

Ultimately, the goal is a path through rugged and beautiful environs, from south of Santiago, Chile, all the way to the southern tip of the continent through Patagonia.

The couple has not decided on an end point, but Tierra del Fuego is one possibility. When finished, the route will span more than 2,000 miles.

Greater Patagonian Trail: How To

Details on the GPT are not easy to find. The only resource for information thus far is on the couple’s WikiExplora page. There is a trove of info, but it is dense.

The pair published a host of GPS coordinates for trail sections, nearby towns for resupply, and some noteworthy sites and annoyances along the way.

Here’s some helpful info on the trail and how to tackle it:

Greater Patagonian Trail At A Glance

Who Are Jan Dudeck And Meylin Ubilla?

The pair hatched the idea in 2011 after attempting a thru-hike of the region. They began work to piece the GPT together two years later.

The pair were semi-experienced hikers who took on the Patagonian thru-hike challenge for the first time in 2011.

They planned to follow some trails recommended in a guidebook, but the locals informed them much of their planned route was off-limits to backpackers.

After some back and forth with locals, Jan and Meylin opted to rough it themselves, with no guide or direction other than the recommendations of locals.

“We were surprised to walk on well-maintained trails where maps are simply blank,” Dudeck writes on the Wikia page. “In the following months and years, we repeated this experience and learned that there are plenty of perfectly hikeable trails where maps show nothing but wilderness.”

Beginning in 2013, they took on the arduous task of walking, recording with GPS coordinates, and visually mapping a route beginning in northern Chile.

The plan is to end the trail at the southern tip of the continent, near Tierra del Fuego or perhaps at the Strait of Magellan.

If you’re not ready to hike the GPT just yet, a forthcoming documentary on the first videoed thru-hike of the trail is slated for next year.

“Unbounded” is the brainchild of director and adventurer Garrett Martin. Along with a team of three other hikers and explorers, Martin will film the four-month expedition through Patagonia.

Canada is about to finish the world's longest trail network. Lace up your boots, pump up your tires, ready your paddles, and prepare for 24,000km of adventure. Read more…

He literally crossed paths with Ubilla and Dudeck as they plugged away on their project. As a result, the pair’s work will now be visible for the first time outside of the WikiExplora page.

Martin’s aim is to promote the trail and beauty of the region. To that end, a portion of the film’s proceeds will go to Conservacion Patagonica, which helps preserve natural habitats throughout Patagonia

To learn more on the forthcoming documentary and support the project, check out the “Unbounded” Kickstarter page. For more info on The Greater Patagonian Trail, check out the WikiExplora page.

It’s a grand project and one that could result in a spectacular new trail for those yearning for a new adventure.

Up Next: Dog Safety: 7 Items For The Field This Fall