Home » Outdoor » How to Poop in the Winter: ‘Leave No Trace’ Tips

Most people know how to dispose of waste properly in the summer, but what about in the winter? Use these tips to do your business responsibly.

Subzero temperatures and 40mph winds may make dropping your pants in the backcountry a bit more challenging in winter. But in order to stay in line with Leave No Trace practices, it’s just as important to understand proper waste disposal techniques in frigid conditions.

It's pretty simple: If you buy a dog, you buy all of the poop, too. Throw that crap away and quit leaving colorful little doggy bombs on the trail for others to collect or step on. Read more…

The goals are still to minimize the impacts of human waste: pollution of water sources, potential spread of disease, and aesthetic/social effects. But permanent snow coverage throws a curveball. Before digging into these four tips, be sure to check with land managers for the areas you’re visiting. Most have site-specific recommendations for waste, so it’s crucial to know those guidelines.

There’s no soil for digging.

If you’re going to bury your waste, you still need to follow Leave No Trace recommendations and dig a cathole 6-8 inches deep and at least 200 feet from water, camp, trails, and drainages.

However, the hole must be dug in soil. This is actually not the most ideal solution — for a few reasons. First of all, snow cover sometimes amounts to feet, so getting to the ground takes work.

Stop sharing your adventures before our wild spaces are 'loved to death.' Read more…

Also, there may be fragile and rare vegetation under the snow cover. Recovery rates for vegetation are very low due to a harsh environment and a short growing season, so digging up the unknown could be damaging in the long term.

Lastly, decomposition rates vary for all environments but are especially slow in the cold, and even more so under dirt that’s under snow.

Bagging your human waste and toilet paper to pack it out is the best scenario. There are two common “bags” out there.

The “blue bag” is a double-bag system. A thin cellulose bag acts as the “deposit” bag. You pick up solid waste as you would for a dog, then put that bag into a thicker and more durable outer plastic bag for safe transport. Another similar product is the Restop2, which has a bag-within-a-bag to securely store waste. 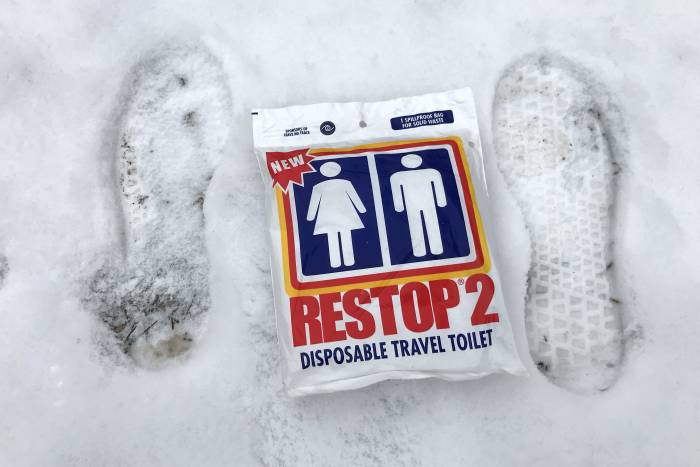 The “W.A.G. bag” operates similarly but has a special powder that gels when moistened and neutralizes the pathogens in feces. Again, the inner bag is placed in a thicker and more durable outer bag for transport.

For serious pooping in bigger groups on more popular mountain routes, most people rely on a Clean Mountain Canister (CMC) system distributed from ranger stations. There’s a screw lid and sometimes a seat. Used CMCs are collected at designated locations and taken to a septic treatment facility for cleaning and reuse.

Depositing human waste in a crevasse is standard practice for some mountains, but research shows that pathogens from fecal buildup remain viable. Thanks to warming temperatures, most areas expect crevassed waste to reach the glacier’s ablation zone and melt out into the waterways.

Denali is a perfect example. More than 1,000 climbs attempt an ascent of Denali annually. For years, Denali National Park rangers told climbers to collect their poop in biodegradable bags using the CMCs, then pitch the bags off into the deep crevasses below 15,000 feet.

But recent concerns over leaking fecal matter have altered some thinking. Since the first ascent in 1951, Denali National Park estimates that up to 215,000 pounds of human waste have been deposited into Kahiltna Glacier. In order to control the anticipated poop issue, rangers allow climbers to pitch bags of waste from above into only a single marked crevasse at 14,200 feet (Camp 4). Poop below Camp 4, and you need to carry it out.

Snow is a water source in winter conditions. People may be drinking or cooking with the snow you pee on! Contaminated snow can result in crummies in the tummies, including vomiting and diarrhea. When camping, establish toilet and latrine areas. Urinate away from camps on rocks when possible, but if covered in snow, designate a specific spot.

Up Next: 21 Conservation Quotes From President Theodore Roosevelt