The Earth is ours on borrowed time. This is how one YETI ambassador works to protect the resource she loves and relies on for her career as a fishing guide.

You stop the rod, the fly lands, and you follow it as the pale line traces across the water’s surface. Everything else melts away as you patiently wait with anticipation for a wild trout to approach the river’s surface and sip your fly.

Bound by gossamer-thin monofilament, fly fishing gives us an ephemeral connection to nature’s raw energy. Hilary Hutcheson knows this well. The YETI fish ambassador and environmental advocate have made a living with her rod, stalking fish around the world.

She is acutely aware of just how fragile that connection is. In her offseason, Hutcheson tirelessly works to protect our natural resources for the rest of us.

Hutcheson is a busy woman as a guide, small business owner, writer, and climate activist. “It sounds daunting when you say it like that!” chuckled Hutcheson. Like a river coursing through the wilderness, there’s a through-line connecting her work. It’s not high and mighty or political. “It’s a matter of economics,” she stated matter-of-factly.

Protecting natural resources is core not only to helping her clients land that next big fish, but it holds the future of Hutcheson’s livelihood. “You shouldn’t benefit from it unless you take care of it,” Hutcheson shared stoically.

After becoming a river guide in high school, Hutcheson got a degree in journalism. She’s always been drawn to a good story. After 5 years working as a news anchor and reporter in Portland, Oregon, she moved back home to Montana where she co-owned and operated Outside Media and Trout TV.

She now runs her fly shop, Lary’s Fly & Supply (“Lary” is short for “Hilary”), guiding veteran anglers and those new to the sport on the Flathead River and the Middle Fork of the Salmon River. In her offseason, Hutcheson trades her rod and reel for the keypad, writing conservation-based stories for Fly Fisherman Magazine. She also sits on the North American board for Backcountry Hunters & Anglers, the Northern Rockies River Council for American Rivers, and works with Protect Our Winters. She’s writing the story for the future of the sport.

In Hutcheson’s words, “Living, working, playing in the outdoors … every action we take, we all do harm.” In the same way we take care of our homes, cars, and equipment, “if you begin with thinking how you do your very best to protect our resources, then you don’t have to do as much to come back and try to fix it.”

Being an outdoor professional would be a dream job for many of us. But it doesn’t come easy. Follow along as we go directly to the source and learn from pros like Hilary Hutcheson about their success, careers, families, and passion projects “In Real Life.”

Hutcheson’s parents ingrained her big-picture thinking at a young age. As former employees at Mount Rainier, Crater Lake, and Glacier National Parks, her parents brought a free-range style of parenting that encouraged an early passion for the outdoors. But they always stipulated that “you don’t ‘pass go’ until you commit to the resource first.”

Growing up with a healthy dose of autonomy, they encouraged going big. Coming home, however, wasn’t optional.

“If you died, it was over. If you got hurt, you couldn’t go out anymore,” Hutcheson bluntly recalls. “So we were always the kids wearing helmets skiing, riding our bikes, and wearing lifejackets on the river.”

Safety first doesn’t always win friends on the playground, but by protecting her own resources, risks became more calculated, more measured. And it arguably gave Hutcheson leeway for a successful career both on and off the water.

Writing and guiding may seem worlds apart. But Hutcheson simply sees them as a different expression of the same life, only using different tools. “Just like I need both arms to row the boat, I need conservation to sustain my work … I have to do these things or I can’t be a guide,” she said.

Early mornings and long days fill Hutcheson’s summers. She guides clients on the river and has no time to write, staying largely disconnected from her devices.

But with eyes and ears open, Hutcheson stockpiles ideas for her “writing season.” Come fall, after she hangs the rods and winterizes the boats, Hutcheson unleashes her collected thoughts on the page.

On the masthead at Fly Fisherman, Hutcheson’s beat is conservation-based. “Whether it’s the bull trout fishery in the Fernie, Canada, area being impacted by selenium pollution from coal mines or big sugar corporations preventing the natural flow of water south in the Everglades,” she’s constantly poking at the balance of human impact on natural resources.

Her words have garnered national attention too. In 2016, at the end of the Obama presidency, the White House invited her to testify on the impact of climate change on the outdoor industry as part of a report on sports and energy, which they would hand over to the incoming administration. “Once I saw the things I said make it into the report, I knew my voice was making an impact,” she said. This moment encouraged Hutcheson to continue to pursue environmental advocacy on the Hill.

Just as winter snows recharge the water cycle, writing and advocacy fill Hutcheson’s guiding season. Her work has made her somewhat of a celebrity in the fly fishing world. Clients seek out Hutcheson by name to glean nuggets of her knowledge. “The more educated I can be about our ecosystem’s challenges and values, the better prepared I am to answer questions,” she said.

Clients seem to like that. Hutcheson is booked through next summer.

Sun at your back, wind in your hair, chasing elusive trout all day — guiding on the river has a romantic appeal to it. Before you trade it all in, Hutcheson recommends you be able to answer “Why?”

“The worst thing you can do is go and buy a drift boat, a Tacoma, get a yellow lab named Madison, and decide you’re a fishing guide,” laughed Hutcheson. Before you commit to any job, consider why you want to be there. Because, as Hutcheson reminds us, “once you are there, you want to be as helpful as possible” to be useful to the resource, be part of the solution.

For starters, go on a guided trip. Hutcheson spends a lot of her own money on retail-price guides. “I’ll take as many trips a year within my budget to find another fishery different from mine and pay a guide to show me around.”

Fishing is a practice, and Hutcheson is a student of the craft. “It’s supporting the system and adds knowledge to my own operation,” she said. In the end, guiding gives Hutcheson a place at the table with something to give back.

Waders, baseball cap, and sunglasses — the archetypal guide likely conjures the image of a sun-weathered, bearded man. Hutcheson recognizes sexism exists, “but women do belong here. People of color belong here. And we have to work to do in making it a place they don’t shy away from.” Listen closer and you understand Hutcheson is working to protect opportunities for a diverse field of reliable guides.

When she and her sister, Whitney Milhoan (a former guide), got their start, they made a pact. They would scrimp and save to outfit themselves with quality gear — rods, reels, nets, flies. Getting started can be a monumental investment. “But if you are with clients and gear fails? It’s not on the brand — it’s on you.” She wasn’t about to give anyone ammunition to say “I went with a girl” and it failed.

One of Hutcheson’s most important purchases? YETI’s Tundra cooler. It’s durable enough to withstand bears and the rigors of backcountry trips but capable of keeping food fresh for a week on the water. Hutcheson saw the investment as one she couldn’t afford not to make. As an aspiring guide, she “didn’t want to be throwing multiple crappy coolers in the landfill year after year.” And if the Denver YETI store didn’t reclaim her original Tundra for a display, she’d likely still have it, adorned with many years of memories in sticker form.

Hutcheson has emceed YETI’s Tundra Film Tour for the last few years. With COVID-19, YETI’s “Stories From the Wild” tour went on the road this year, showing at drive-in theaters around the country. All nine shows sold out, and all proceeds went to local outdoor nonprofits.

It’s that kind of compassion and commitment to natural resources that reeled Hutcheson in with YETI. “They recognize hard work. They see into the soul of what makes hardworking people tick,” she said. YETI works just as hard as Hutcheson does to protect similar values.

Hutcheson and I met on a Wednesday, the morning following the election. She’d just returned from a road trip to Austin, Texas, where she emceed the last two YETI Film Tour drive-in shows. With a nation divided, and lawyers boarding planes to dispute the electoral count, she still found pockets of hope.

Sitting on the North American board of Backcountry Hunters & Anglers — the voice for our wild public lands, waters, and wildlife — despite profound political differences, members unite on common goals. Blue, red, or purple, “one thing we can rally around is our land.” Focusing on a common goal, people understand the benefits gained from protecting our resources outweigh the cost of ignoring them.

At the end of the day, our most valuable resource may be time. And that’s not lost on Hutcheson. A mother of two teenage daughters, Hutcheson is investing in time with her kids. Following down her path in conservation and writing, her oldest is studying writing with a potential focus on environmental policy.

But that’s no surprise. Hutcheson passed on what she learned from her parents: That the land isn’t ours to use on a whim. Perhaps our greatest opportunity is to instill this perspective in our kids and their kids to follow, that if you protect the resources first, the rest will fall into place. 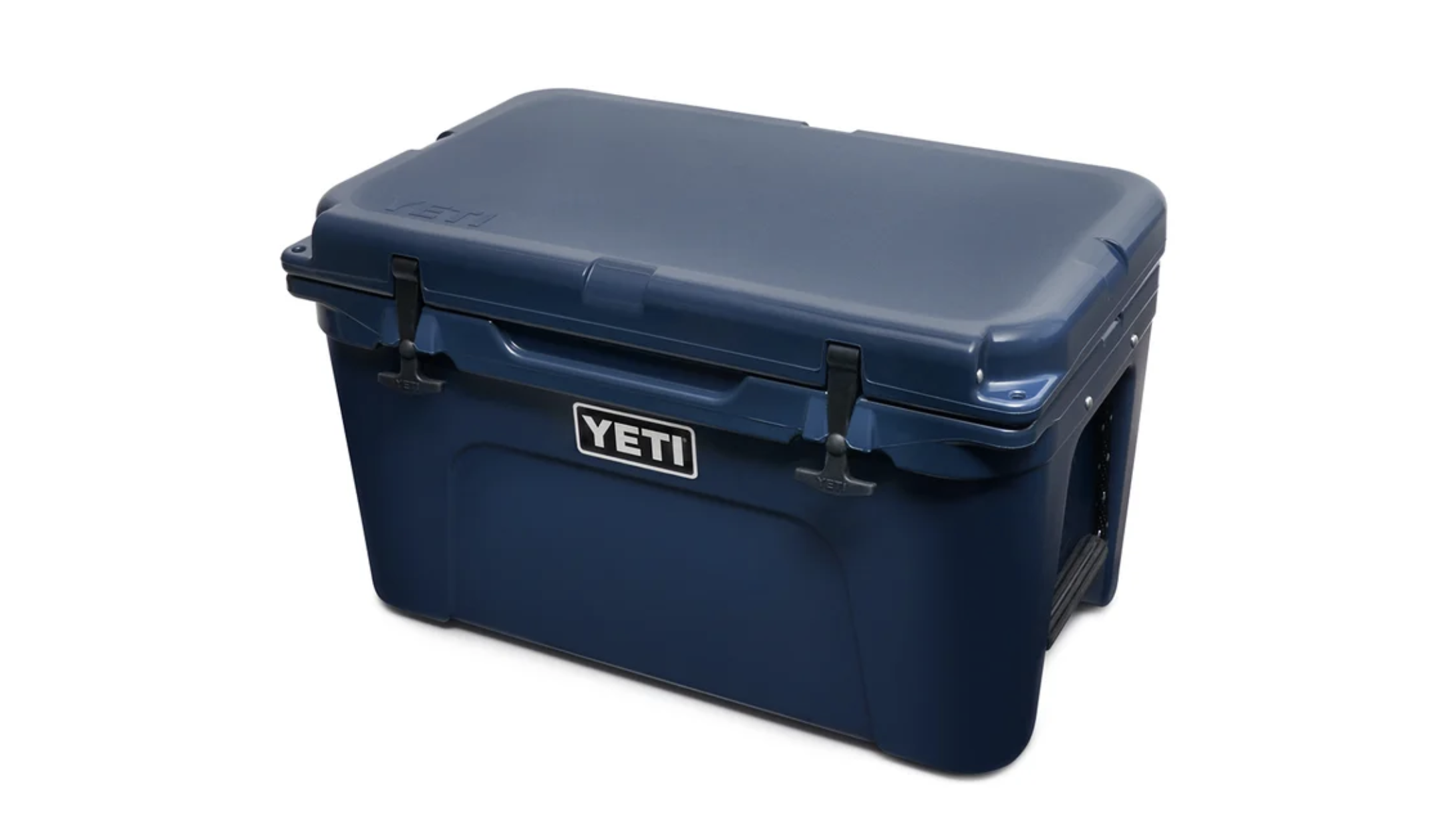 The Tundra 45 is YETI’s stalwart ice chest. Made for everything from long days in the drift boat to multinight adventures in the backcountry, this cooler is ready for the challenge. It has plenty of room for the necessities in the wild without taking up too much space in your truck bed or the drift boat. Built to withstand even the harshest conditions, the Tundra 45 won’t let you down.

See More of the YETI Tundra 45

This article is sponsored by YETI as part of the brand’s ‘In Real Life’ content series.

Up Next: Bikepack Beekeeping: The Craziest Quarantine Activity You’ve Never Heard Of