Decades ago, Leatherman pioneered the multi-tool market. Tim Leatherman, that is.

As a company and a product type, Leatherman has name recognition akin to Kleenex. The term multi-tool and Leatherman are traded back and forth, but the namesake brand (and the man) still sit atop the category that now has a dozen players in the knife and outdoors world.

The company’s headquarters and production facility, based in Portland, Ore, is a 90,000-sq.-foot space and a tangible testament to Leatherman’s success in producing quality products on American soil.

Last month, we took a tour of the facility to witness the company’s USA manufacturing, with Tim Leatherman himself serving as our esteemed guide.

Upon arriving, we entered the front lobby and were greeted by a receptionist who sat between two shelves of noteworthy Leatherman products. Tim Leatherman’s original and first-sold tool, the stainless steel PST (Pocket Survival Tool), was among them, having stood the test of time since its assembly in 1983.

A few minutes later, at 9:30 am sharp, Tim Leatherman stepped through the doors and greeted us with a friendly smile and a solid handshake. As we gawked at the original design of the first-ever pliers-based multi-tool, complete with 12+ implements, Tim humored us with its backstory. 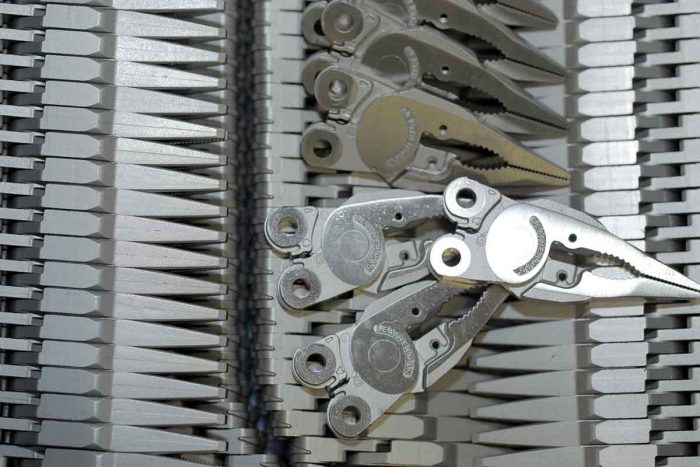 A mechanical engineer graduate from Oregon State University in 1970, Tim had a knack for fixing things. He made many a repair on his “untrustworthy $300 Fiat” with a simple pocketknife.

Consistently needing a pair of pliers for his repairs, he realized there was no tool out there that integrated pliers, knives, and other features into one unit. The experimenting began.

At first, Tim made his prototypes out of old washing-machine parts, welding together each piece until he had the multi-tool he needed. He received a first patent in 1980 and attempted to sell the design to Gerber, a stalwart knife company.

After Gerber respectfully declined his proposal (due to the multi-tool not being a core knife) Tim moved on and ultimately made his first sale of 500 units to Cabela’s, successfully launching Leatherman Tool Group, Inc.

In 1983, the Leatherman Tool Group, which then consisted of 27-year-old Tim Leatherman and his friend and co-founder Steve Berliner, subcontracted factory equipment from Steve’s father’s company. It often took multiple days to create one multi-tool and they made and sold just 200 tools that year.

Today, Leatherman makes more than 8,000 tools per day in a facility that runs all day and all night for most of the week. Leatherman employs over 400 workers.

Shaping Steel Into A Leatherman

To blank steel into individual tools, a die has to be built that will be used in a punch press. Leatherman makes the majority of the dies in-house with climate controlled Electrical Discharge Machines.

These machines cut out precise shapes to form different dies for different tools (such as a screwdriver, nail file, tweezers, etc.) and they’re also used to create individual prototype tools.

Each tool die is worth anywhere from $10,000 to $250,000, Leatherman said, and the facility has a floor-to-ceiling industrial shelf full of them.

Rolls Of Steel To Raw Tools

Leatherman sources its steel from Ohio, which comes in 800-pound rolls that are eventually fed into punch presses. One of the 20+ presses, the H2W300, takes a flat roll of steel, passes it through 17 300-ton strokes with the inserted die, and comes out as a detailed part 26 seconds later.

The machines are gigantic, loud, and impressive to watch. They’re run by workers constantly, 24 hours a day, 5 days a week, and they pump out an astonishing number of individual tools.

Certain tools, such as premium S30D steel knife blades, forgo the punch presses and are instead cut with lasers. 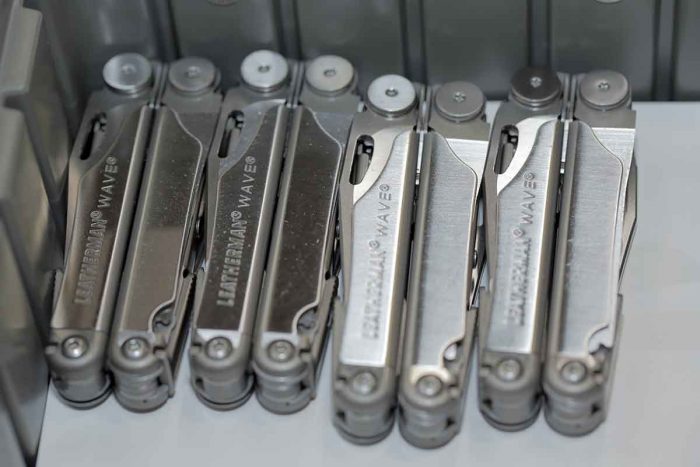 After formation, the tools are heat-treated to increase durability and then polished in large, vibrating tumblers filled with ceramic media and water. The ceramic, with a similar feel to wet chalk, tumbles around the tools for eight hours and slowly de-burrs the edges and polishes the metal.

To finalize the tools before assembly, they’re transported to double-disc grinders that smooth any rough edges and make sure each part is the correct width. Some parts, including the pliers, are picked up by robotic arms and sanded on fast-moving rolls. Sparks fly, and once finished, the parts are transported to the assembly building.

Each of Leatherman’s current 36 multi-tools have a specific assembly station manned by three workers at a T-shaped table.

At each end of the table, the workers place the tools inside opposing handles, gluing parts into place and confirming their reliability. We watched as workers tested each pair of scissors, cutting an edge of a hanging piece of paper to ensure its precision.

Once the two handles are assembled, they’re passed inward to the center, where the pliers are inserted and the handles are joined. Just like that, within minutes, a multi-tool is formed from myriad loose parts.

Every single Leatherman multi-tool made was made in the company’s singular Portland, Ore. facility (with the exception of a period between 1985-1989, when demand outstripped capacity, and the Pocket Survival Tool was made both in Leatherman’s factory in Portland, Oregon and in a factory in Japan). The brand plans to keep it that way.

To stay ahead of China in terms of quality and speed, Leatherman continually upgrades its factory machines and processes. Though it can’t compete with China’s low manufacturing prices, the company is dedicated to its community and has chosen to support U.S. workers and rely instead on quality craftsmanship. 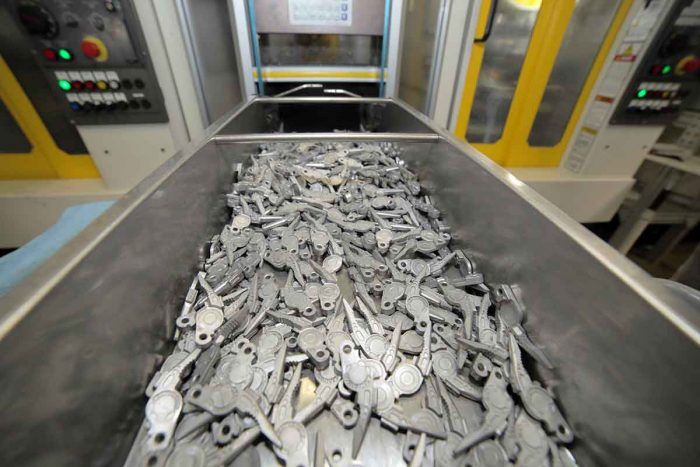 To add to that, the facility houses a team of engineers whose sole responsibility is to improve and invent new multi-tools.

A top-secret “Torture Chamber” enables these engineers to use prototypes, assess defects, test blade sharpness, and perform stress exercises. While we were in there, a machine was stress-testing a nail file; a sticky note informed that the test has been proceeding non-stop for the past five days.

After meeting Tim Leatherman, completing the facility tour, and watching a few multi-tools, including the popular Wave, being made from scratch, it was impossible not to have respect for the company.

It was founded in innovation and durability, and the company has grown into a powerhouse that still sticks to its noble mission as well as its 25-year warranty. 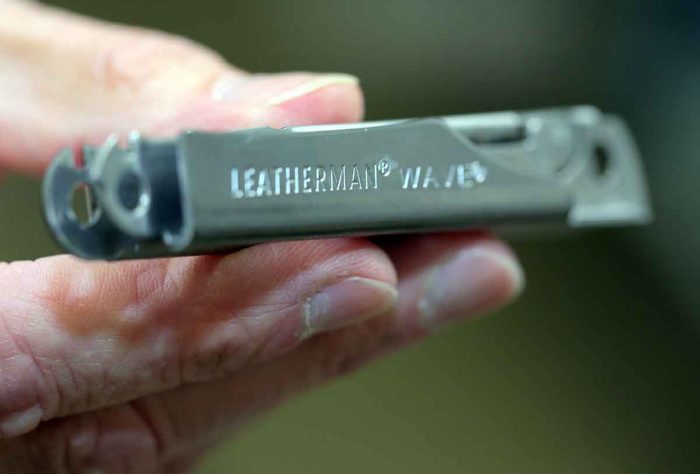 Up Next: Folding Knife Deployment: Flip, Nick, Or ‘Wave’

Saving…
Folding Knife Deployment: Flip, Nick, Or ‘Wave’
Leatherman Signal: How And Why It Was Made