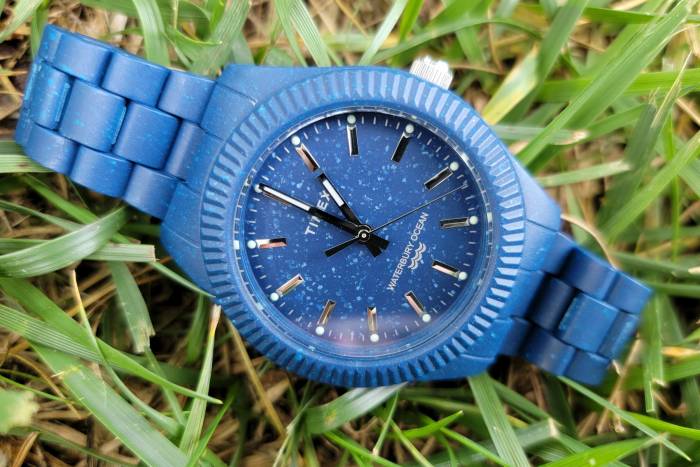 A wristwatch that’s eco-conscious is good. But when it has a price tag under $100, it’s a must-review!

Have you ever stood on a beach littered with plastic? This can be a hard problem for the average consumer to address. Switching to sustainable packaging and bringing your own bags to the store helps, but ever since I spent an afternoon wandering among forks and shampoo bottles in Cozumel, I’ve been looking for ways to cut back.

Then Timex came calling with an offer to send me another piece of plastic. Or rather, the brand offered a great number of pieces, plucked from the seas and spun into a new wristwatch. Priced at $99, the Timex Waterbury Ocean is produced in partnership with #tide Ocean Material, a Swiss company on the cutting edge of recycling tech.

And the Swiss know a thing or two about timekeeping. And after several weeks with this new combined effort, I’d call it a successful pairing.

In short: Timex’s Waterbury Ocean is an interesting concept, aiming to take ocean-bound plastic “From Waste to Wrist.” Despite its paradoxically low 30 m of water resistance, it’s a beautifully designed and affordably priced timepiece that carries a genuine sense of care and sustainability.

So, what exactly is this stuff? According to the company’s website, “#tide ocean material is an award-winning material resource that comes in the form of granules for plastic injection, yarn for textile applications, and filament for 3D printing.”

That’s where Timex comes in. The company (and several other watch companies) are now offering watches aimed at eco-conscious consumers. These include the folks at Luminox, who’ve recently sent along a Survival Master Chronograph spun from the same stuff. But that’s a discussion for another time.

For now, let’s dig into the Waterbury.

We should tackle the recycled elephant first. Whether you opt for the 37mm or 42mm versions, this watch’s case, band, and bezel are made of plastic.

But that’s the point, right? And somehow, the Ocean manages not to feel like a toy. This is due in large part to the excellent polishing on its metal surfaces.

The clasp, the crown, and especially the indices and hands are wonderfully reflective, catching the light with a beautiful sheen. It helps that these latter two aren’t just flat bits of steel. Each has multiple bevels, which further scatter the sunshine.

The plastic itself has some visual interest, too. The case, the band, and the face beneath the mineral crystal all have a natural, speckled appearance, almost like bubbles underwater.

I’m guessing this is part of #tide’s production, and it’s genuinely attractive.

Timex doesn’t provide many details on the movements in these watches. But given the audible and twitchy tick of the second hand, I’d say it’s the same basic module found in their Weekender lineup.

It’s a proven, functional mechanism, and (other than some instances we’ll discuss later) it maintained more or less perfect timekeeping over its stay.

Speaking of Timex mainstays, there’s one that you won’t find here — Indiglo. Instead, Timex applied luminous paint to the minute and hour hands, along with a small dot above each hour marker.

For such tiny applications, this lumen shines incredibly bright. And a quick charge from the sun or a flashlight will carry it through until morning.

Here’s my most significant complaint: With a water rating of just 30 m, it feels weird that a watch dubbed the “Waterbury Ocean” isn’t rated high enough for a swim at the beach.

But Timex is upfront about this. Per its own website, a 30m watch “can have an occasional splash of water.”

So, maybe I shouldn’t have spent a couple of afternoons blasting it with the spray from a commercial-grade sink, plus the requisite after-shift showers. Because on each of these occasions, the watch did stop working for a bit.

The first time, I chalked it up to a possible battery issue. But after the second (and third) instance, I’m sure the blame rests with me.

A little fiddling with the crown and a gentle rap against my knuckles was enough to get the watch going again, once things dried out. But I wouldn’t be surprised if I’ve compromised its long-term durability.

Most of my other nitpicks center around the band. While the plastic links are comfortable and showed no taste for nibbling at arm hair, they’re also all the same size. And with no micro-adjust holes on its pinned setup, this limits fitting to about ±0.3 inches, or perhaps a centimeter.

But take a look at its band next to a few metal bracelets, and you’ll see that the Ocean’s links are indeed closer to the size of a traditional half-link.

You’ll also notice how narrow it is. Combined with the slightly underslung 20mm lugs, it creates a bit of a slim, narrow feel.

The clasp is functional and nicely signed, but it’s certainly abbreviated when compared with a traditional deployment method.

Water-resistance issues aside, I genuinely enjoyed this watch. It’s a hit on multiple fronts — strong design, attractive execution, and a solid $99 price point. And, corporate buzzwords aside, the recycling factor cannot be overlooked.

There are watchmakers out there charging more than $10,000 for timepieces they portray as “sustainable.” For that price, they’d better come with a certificate declaring you the proud sponsor of seven rescued dolphins.

But Timex has skipped the luxury pretentions. Instead, the Waterbury Ocean is a visually interesting and genuinely affordable offering, hip-deep in good intentions. Now, if they could just raise their water rating to neck-deep (say, 50 m), its plastic case might feel a bit more comfortable on a return trip to the beach.