In Texas, a state where cattle and tumbleweeds abound, there’s a mountain that towers 8,749 feet above sea level. No, we’re not joking.

If you would have asked me the elevation of Texas’ highest point last month, I would have guessed in somewhere in the hundreds of feet. But the Guadalupe Mountains of west Texas recently schooled me on just how wrong I was.

Driving east from El Paso, still some 60 miles outside the mountain range, I quickly realized that those were no puny rolling hills in the distance. The 65-mile Guadalupe Mountain range, which crosses from west Texas to southeastern New Mexico, rises 3,000-plus feet above its desert floor and boasts a number of peaks above 8,000 feet.

What’s more, the state boasts its own “El Capitán,” a massive vertical rock face that looms over much of the range.

This El Capitán, not to be confused with the iconic granite crag in Yosemite, marks the southwest tip of the Guadalupe Mountains. It’s an inspiring peak set above a sheer wall of rock. And though a stunning sight to behold in the Texas desert, it’s dwarfed by its neighbor, Guadalupe Peak.

At 8,749 feet, Guadalupe Peak stands as the highest point in Texas. And it’s accessible to most adequate hikers. My wife and I summited the peak this winter and were pleasantly surprised by its scenery — and its challenge.

The Hike to Texas’ Summit

The Guadalupe Peak trail begins at the Pine Springs campground in Guadalupe Mountains National Park. It’s an 8½-mile roundtrip hike to the summit and back, with an elevation gain of 2,930 feet. From the trailhead, the path meanders gently up through prickly pear cacti and junipers. 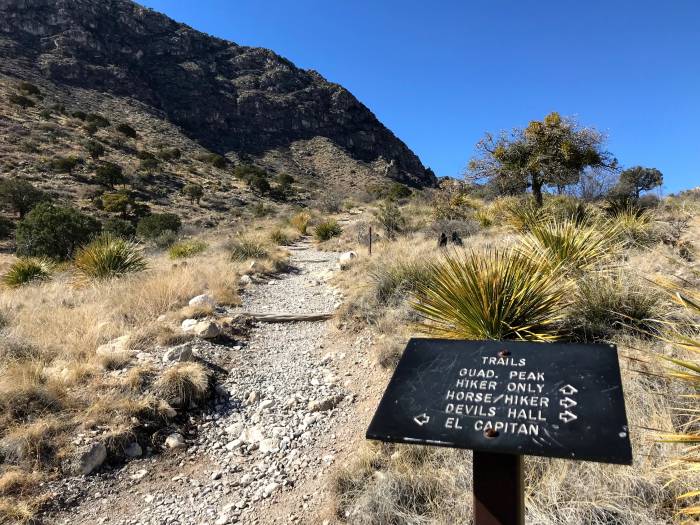 After half a mile, though, the going gets tougher. Switchbacks lead up the side of a mountain and carve into steep cliffs. Eventually, the trail rounds a corner of the mountain and offers impressive views of a valley and wash below. 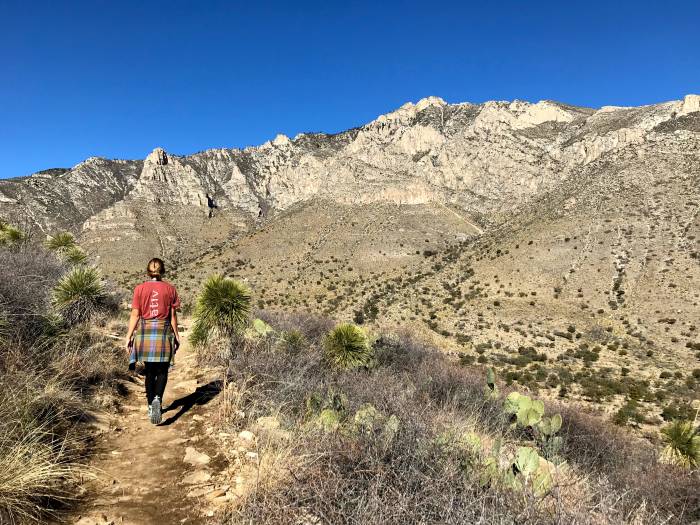 It was early January when we hiked the trail, so snow and ice began to blanket the path as it ascended the north side of the mountain. Halfway up, the desert ecosystem transitions into alpine — complete with pines, firs, and even aspens.

The trail continues its upward trajectory, offering ever-expansive views. Then, a trail sign indicates the location of the Guadalupe Peak Campsite, a five-site backcountry campground situated 1 mile from the summit. Anyone is welcome to set up camp there if they first obtain a free permit from the visitor center.

The final push features a few cliff edges, a footbridge, and a horse-hitching post near the summit. Once at the top, the 360-degree view is seemingly neverending. To the southwest, you can see Mexico. Over to the south and southeast, no mountains obstruct your view of the vast desert below. And to the west, northwest, and north, the Guadalupe Mountains continue out of sight into New Mexico.

Guadalupe Peak: At the Top, Going Down

A 6-foot-tall metal pyramid marks the summit, and a paper log sits at its base for visitors to sign. The sharp peak of El Capitán juts up close by, standing as a stark southern terminus of the Guadalupe Mountain range. 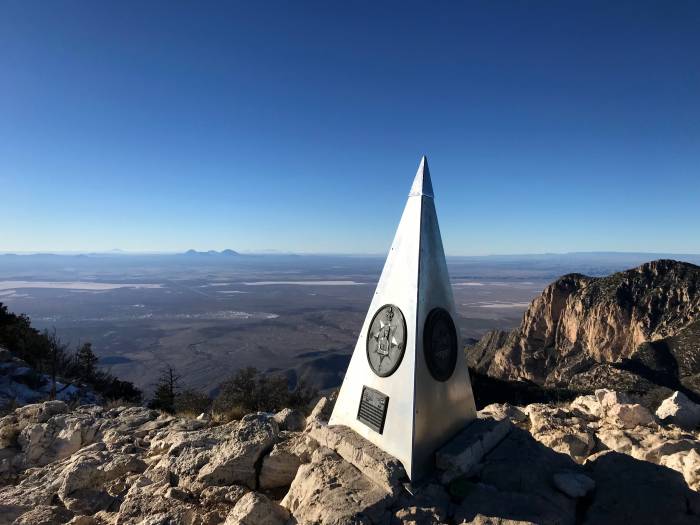 It took us 2½ hours to reach the peak, including a 20-minute lunch break. The descent, though a bit hairy with the icy snow, took us about 2 hours.

We made it down in time for a colorful Texas sunset to softly illuminate our final few switchbacks. After the 5-hour adventure, we filled our water bottles, used the campground restrooms, and rested our tired legs in the car. 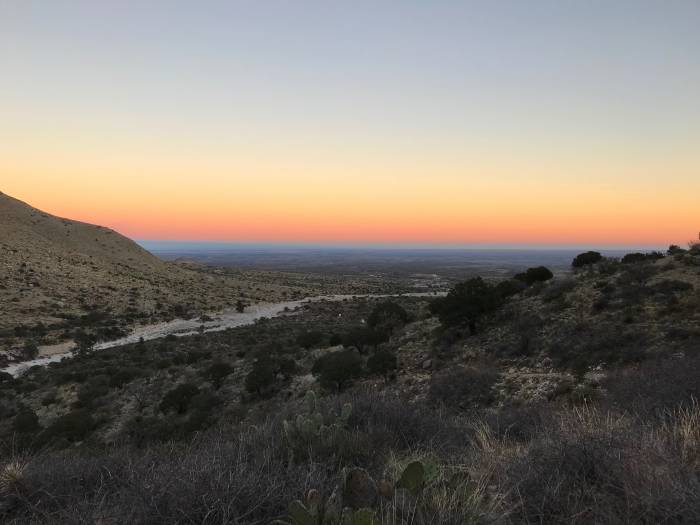 Sure, an 8,749-foot high point isn’t that impressive. It’s a molehill compared to the peaks in Colorado. But, for a state with very minimal elevation, the 3,000-foot ascent and the panoramic views made for quite an adventure.

If you’re ever in the area or aspire to tick off the various state high points, enjoy Guadalupe Peak for the hearty southern mountaintop that it is.

Up Next: Dodge Baggage Fees With the Cotopaxi Allpa 35L: Review