Kristie Ryan is skiing her way out of an identity crisis, and out of her pro skier brother’s shadow, in Salomon’s new short ski film, ‘Hell Yeah Sister.’

What’s a girl to do when she’s grappling with an existential crisis of selfhood and hell-bent on carving a name out for herself?

That’s exactly what Kristie Ryan (sister of pro skier Jim Ryan) does in Salomon’s new film “Hell Yeah Sister.” Tired of being “little Jimmi,” Kristie calls up her friend and ski partner Rose Caston. Rose herself is engaged in a little sibling rivalry; she’s neck-deep in training for the infamous Caston-family sibling cup.

But when Kristie calls in a funk, Rose puts the ping-pong paddle down and steps into her ski boots. And the two ski racers take to the slopes to blow off steam, ripping the resort to absolute shreds. And making both their brothers a little jealous along the way.

It seems like “skiing about it” worked. Check out Kristie’s Instagram, and the description reads, “Not little Jimmi anymore (mostly).”

“Hell Yeah Sister” is a fun, short ski film packed with laughs and great skiing. Check it out on the Salomon Quality Ski Time Film Tour. 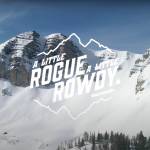 This 'A Little Rogue, A Little Rowdy' Ski Movie Is a Gen Z Magnum Opus

What happens when an international ski brand gives three teenagers a budget and a mission to make a ski film? Things get a little rogue and a little rowdy. Read more…