Surprisingly, sit-skiing is pretty similar to snowboarding — at least, according to Trevor Kennison. And he makes it look pretty easy.

After recovering from his injury and learning how to sit-ski, he made a list of goals. Amongst them: Go to the Paralympics, do a backflip, jump a road gap, and hit Corbet’s Couloir in Jackson Hole, Wyoming.

Athletes are constantly pushing themselves. But gauging the perfect speed and landing just to throw yourself off a cliff — with confidence? It’s crazy impressive. 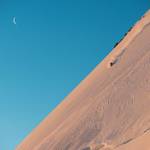 Faction Skis' full-length ski film, 'The Collective,' is an immersive overview of pro skiing. This film is all of that and more, with chilling POV footage and even harder lines. Read more…