With a fully moldable shell and liner, Atomic says the Hawx Prime XTD is the one boot to rule all mountains.

I dread getting new boots. I have wide feet, and usually need to spend some quality time with a boot fitter to get new kicks dialed.

But Atomic’s new descent-oriented Hawx Prime XTD fit me so well after a 12-minute molding process, I haven’t skied another boot for the past 2 weeks of touring and piste skiing across three states and two continents.

Atomic built the moldable-shell, moldable-liner boot with thicker walls of UltraMid in areas that need to be stronger. Everywhere else on the boot uses slimmer walls to shed weight (the 130 stiffness boot weighs 1,680 g in size 26.5) without compromising solid power transfer and downhill performance, Atomic Alpine Commercial manager Jake Strassburger told me.

“We started with thinnest imaginable profile,” Strassburger said. “Then we reinforced the shell with a carbon spine. We thought about everything, knowing the best fit equals the bet comfort. We used buckles that are easy to operate with gloves on, a continuous comfort toebox — without seams on first or fifth metatarsal — and a supportive stock insole.” 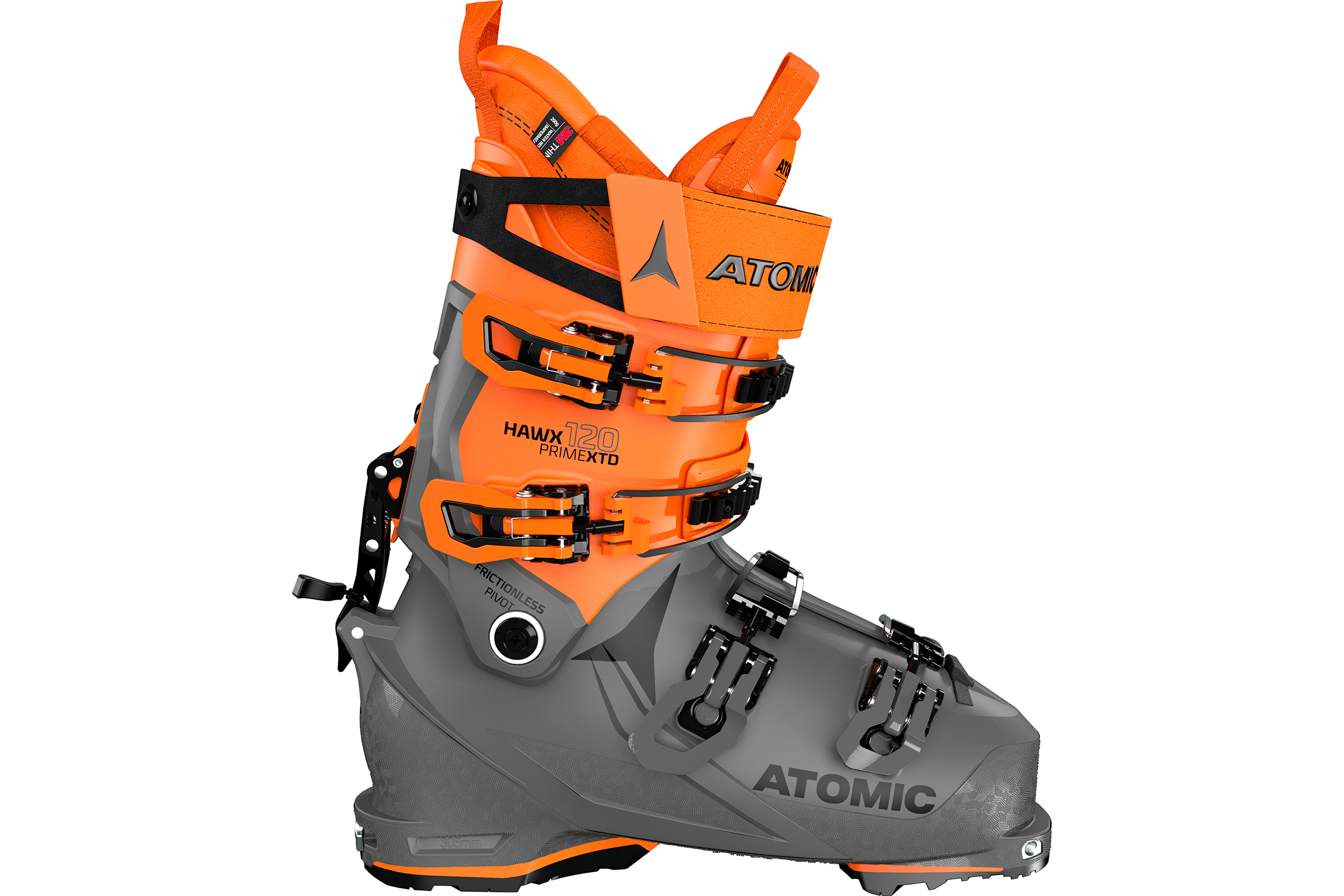 In short: This boot has 54 degrees of cuff flex in walk mode, tech inserts, and buckles that lock open when you’re in tour mode. It’s not the lightest boot on the market. But it’s light enough that I used it as my one boot for all-day tours in the Alps that ended on piste, bell-to-bell skiing at Colorado’s Vail resort, and for exploring a new backcountry zone in Vermont.

The top two buckles lock forward to easy walking when the boot is in tour mode. And you won’t wipe out if you’re still in ski boots for apres. The GripWalk sole has good traction on snow and ice with maximum binding compatibility.

Atomic’s new thermo-moldable Mimic 3D liner is nothing short of awesome. The liner looks comfortable even before you mold it, pre-shaped with an obvious ankle pocket and narrow Achilles.

The brand made the tongue and liner collar from the same plastic as the shell — in other boots, these parts aren’t always moldable. When the liner is heated, the tongue, which for many skiers can cause a pressure point, shapes to your leg. Thinsulate insulation in the toebox makes this one of the warmer liners made.

Also, Atomic’s shell molding system is somewhat different from other brand’s systems. Your local dealer cooks the boot and the liner with Atomic’s footbed inside for 5 minutes.

In my case, my Masterfit footbeds, which are fairly stable, were left in the liner during heating. Once warm, the fitter snugged the liner and shell around my foot and ankle while I stood in a neutral position for 7 minutes. Finally, the boot fitter applied ice packs to the shell to firm up the materials. The process took the same amount of time as a standard liner thermo-molding.

“No other boot is as easily personalizable,” Strassburger claimed. “We give shop employees all the tools to give customers the best fit.” In this boot, that includes a moldable shell and liner that takes 12 minutes total to thermo-fit, adjustable forward lean, adjustable flex, sole canting, cuff alignment, and pad kits.”

After the initial thermo-mold, these boots were gloriously pain-free. I wore them to drive skis ranging from 88 to 117 on piste, on an all-day backcountry tour in Wasatch powder, and in crusty, crunchy, variable snow in the French and Italian Alps.

I’ve hiked thousands of feet in them without a blister or foot pain, which has meant happy and relaxed days. The two top buckles, which lock open for skinning, sometimes slip a notch on the ascent. But they’re easy to readjust. The walk mode lever is glove-friendly. And it’s also super easy to get these boots on and off.

In the shadow of Mont Blanc, when the skiing got gnarly, I knew I had the power to make the turns I needed to. And, I’ve been able to travel with one boot for front-country, side-country, and backcountry.

After my first full day in these boots, I felt some pressure in my right ankle. When I pulled out the liners to dry them at the end of the day, I saw a flap at the heel of the boot had snapped off in the molding, and the ankle plastic folded over when Atomic wedged the liner into the shell. The ankle flap covers a small hole and keeps snow out.

So far, I haven’t noticed its absence. And I was able to fold the ankle plastic back into place after heating it with a hairdryer. We assume Atomic will address these issues in final production, but the brand did not confirm.

Up Next: Filson Lauches Motorcycle Gear With the Alcan Collection