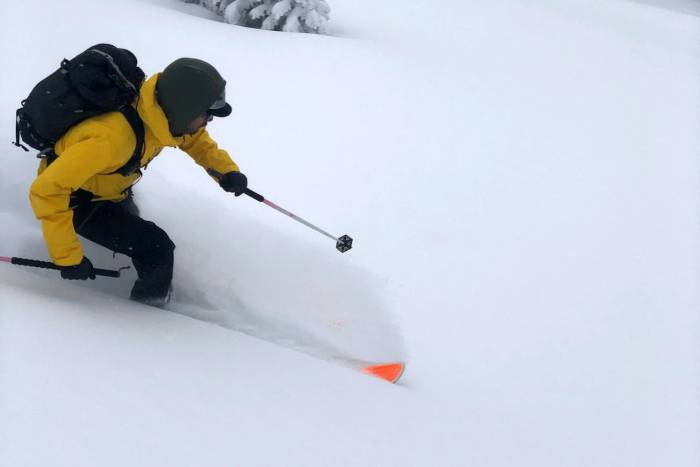 The Kästle TX103 is the brand’s lightweight lineup heavyweight ski — a high-quality backcountry tool for low-quality (and most other) conditions.

“It’s just one more valley over,” I said to my two backcountry partners as they trudged through knee-deep powder behind me, sweat dripping and glasses fogging, as the snow continued to fall. My secret spot would multiply the fun factor after 14 inches of fresh snow falling overnight — if we could just get over there.

After arriving and ripping skins 50 minutes later, we looked down at the run (which I had insisted on) that we were, at this point, committed to. It was wide open and steep, but the wind blasted down to an icy crust. It would be my Kästle TX103’s maiden voyage.

The skis sliced into the run with composure and ease, unphased by the objectively poor conditions. My two friends had a lot less fun in what one described as “survival skiing.” That’s when I knew there was something special about these Kästles.

The TX103 is the biggest ski in Kästle’s TX lightweight touring lineup (which also includes the TX77, TX87, and TX93). Although the line’s widest waist width might put the TX103 in powder ski territory, that would truly undersell its versatility. There’s a lot more to this ski than its dimensions might suggest.

In short: What impressed me the most about this ski was its unflinching poise in rough terrain. It is confidently planted, yet forgiving. It is powerful, yet nimble. The TX103 ($999) is not flashy or particularly playful, but it is a fantastic ski for any snow conditions you will encounter in the backcountry.

Paired with a lightweight binding, this is a ski for backcountry skiers who depend on a one-ski quiver for all conditions. Or a “big ski” in a two or more backcountry ski quiver. There are lighter skis with similar dimensions out there. But Kästle has found a remarkable balance between the weight and downhill ski quality for strong skiers.

I tested the 2022 TX103, which is identical to the 22/23 version aside from an updated topsheet, in a wide variety of early season backcountry conditions in Colorado’s Gore Range and Vail Ski resort to find it all: perfect Colorado powder, shallow December snow full of sharks, steep ice, skied-out backcountry zones, breakable crust, sastrugi, etc.

I paired the skis with a familiar Salomon MTN Pure binding and rode them with both the Scarpa Maestrale RS and the Scarpa F1 boots over 15 days.

At 185 cm and 190 pounds, I found myself smack dab in the middle of the 181cm and the 189cm lengths. I went for the 189cm length to feel it in the “big ski” configuration, despite that being the longest backcountry ski I’ve ever slapped skins on.

This ski can pull off the upsizing for strong skiers. It’s got a short turn radius of 21.3 m for the 189cm length. The tapered tip, early rise, and traditional camber’s inboard contact point have a dramatic impact on how the ski moves.

I wouldn’t say it skis short. But it’s not anywhere close to demanding for something so large and powerful. For beginners, intermediates, or those focused on a one-ski backcountry quiver, consider sizing down for a lighter, more agile ride.

The Kästle TX103 is a no-nonsense ski above all else. For such a big ski, it’s intuitive right away. Provide a little forward pressure and it gives you the reins.

Any wide ski is a lot of fun in perfect powder, and the TX103 is no exception despite it being on the narrower end of the powder ski spectrum. It’s when the snow is less than perfect that the TX103 pulls ahead of its competitors. Push them into crud, crust, or windboard and they slice through with simplicity.

I attribute that, in part, to their notable torsional rigidity. It makes them grounded, smooth, and predictable on edge through rough conditions. Many skis that match the TX103’s prowess in this realm ski long and powerfully at the cost of agility. The short turn radius and shape allow the TX103 to pivot and snap out of a turn far more easily than their power might suggest.

The hook-free tip and tail keep them from snagging and contribute to their lively disposition at any slope angle and snow depth. They can float and drift or drive a firm edge when conditions call for it. Apart from lightweight, that’s what I’m looking for in a backcountry ski.

Even at 103 cm underfoot, the TX103s edge powerfully on steep ice, again due to the torsional rigidity that resembles a much heavier metal-laden ski. On the flip side, they are quick and easy in firm moguls, even in the longest length.

You could get away with this ski as your primary resort ski, but there are better options for that use at a lower price. If you need one ski to carry you from the backcountry to the resort in a 50/50 setup, this ski would fit the bill.

Kästle’s marketing copy alludes to reduced weight in the tips in tails (the point of the colorful cutout in all of their skis). I was actually surprised at how noticeable the weight reduction contributes to the skiability, particularly to jump turns and shorter radius maneuvers where things get tight.

The scale doesn’t lie. This ski isn’t that light for a backcountry-specific tool. At a claimed 1,690 g in the longest length, it’s above average. If you’re skiing on the longer end, you’ll want a boot beefy enough to drive it. Offset that with the lightest binding that you can get away with, a lightweight pair of skins, and you are looking at an unimpressive but highly manageable backcountry weight.

You pay a weight penalty for torsional rigidity and what appears to be impressive durability. And that’s where personal preference will determine if this ski is for you.

My only highly subjective gripe besides the slight weight penalty is sizing. I’d love to see the TX103 in 185 cm. Even at 6’1”, 189 cm feels excessively long for a mid-winter backcountry ski in the lower 48.

The Kästle TX103 is a well-rounded backcountry tool at a manageable weight. It excels in all the snow conditions that you’d expect from a 103cm-waisted ski, but its excellence really lies in its poise in the worst conditions where lighter skis suffer. It’s not a ski for backcountry jibbing, jumping, or freeride creativity. Instead, it’s dependable, grounded, and simply a delight to ski.

The Kästle TX103 is a backcountry ski for strong intermediate to expert skiers who demand downhill excellence, with no compromises in any snow conditions.