British nonagenarian Marie Dorbin is on her way to send your project.

The great-grandmother of 11 recently climbed at the gym for the first time, did four routes, and called it “marvelous.” Dorbin’s send streak took place at the Craggy Island rock gym in Guildford, U.K. The 4’9″ native of old Coulsdon climbed on toprope, wearing a body harness. Her prowess impressed her instructor, Beth MacFarlane, and attracted a crowd.

“I just put my feet and hands on there and was just away,” she said. “I was determined to get to the top, and I couldn’t believe it when I did; I just kept thinking I will wake up soon as it was so exciting.”

Dorbin Trains in the Kitchen, Takes It to the Climbing Gym

Dorbin had displayed her climbing acuity before, but never on the rock (or plastic). She skips the step stool to reach the top shelf, regularly mantling on her cupboards instead. She also enjoys climbing trees and recently painted her house. 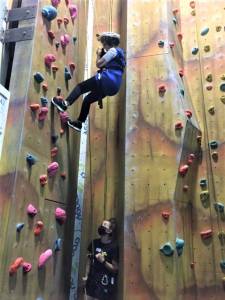 “It came so naturally to me,” she said. “Now I know why I like climbing ladders, up on chairs and on top of the cupboards. I just love to climb; it was just in me waiting to come out.”

Maybe not surprisingly then, her abilities wowed everyone who watched her contend with the wall.

“It is an absolute feat what she did today, going up four times,” MacFarlane said. “I was not expecting the strength and speed from her we got; she did incredibly well.”

Dorbin did so without the benefit of being able to hear her belayer. Near the top of the wall, ambient noise from the gym floor overcame her hearing aid, drowning out MacFarlane’s voice. Unconcerned, the 93-year-old maintained her focus on the moves and kept climbing.

“I think people watching were more scared,” she said. “I wasn’t at all.”

Dorbin’s attitude impressed MacFarlane as much as her climbing did.

“Her face when she came down was a picture,” MacFarlane said. “I told her how brilliant she had done, and she asked if I said that to everyone, but I don’t.”

The Sutton & Croydon Guardian reported the gym outing was a birthday present, though it’s unclear who it came from — by all indications, Dorbin loved it.

Up Next: Ouray Ice Park Overcomes Rockfall, Community Discord to Open for the Season