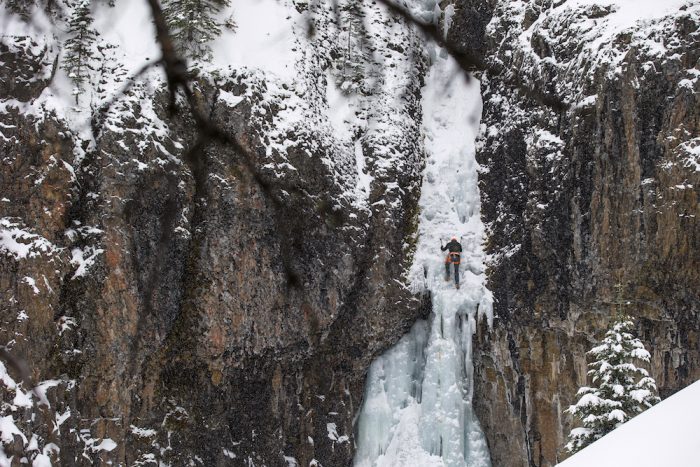 On Conrad Anker’s climbs, the menu can get monotonous. For 19 days, on the 20,700-foot Mount Meru in the Indian Himalaya, Anker, Jimmy Chin, and Renan Ozturk subsisted on oatmeal, energy bars, couscous with salami, and hard cheese every single night.

In Meru, the 2015 film about the climb, the team cracks jokes about the all-couscous menu, but in reality they know from experience that Anker’s planning philosophy is sound.

“Climbing at altitude is so exhausting that the last thing you want to do is to worry about what’s for dinner, or be digging around for that random ingredient,” said Chin. “The fewer decisions you have to make, the better. It’s the same reason Steve Jobs wore a black mock turtleneck and dad-jeans every single day. Eliminate the trivial decisions.” 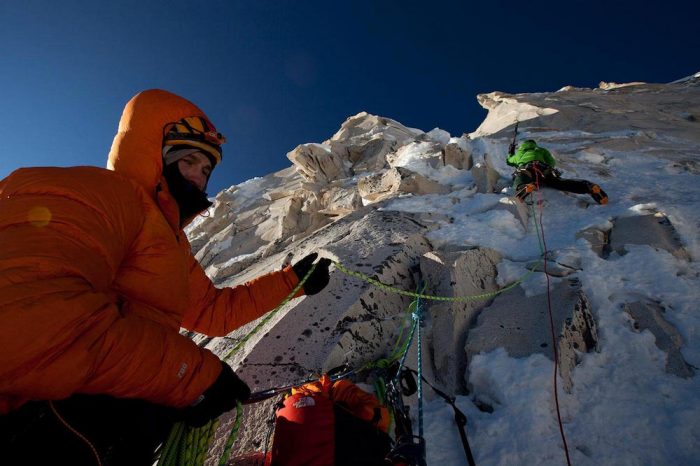 Making many small decisions can compromise your ability to make the big decisions well. It’s called “decision fatigue,” and in mountaineering it can have grave consequences. That the team lost 60 pounds between them on Meru (and failed to summit the route in 2008) had less to do with the Spartan diet than the storm that kept them on the wall for 12 days longer than they planned.

Still, said Anker, their decision to go light and basic was the right plan, one of the hundreds of details that make or break the effort, and one that worked on their successful second expedition in 2011. “Concentrating on the details is what sets you up for success,” he said.

Anker ought to know. He is arguably the most successful mountaineer climbing today, with more than 40 international expeditions on his resume and scores of first ascents to his name. Even at 53 years old, he puts up four or five new routes each year, and in the last year became the face of climbing thanks to his starring role in Chin’s acclaimed Meru documentary. 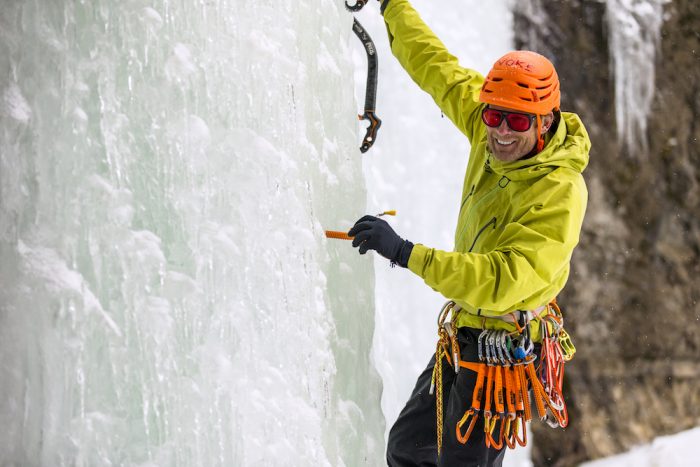 The story details Anker’s three attempts at the climb, and how he persevered in the face of losing two of his best friends and mentors. It cemented his reputation as a survivor, both professionally and personally. Amongst his peers, though, Anker is probably most celebrated as a meticulous preparer.

Nothing symbolizes Anker’s relationship to preparation like his gear room—probably the most celebrated man-cave in all of adventure sports. In October 2015, I met with him there as he began to organize his gear for an expedition to Nepal’s 22,621-foot Lunag-Ri.

I observed his 6-foot-2-inch frame, lean and taut like a big cat, as he pulled a tent off a shelf and tossed it into one of a pair of plastic bins on the floor.

“I’ll fill the bins and then walk around them for two days, adding things and subtracting them,” he said. “Once I’m satisfied, I’ll lay everything out on a tarp and take photos as inventory. Way better than writing a checklist.” 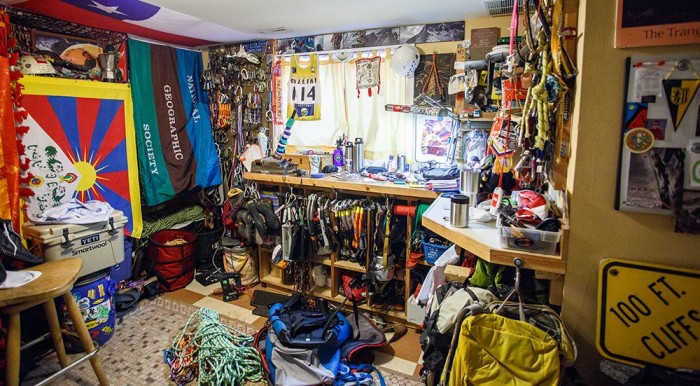 The converted bedroom in the basement of his Bozeman, Mont., home has been the subject of a few short documentaries, and is as much museum as store room. There are racks of carabiners and cams, rows of ice tools, and shelves of tents. Spools of cord are slung below a workbench, and climbing shoes and boots are lined neatly in pairs.

“This stuff is the fuel,” he said. “It’s here to be used. If it’s not in use I find someone to lend it to. It needs to be out making experiences, making memories.”

He gestures at the opposite wall, shelves crammed full of souvenirs from his 30 years of climbing—memories his gear helped create. There is a bottle of water from Gomukh, the primary source of the Ganges, high in the Himalaya. There is a rusted piton he pulled from the North Face of the Piz Badile in the Swiss Alps. A pacifier slung on a pink ribbon, which he brings on expeditions, “to remind people not to act like babies,” he said, grinning.

The gear room’s most poignant shelf is a shrine to his best friend and climbing partner Alex Lowe. In 1999, Anker and Lowe were attempting to ski the 26,335-foot Shishapangma in Tibet when Lowe and cameraman David Bridges were killed in an avalanche that swept over all three of them. Anker ran in a different direction and somehow escaped with only injuries, but was roiled by survivor’s guilt. 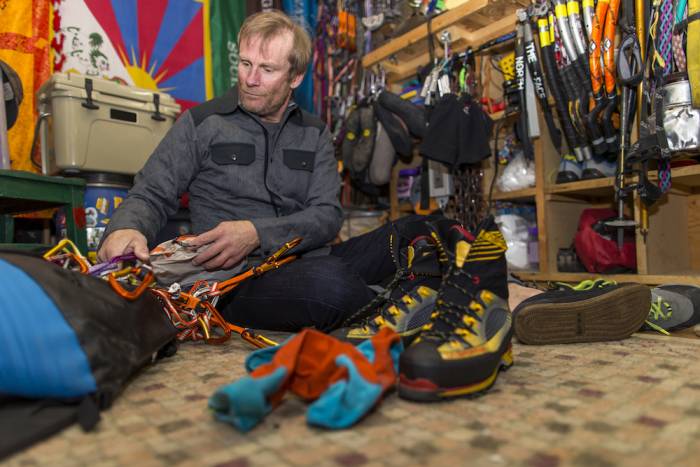 In the months after Lowe’s death, Anker and Lowe’s widow Jenni, in their shared grief, grew close, fell in love, and married in 2001. Anker moved into the Lowe home in Bozeman—the same one where they still live today—and together they raised the three Lowe boys.

In April of this year, the remains of Lowe and Bridge’s were found, 16 years after the accident. For Anker and the Lowe family, the news evoked mixed emotions.

“It brings up the memories of what we went through in 1999,” Anker told NPR in an interview shortly afterward. “And the other end of it is there’s a sense of closure now. It will be a healing thing for our family.”

The shrine contains a dozen items, prayer flags, a signed climbing helmet, a pair of climbing tools, and a ’90s-vintage satellite phone. It’s a constant reminder of the risks Anker faces in his chosen profession, if Jenni and the boys aren’t already reminders enough. At one point Jenni came downstairs to check on a travel detail. 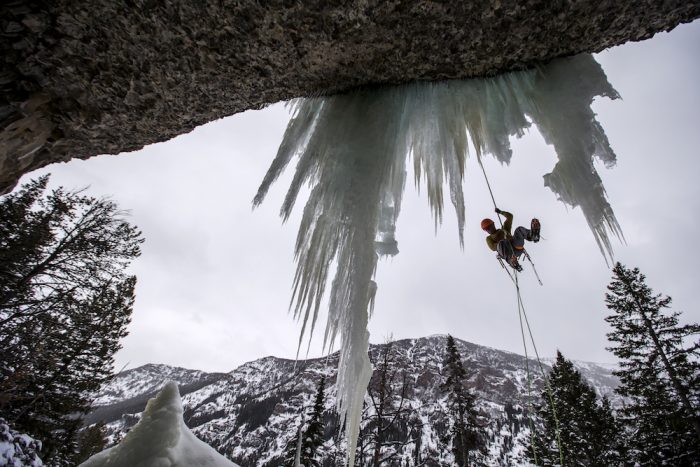 “This is the hardest part for her,” said Anker, once she was gone. “The time before the expeditions.”

Still, this is how he provides for his family, and he treats climbing the same way a doctor treats their practice. “I need to be as professional and organized as possible in order to get the best returns,” he said. “I can’t climb at this level forever.”

Not that his work isn’t compelling. He’s in the inspiration business, after all. “I love climbing. It’s what I’m best at, and taking the risk out of life would be tremendously boring,” he said.

The trick, then, is to manage that risk by managing the details ahead of time. For example, he only climbs clean, solid walls anymore. Not the crumbly, sedimentary rock that’s likely to peel off the wall and land on you. “Life’s too short to drink bad coffee or to climb crumbly sedimentary rock in the Himalaya,” he said.

Anker famously remembers details of every major climb he’s done. He maps the routes, move-by-move, in his collection of notebooks, and even copies out the route maps of climbs he hasn’t yet done in preparation. “It’s a memory trick,” he said.

Anker approaches foot care with the same attention to detail. Every night, Anker carefully cleans his feet with soap and water, and scrubs between each toe. This is a real extravagance when crammed onto a hanging porta-ledge with two other exhausted people. He then rubs them carefully with salve before putting on a fresh pair of dry socks for bed.

Said Chin, “On the first attempt at Meru, Renan’s feet and mine were a mess, but Conrad’s were fine. I learned from that.” 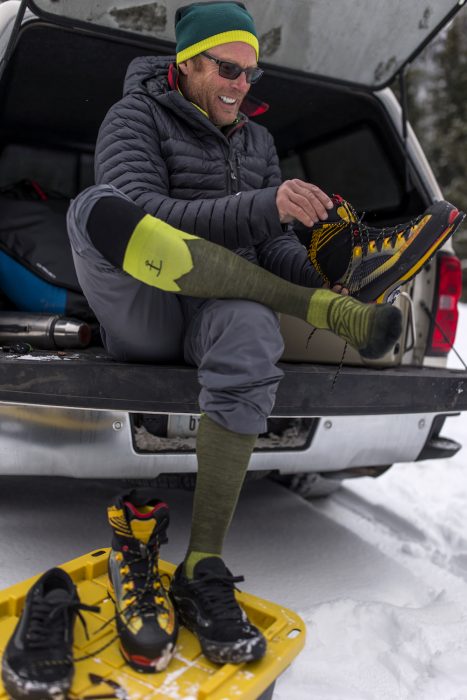 Anker feels the foot routine is emblematic of what has kept him climbing for 40 years. “Having dialed feet is both a psychological benefit and a necessity,” he said. “No detail is too small, and success lies in the details. Having to walk many kilometers in rough terrain simply requires good foot care. Without it, your dreams run the risk of being stopped in their tracks.”

That care is what makes Anker a coveted gear ambassador as well. He has worked with The North Face on gear design for years, and is the visionary behind their heralded Ice Project pack. As a longtime Smartwool ambassador, he recently collaborated on the award-winning PhD Outdoor Mountaineer, a sock designed for the specific needs of alpine climbers.

He and some fellow Smartwool athletes started discussing a new sock design around a fireplace in a small log cabin high in Montana’s Hyalite Canyon after a day of ice climbing in freezing weather.

“We looked at the current state of footwear and what socks were available,” he said. “There were no mountain socks available with graduated calf compression, which aids in preventing leg fatigue, wicks moisture from the toes and arch, and facilitates zonal insulation.” 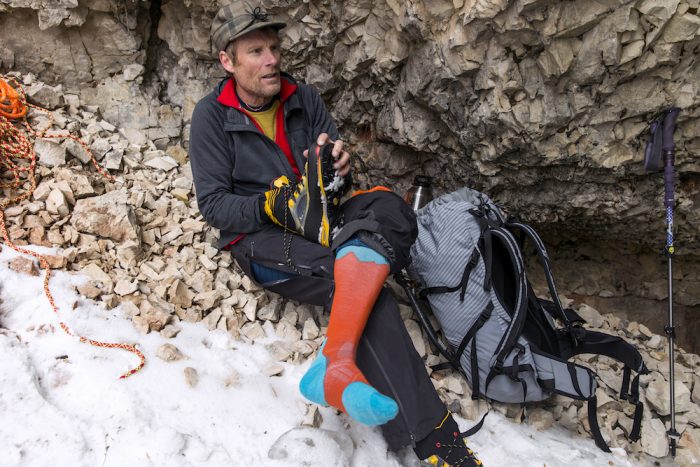 Anker’s relationship with Smartwool led him to collaborate with John Ramsey, development director of the brand’s sock category. “Conrad has given us the best feedback of anyone we’ve ever worked with who wasn’t a professional designer,” Ramsey said. “He knows exactly what he wants.”

Anker took design ideas to Ramsey’s team at Smartwool’s design laboratory in Chattanooga, Tenn. There, they used cutting-edge computerized weaving machinery to build the complex sock with graduated compression, and toe and heel insulation that differ in thickness by degrees of millimeters. 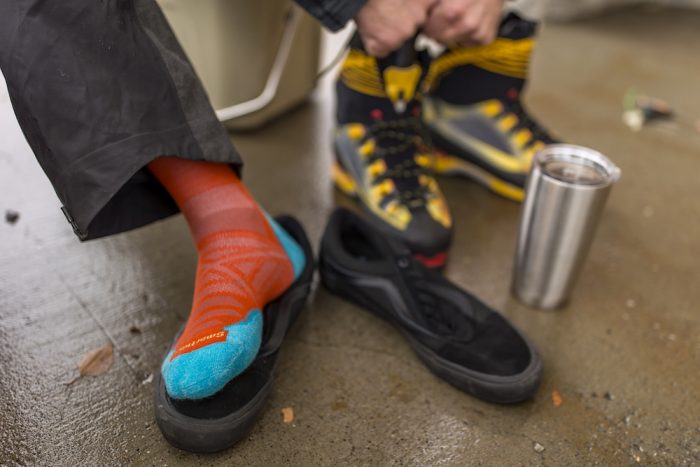 “John’s a third generation sock knitter,” Anker said, “so it was a challenge he enjoyed tackling. He knows the nuances of wool. After six versions we had a product we were really proud of.”

Pillar Of The Climbing Community 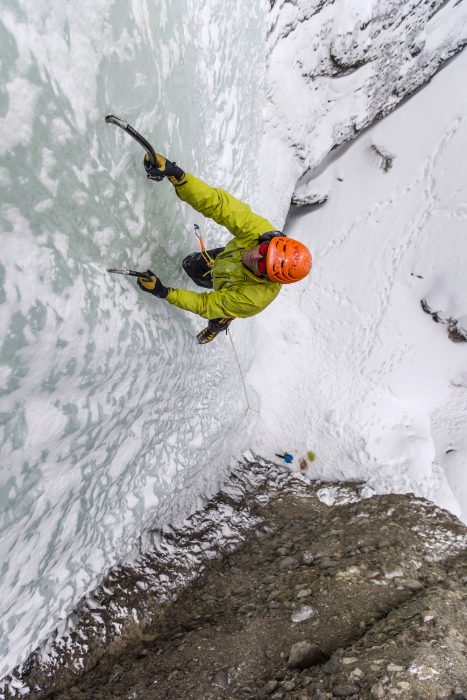 Anker sees his gear design as a sort of service to the climbing community—the fruit of his years of experience. His young climbing parters also benefit from the experience.

Invariably, Anker selects the young hotshots from The North Face team, which he manages, as climbing partners. Chin was one such beneficiary before he became a star in his own right. Alex Honnold, 30, already famous for his free-soloing exploits, is another. Anker plans to get Honnold onto some alpine routes in the coming year to help him round out his climbing experience.

The partnerships are more of a two-way street than it would seem, however. “I’m using the young guys’ energy to stay psyched and to stay relevant,” said Anker, rubbing balm on a new pair of leather gloves. “Hopefully, I can teach them a thing or two about being a professional, and staying alive.”

Even if that means a monotonous diet and meticulous foot care.

– This post was sponsored by Zappos. Check out the new Smartwool PhD Outdoor Mountaineer socks here.

–Frederick Reimers is a freelance writer who grew up at Keewaydin Canoe Camp, a wilderness canoe-tripping youth camp in Temagami, Ontario, where his father was camp director. He was the editor of Canoe and Kayak magazine from 2007 to 2009 and writes for numerous outdoor and action-sports titles, including Outside, Skiing, Powder, and Men’s Journal.

Up Next: Dump To Dresser: Brands Upcycle Gear From Scrap