Sunlight streamed into a studio office. James Q Martin sat at his desk. The room was packed with computers, cameras, and duffel bags full of gear. Martin had just returned from filming in the Grand Canyon, and he looked ready to hit the road at a moment’s notice.

But in the studio, Martin was deep in the editing process of his latest film, which was due to premiere at the 5Point Film Festival in Carbondale, Colorado.

“Q,” as he is often referred to, is an Arizona-based filmmaker, photographer, and conservationist. He has worked on more than a dozen films, many with large names attached to the projects such as REI, Patagonia, and National Geographic.

I sat down to talk with Q about his work, how he got started, and how aspiring artists can succeed in this industry.

Traveling in the Patagonia region of South America has played a large role in Q’s transition to the conservation side of filmmaking. In 2009, he had been all over the world, traveling through five continents, but he began feeling “soul-less” and less interested in “adventure just for the sake of adventure.”

“It was all fun,” he said. “But why? I wanted more meat than that. I was tired of going to places and not really having a purpose.”

When Q learned of five proposed dams on rivers in the Aysén region of Patagonia, he knew he wanted to be a part of the fight to protect Patagonia. The Pascua and the Baker are Chile’s wildest and most voluminous rivers, and these dams would have a massive ecological impact on one of the world’s most pristine and beautiful landscapes.

Over the next five years, he produced films and media to create awareness on the proposed dams.

His first film, Power in the Pristine, was about spreading the message that Patagonia was at risk. “I stumbled my way through that film. I had never studied film and I didn’t really know what I was doing,” he said. “But it was born out of a passion to spread a message. And in the end that message came through.”

Q was set to create a third film on the Patagonia region that would protest the construction of the dams, but due to mounting pressure, Chile cut the dam project. This was a major environmental victory. In light of this news, Q’s third film, Mile for Mile, became a celebration instead of a protest.

Mile for Mile celebrates the victories for Patagonia and highlights the work of Doug and Kris Tompkins, who purchased 2.2 million acres of land and created Conservacion Patagonica to protect a wild landscape of mountains, glaciers, rivers, grasslands, and wildlife, including several endangered species. The preserve is the largest privately purchased land trust in the world, and it is in the process of becoming a National Park.

“Mile for Mile was a watershed moment for me because it blended adventure, athleticism, film, photography, and everything had a cause,” Q said. The film raised more than $90,000 to build trials in the future Patagonia National Park.

Conservacion Patagonica is at the forefront of conservation. “A lot of people have been working a long time to protect Patagonia,” Q said. “I’m just a small droplet in the stream to fight for Patagonia. My goal is to amplify others’ message through film.”

The World Beneath The Rims

Q’s latest work is The World Beneath the Rims, a film with American Rivers about the Grand Canyon. The film raises awareness about development projects that threaten the canyon, its ecosystem, and its aquifers.

Developers are seeking to build thousands of new homes and millions of square feet of commercial space, including a day spa and a dude ranch near the Grand Canyon’s South Rim entrance. 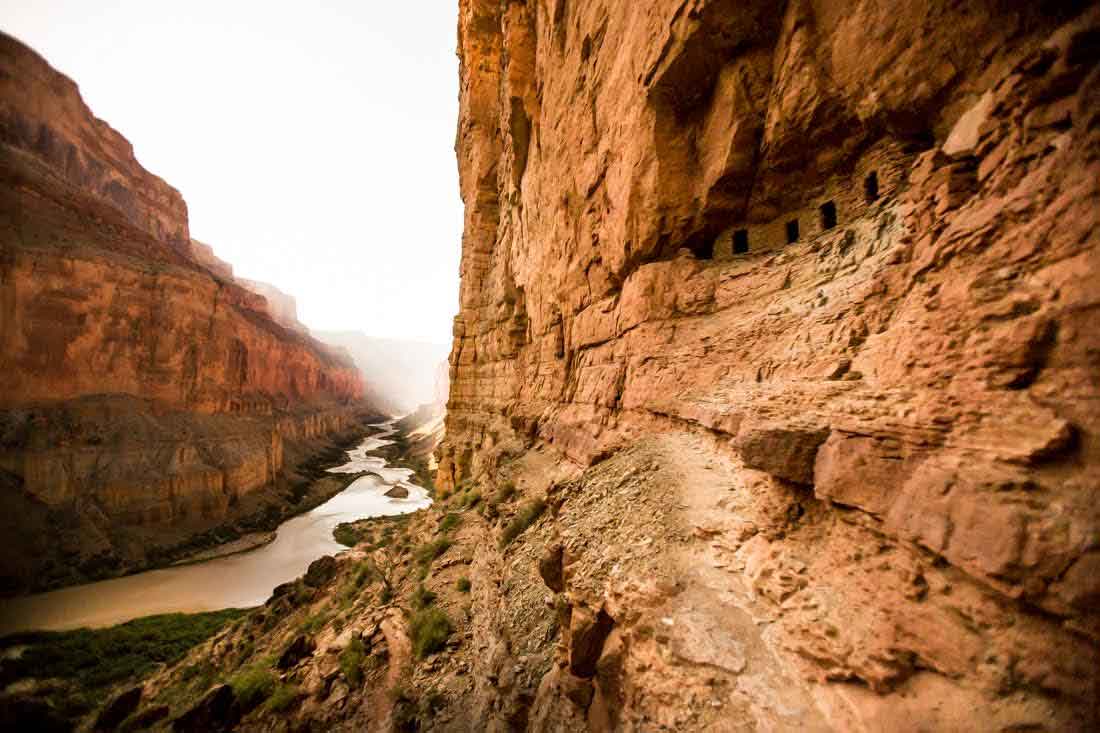 The concern is that the proposed development would potentially be tapping into the groundwater that feeds the many springs and seeps throughout the Canyon. Depleting the groundwater would have devastating effects on the area.

“This film is about the need to keep the aquifers pristine and to keep the fresh ground water in the Grand Canyon,” Q said. “Our goal is to stop the development from happening.”

The Grand Canyon faces significant threats, and not only from this development. Businesses are trying to build gondolas, hotels, and shopping areas at the confluence of the Little Colorado and the Colorado River. Uranium mining operations have already corrupted Horn Creek and Kanab Creek. Future mining would continue to destroy the landscape and contaminate water sources.

“The Grand Canyon faces threats on all four sides. This film is about protecting one of our national treasures.”

The World Beneath the Rims premiered April 24, this past weekend, at the 5Point Adventure Film Festival in Carbondale, Colorado. The film will later be released through the American Rivers organization.

So, how do young artists get into adventure and conservation work? “Find an organization that has a message, then find companies that support that message, and connect the two,” Q offers. “By connecting companies and agencies with a message, you can really open doors.”

“When I began Rios Libres, I had no idea what I was doing. But I felt I had something to make a film. So I went for it, and it worked.”

When asked how to approach companies and organizations, he said “Just be straight up with people, especially when you are talking about money. Oh, and never give your photos away.”

Up Next: ‘Pole To Pole’ Expedition: Renowned Explorer To Circle Entire Globe