Do you love skiing, beer, and party tricks in costumes? Just add fireworks, hula hoops, aquatic creatures, bong rips, and fire, and you have a ski bum’s heaven and one incredible evening of competitive beer-splashing entertainment.

Welcome to the world of Gelande Quaffing, one of the most riveting snow “sports” events invented by beer-adoring, snow addicted “athletes.”

The game of Gelande Quaffing goes as such: one teammate slides a beer down a 10-foot bar top. As the beer flies off the end, the other teammate catches it midair and quaffs: drinks up heartily. Tricks and style are involved.

Held at the base of Jackson Hole Mountain Resort, hundreds of spectators gather to enthusiastically applaud the elite level competition of ski culture gone awry at the Gelande Quaffing World Championships. There, two four-person teams with names like Hostel X, Better Late than Pregnant, and Quaffastafari battle neck to neck.

Sixteen teams will fill the brackets for the 2016 eighth annual Gelande Quaffing World Championships, which kick off today at 4:20 p.m. Traveling from far and wide, the regional competitors will arrive at the motherland from Washington, Montana, Idaho, Oregon, California, and Whistler with skis, bongs, tutus, vibrant onesies, and fireworks strapped to their packs.

But beyond the obvious debauchery, the game requires serious skill. Each round requires a new set of tricks between the catch and chug, thus surging in difficulty—and getting sick is grounds for disqualification. Execution and creativity earn the contestants—a.k.a. quaffers—higher points, and the teams with the most points progress to the next round. In the final round, the team with the highest score at the finish is crowned Gelande Quaff World Champ. 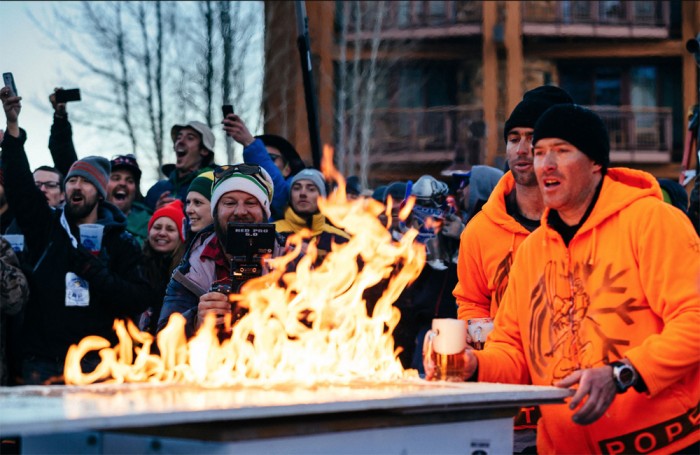 The reigning 2015 World Champion team, Quaffastafari, practiced hard. Their tricks in the final round included juggling canned PBRs, one quaffer hanging upside-down on a pole held by two other teammates, and funneling a beer, quaffing a beer with a goldfish, and in this bizarre sequence: Take a hit from a hops-and-water-filled bong, drink the bong, and exhale the hit, as reported by Stephen Krcmar in The Guardian.

The Gelande Quaff is not for rookies. 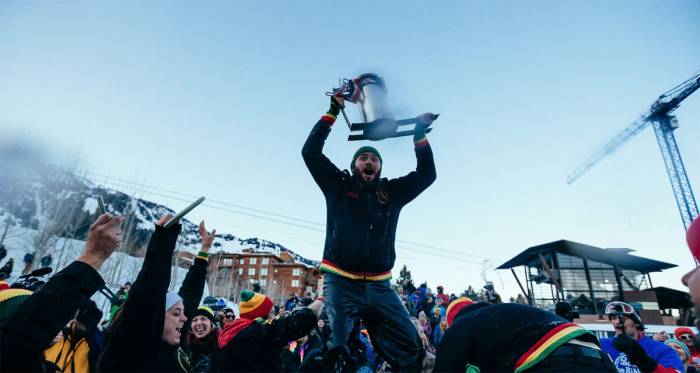 Round One: A steady warm-up with the aforementioned classic move: slide, catch, chug—as many as possible in 60 seconds.

Round Two: Quaffers need to land a clean 360-degree jump before they catch and chug—as many as possible in 60 seconds.

Round Three: Contestants are required to complete a 360-leap or an under-the-leg catch, of their choice—as many as possible in 60 seconds.

Finals: The acrobatic-beer-guzzlers must first perform three catch variations: the handle catch (self-explanatory), the 360-jump catch, and an under-the-leg catch. Once complete, they can perform freestyle: any trick of choice—120 seconds total.

Who Came Up With This Crazy Idea?

The folklore goes, a die-hard crew of big-mountain skiers—dubbed the Jackson Hole Air Force—was waiting in the Bear Claw Café for the mountain to open following a three-day, two-foot storm in the late 1980s. The bartender slid a crisply filled beer mug down the bar top, the glass took air off the end and was caught before it shattered, then heroically consumed.

“When Pepi Steigler used to jump, they’d say, “gelandespring.” So we said ‘gelande quaffing.’ Quaffing is when you slam your beer,” Howard Henderson explained in the film, Swift. Silent. Deep., a documentary that explores the rise of the extreme skiing movement and the Jackson Hole Air Force — as published by Powder Magazine.

Such was born Gelande Quaffing, which became an après-ski competition that fizzled out but returned full-force in 2008, with the annual Championships hosted by the Village Café. 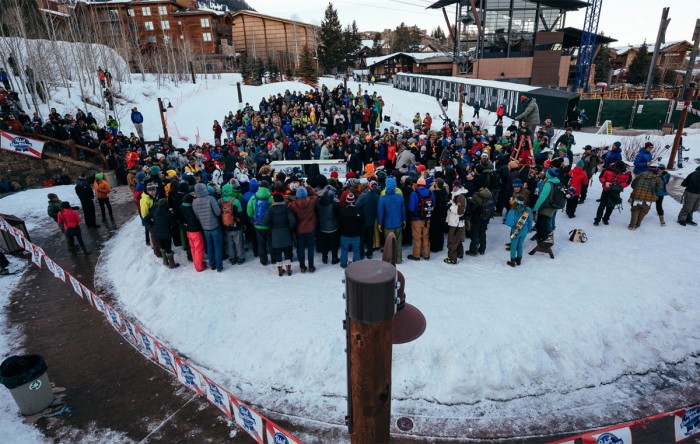 “[Gelande Quaff] is upholding the ski bum tradition of why we are here in the first place. We are here to ski and have fun and live life to the fullest. Gelande Quaff embraces all of those things,” said Trish Ireland, event organizer, and Village Café manager—plus, “it’s a trip to watch and it’s pretty funny,” she added.

Train hard and be on the lookout for February’s sub-regional qualifiers—a.k.a. quaffifiers—for the 2017 Ninth Annual Gelande Quaffing World Championships next March. Visit the Gelande Quaffing Facebook page and the Village Café for more details.

Saving…
Ski Helmet Is Walkie-Talkie For Your Head
Woman To Race 2,745 Miles After Beating Deadly Illness
×