This incredible structure is built from 21,000 feet of cord suspended 400 feet above the Utah desert. What a place for an afternoon stroll. 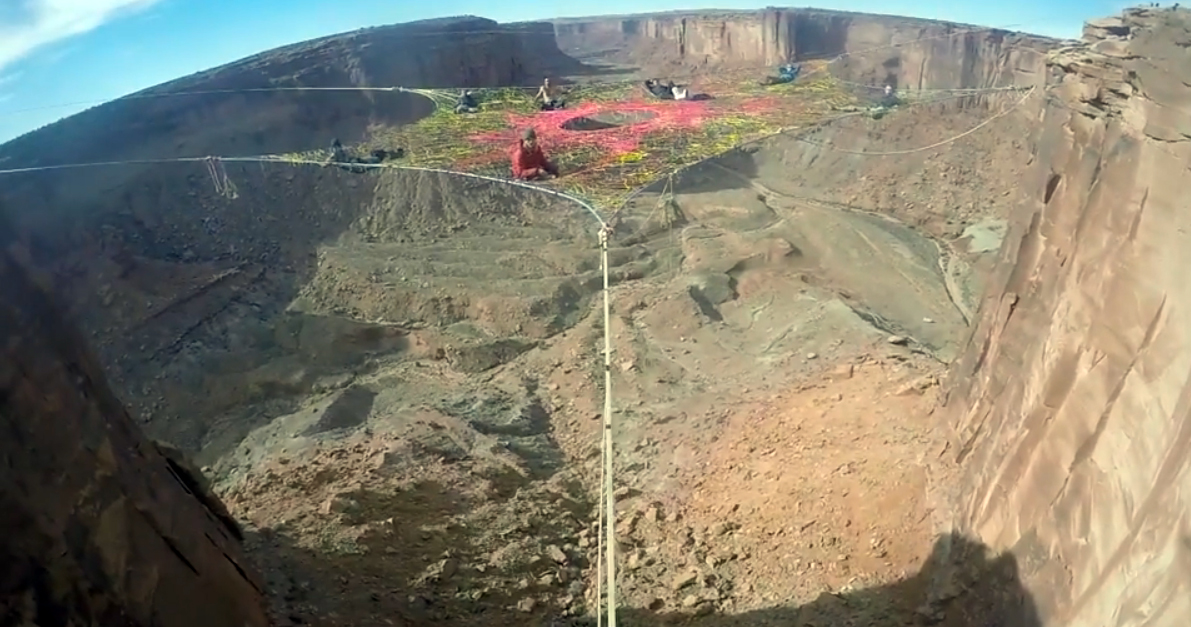 Led by “Sketchy” Andy Lewis, the team calling themselves the Slacklife Monkeys has built an incredible “double nest” slackline structure high above the Utah desert. The video above shows Lewis walking a line then B.A.S.E. jumping to the desert below. Wow, what a way to spend Thanksgiving!

As reported by Lewis:

THANK YOU SLACKLIFE MONKEYS FOR THIS DREAM!

This stunt was a massive community effort! Some things can be done on your own, in your own personal world, for your own personal reasons… and this was not that stunt. This was a mega project, with mega work, for many hands, on too much gear! Years of dedication, creation, testing, evolving, and updating have led to Thug Mansion; “a sky high iced out paradise, in the sky,” that is 400ft high, has 7 highline-able walkable sides, and 2 Space Nets connected by a “float line,” (which is a highline with 2 dynamic anchors).

When I drew up the plans I laughed as I tried to imagine the amount of monkeys we would need to rig this multi-hundred pound structure, hundreds of feet off the desert floor. We put the word out and started to prepare all the gear. We took out the nets and pre-rigged them– setting them up 3ft off the ground. We added more weaving to the nets– putting the amount of cord weaved inside of the nets at about 21,000 ft + We measured and taped all the lines, organized dynamometers to track the forces in the system, found hardware for the potential users of the net, and racked everything into cars. 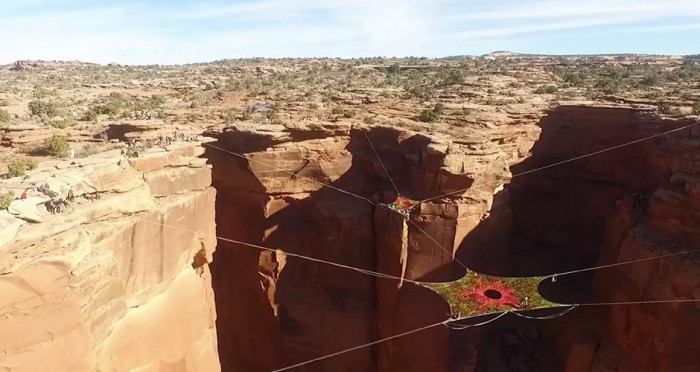 Over the next few days I mentally prepared for the rig, and crossed my fingers we would have enough people. On the day of the rig I pulled up to the parking lot full of cars, dumped all the gear, and by the time my car was empty, everything was already being carried to the location. Beautiful. Over the course of the whole day almost 100 people worked together to get Thug Mansion rigged. By sunset we were chilling in the sky, taking the first walks of all the lines, and planned on making it even better.

We added back ups, a little tension here and there, and even walked the float line in the middle! We came back to the net day 2 and celebrated the 2 year anniversary of our fallen monkey Daniel Moore RIP 11-23-13. We cheered for him as we enjoyed the first jumps from the new space station, his ashes under a tree watching over us. The whole structure was perfect and jumping from it was amazing. That night I tried to sleep, but couldn’t stop thinking of the BASEline. The moment I would be sitting on it. The terror of standing up, or rather falling off out of control. I shivered, and wrestled my sheets all night. This morning I couldn’t help myself, I had to go do it. And this is the RAW video from my GoPro4 Black, 1440×80 W of the first ever Net to Net BASE line ;D