An Austin, Texas, photographer had her home literally swiped away by thieves just weeks before she was to move in. And now she’s found it. 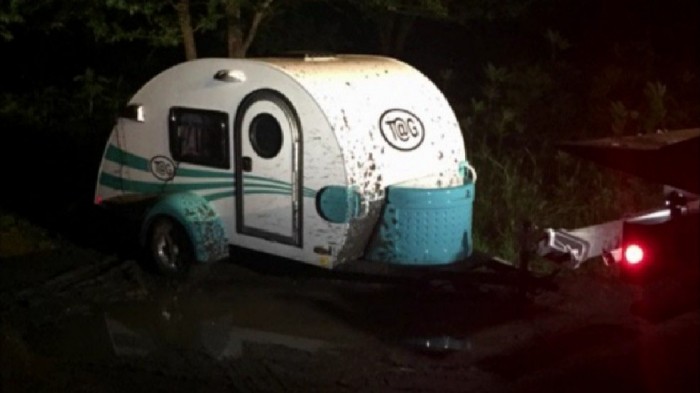 Photographer Mandy Lea travels the U.S. aboard a Little Guy Teardrop Trailer T@G while working. Her work is beautiful, check it out.

And as of June 1, she had plans to move into the trailer full time.

“As many of you know, my teardrop is more than just a get away to me, it is my home,” she said in a Facebook post that has been shared more than 78,000 times. “As of June 1st I was to be living out of it full time. As happens with the world, I’ve been punched in the gut. I went out to get something this morning and it is gone. Simply vanished.”

But on Thursday, the trailer was found by police looking for a fugitive inside an encampment, according to KEYETV Austin.

“Members of the Lone Star Fugitive Task Force were conducting an active investigation on a fugitive that’s been frequenting the east side of Austin,” Deputy U.S. Marshal Brandon Filla said.

The investigation led police into a wooded area in east Travis County, where they found a makeshift camp and Lea’s trailer, which she had dubbed “Bird Song.”

“My heart broke again at seeing her condition,” she reported.

Lea won’t share more details until after police complete their investigation, she notes. But for now, at least her trailer has been found.

“I am so grateful to have had all of your support and continued love through this,” she said. “I hope that my gratitude can be shown through my images from my upcoming journey, and that you will all continue to follow in my adventures.”

Up Next: Motorbike Across India With A Total Stranger

Saving…
Motorbike Across India With A Total Stranger
Life On The Road: We Visit ‘Van Life Rally’ In CO
×