It’s nearly 100 years old, it has antlers for handlebars, and it’s one of the baddest winter bike builds I’ve ever seen.

Some things don’t need to make sense, they just look cool. So it is with the all-steel, vintage bicycle dubbed “Ydintuho.”

I don’t have the slightest idea how to pronounce that. But Pekka Tahkola, vice president of the global Winter Cycling Federation, tells me it means “nuclear destruction.” (Coincidentally, it’s also the name of a Finnish death metal band, because I’m a sucker for a melody.)

Tahkola, a native of Oulu, Finland, has spent the last year resurrecting the frame and modifying it into what he calls his Mad Max bike. So far, he appears to be on track.

9 Winter Biking Pitfalls (How To Overcome Them)

It's too cold. It's too expensive. I need a fat bike. NO! This is what cyclists in the U.S. (and city managers) can learn from the hardy folks in Finland to keep biking all winter long. Read more…

Where does one come upon a bike fit for the apocalypse? Why, the landfill of course. That’s where a curious, sharp-eyed antiquer friend of Tahkola’s found the frame more than 20 years ago.

According to Tahkola – who rides, builds, and fixes more bikes in a year than many of us see in a lifetime – the bike dates back between World Wars I and II. Unfortunately, the ravages of time (and a massive scrap heap) wore away any identifying markings. Presently, Tahkola is seeking vintage bike experts for more exact info on the bike’s age and origin.

Tahkola’s friend initially tried building up the frame to again be ridable, but never finished the task. So by the time Tahkola set hands on it, he had a vintage single-speed frame with an unheard-of 56-21 gearing, mammoth 3/16-inch chain, a saddle built like a twin mattress, and Fauber (classic) crankset.

But the bars, he knew, needed work.

“The handlebar was probably crashed, bended, then re-straightened, and all rusted,” he told me. “So it was a real time bomb.”

And while most of us would immediately think of Craigslist or the local bike shop, Tahkola told me the most Scandinavian thing I’ve ever heard:

“I just contacted a couple of friends [asking] if they would have any spare antlers.” 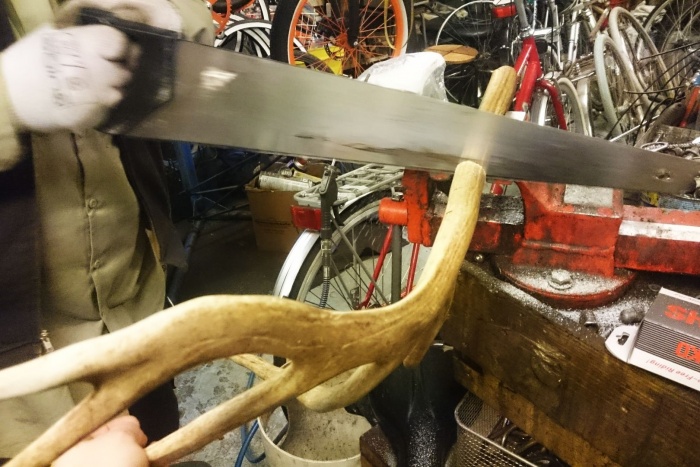 And of course, one of them did – because Finland. And before PETA goes after him with pitchforks, note that reindeer lose antlers naturally each year. Accordingly, Tahkola assured me no reindeer were harmed in the making of Nuclear Destruction. Moving on.

At a municipal DIY workshop, Tahkola sanded and shaped the antlers to fit. Initially, they were mounted tines-up. While it looked cool, it presented an unfortunate goring hazard. So Tahkola rotated them to dropper-style.

The result is a truly one-of-a-kind ride, one that I wager will be perfect for marauding wastelands after the End Times.

Also check out our coverage of the annual Winter Cycling Congress. Plus, visit the WCF website for resources on winter cycling events, initiatives, and to register to attend an upcoming event.

Up Next: ‘Bomb Cyclone’ Is Sharknado of Snowstorms