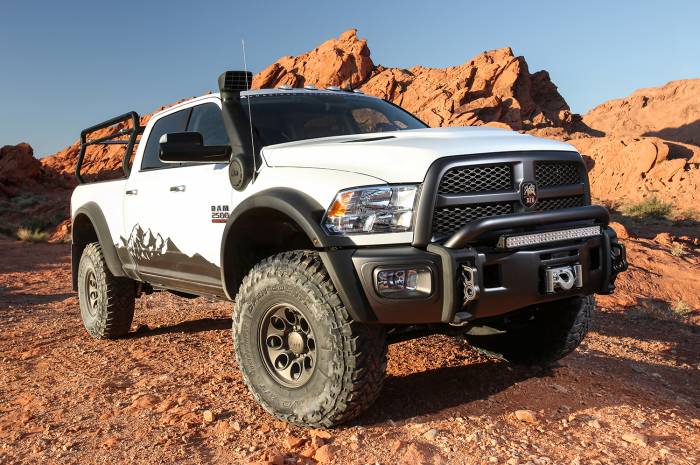 With upgrades to the suspension, tires, bumpers, and bed, the brand still touts a factory-quality ride.

To get the modified truck, you first need to own a base Dodge Ram 2500. From there, AEV will go to work. The total build adds about $31,000 to the base price Ram, and only 20 will be produced. AEV does the conversion for you.

AEV specializes in engineering and manufacturing Jeep Wrangler and Ram 2500/3500 accessories, like snorkels, bumpers, and suspension.

The goal of this build was to increase the RAM’s adventure capabilities, like towing campers and hauling heavier loads, without sacrificing ride quality.

The company validates its products in an annual overlanding trip to test various real-world scenarios.

To fit 40-inch tires on the truck, AEV upgraded the suspension and wheel well. The suspension utilizes AEV’s DualSport Ram 3-inch suspension. Made for everyday use, the suspension lifts the vehicle up and maintains ride quality, handling, and payload.

Adventuremobile: Should You Get A Winch?

It's costly, heavy, and potentially dangerous, but a good winch can make your off-road vehicle nearly invincible. So, is a winch right for you? Read more…

In spite of the bumper strength upgrades, the construction maintains the original airflow characteristics of the factory bumper. And a 23-gauge stamped-steel AEV Heat-Reduction Hood with two vents reduces under-hood temperature.

Air intake: The truck comes with a raised air intake or snorkel. Made from light and strong polyethylene, it provides clean air for combustion.

Bed rack: For securing your gear, AEV claims an “infinite” amount of options with its proprietary bed rack.

Paint job: A custom paint job completes the build, with mountains along the side and AEV branding.

Together, these components comprise one burly overland beast. If the complete build isn’t for you, most of the AEV components are available on its website.

The Prospector XL 20th Anniversary Edition is assembled in Wixom, Mich., and a majority of AEV parts are manufactured near Detroit. To secure one of the 20 iterations of this special edition, call the AEV sales team .

Up Next: Meet The Brand Turning Old Land Rovers Into Masterpieces