It’s 39 degrees in December, a sad rain that should be snow blowing sideways in hard wind. I’m sweating, running uphill on a wooded trail by a river in Minnesota, working to max out the performance claims on a jacket The North Face says is its most breathable to date.

The shell, officially the HyperAir GTX Jacket, is an early-release. It comes to market for $249 today (December 15, 2015) as the first commercial garment using a new kind of material made by the grandfather of waterproof-breathable science.

Gore-Tex Active is an upgraded material in a long line of membranes from W.L. Gore & Associates. This one is different in its “permanent water beading surface,” a feature advertised as eliminating the need for a face fabric.

It also eliminates the need for a chemical “durable water repellent” (DWR) coating to make water bead on the surface.

Instead, the Gore material puts its membrane on the outside, trading a fabric layer for lighter weight but compromising some durability, as I would soon discover on my test run.

To understand this jacket, you need to compare it with full blown Gore-Tex shell jackets. The HyperAir GTX accomplishes much the same function as those ubiquitous shells, but with much less weight, less material, no DWR coating to wear out, and a little less durability. 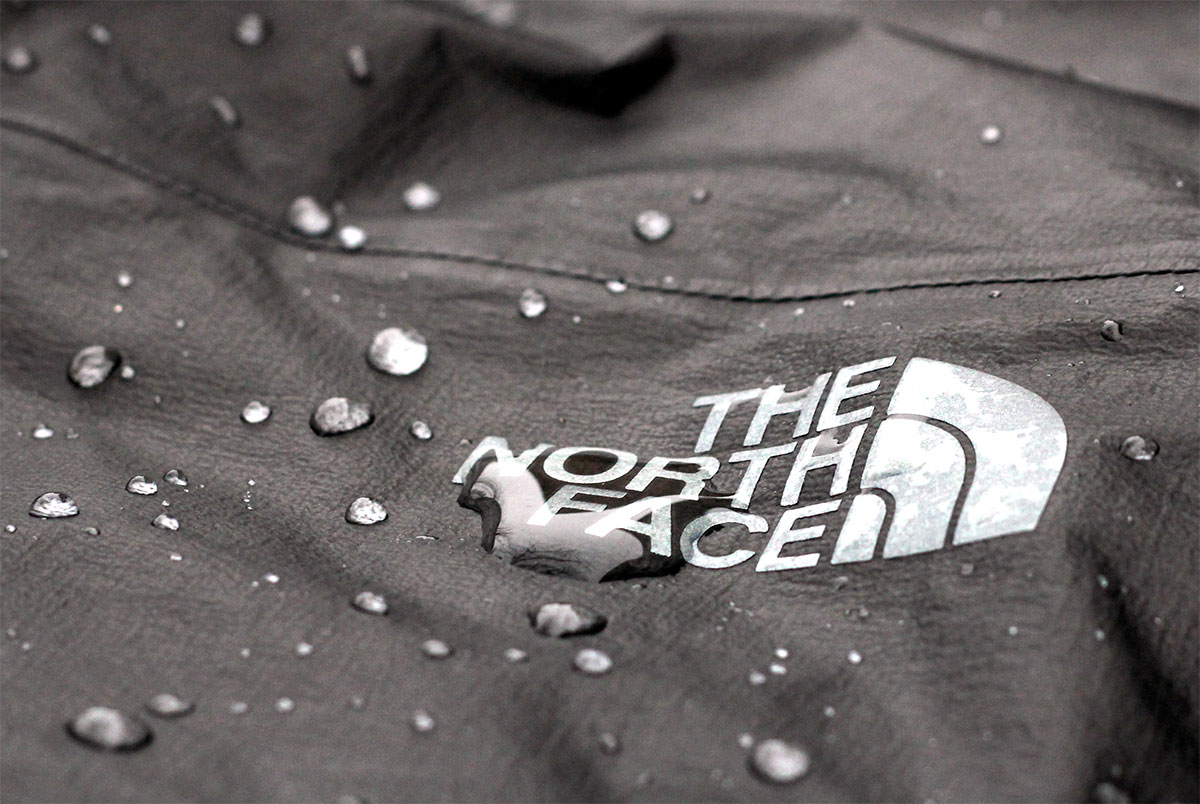 In the article last week “Can ‘Permanent Beading’ Revolutionize Outerwear?” I explain how waterproof-breathable jackets for decades have relied on Gore’s membrane, which is made of a compound called polytetrafluoroethylene, abbreviated to ptfe or e-ptfe. It lets vapor out, but it is waterproof from the exterior, granting breathability.

But the traditional jacket required layers of fabric, and the DWR could wear off, allowing a jacket to “wet out,” with water soaking the top layer. This leads to a less effective jacket that compromises protection from the elements and can make you cold.

The new Gore Active, and thus The North Face HyperAir GTX Jacket, with its touted “permanent beading surface,” was made to eliminate the “wetting out” occurrence.

I was excited to put it through some paces. As a longtime jacket junkie, the search for the perfect waterproof-breathable is unending.

The North Face was also excited, bringing the jacket to market in a shortened timeline after the new material from Gore became available. I talked to one of the company’s product managers, Becky Childs, and Jeff Dorton, who directs materials commercialization for The North Face.

“Everything about this project was out of the ordinary,” Childs said. “A product cycle for development is often 18 months, but with this piece it was just over 12 weeks.”

The company was intrigued by the lack of DWR and the jacket’s enhanced breathability, which it touts as better than anything in its line.

“There is no layer to block moisture movement on the outside of the jacket,” Dorton explained. He said TNF does not cite lab specs around breathability but that the jacket exceeds anything he’s seen.

Noted Childs, “We had pit vents and laser-cut ventilation in the original design, but that was removed to make for a more streamlined shell.” The extra features were seen as superfluous once the company testers, including two ultra-runners on an expedition, returned with feedback.

This fall, as the final touches were put on the design, the company built its marketing assets to position the HyperAir GTX Jacket as a running and training piece. It is not something made for bushwhacking and backpacking where branches or straps might abrade the fabric.

In the hand, the Gore Active material is thin and rubbery. It has some stretch. I hiked hard and was very comfortable; the breathability claims rung true, as the jacket is among the more comfortable hard-shells I have worn.

Running, on the other hand, overwhelmed the jacket. By the end of an hour-long trail run I was soaked with sweat. My base-layer top under the jacket could be wrung out.

No waterproof jacket I have ever worn can keep up with a body producing sweat. The HyperAir GTX Jacket was comfortable and noticeably more breathable than past models, but still not a panacea.

Waterproof it was. Rain beaded on the surface. The Gore fabric has no trouble blocking water as well as wind, and I was impressed with the droplets collecting briefly then sliding off to reveal a dry, hydrophobic surface again.

In a size large, the jacket fit my 6’1” frame about right. However, this is a somewhat baggy design, not as athletic as I’d assumed. It has a waterproof main zipper, two zip pockets, one internal mesh stash area, and a nice hood with a semi-hard brim and one adjustment on the back.

Durability is compromised by the TNF jacket’s airy makeup. In the woods, branches caught but mostly created no damage as the fabric is smooth. I escaped some bushwhacking with only a few small snags on the jacket face.

However, in a standard abrasion test I perform against a stone edge, the TNF jacket’s thin face disintegrated and wore away. Once torn, the fibers were prone to tearing, as the thin material has no substantial rip-stop grid.

The Columbia OutDry Extreme jacket, when subjected to the same test, showed almost no sign of wear. Its fabric is much thicker, though heavier and not marketed to runners.

In the end, the common trail runner should have few issues with durability. I put it to a stress test mainly as a comparison to the Columbia product. However, don’t plan to take the HyperAir GTX Jacket into the woods if you’re looking for longevity.

Instead, pack this uber-light shell for the days when rain might come but you want a jacket in your pack. Or wear it to train; the waterproof-breathable formula here is more comfortable than most anything with comparable waterproof characteristics available.

Its price tag, at $249, is middle of the road. For a new type of fabric and a solid design I call it a fair deal.

In a press release, The North Face notes the HyperAir GTX Jacket was “designed for bone-dry protection while running or training outdoors in the wettest weather” and that its material is “revolutionary.”

There is some hype, for sure, with the HyperAir. But the new fabric, which beads like glass and likely breaths better than anything in your closet, deserves some buzz, as well as a serious look by anyone active in the outdoors as something unique and new.

Up Next: ‘Windshirt’ Jacket A Secret Weapon For Warmth