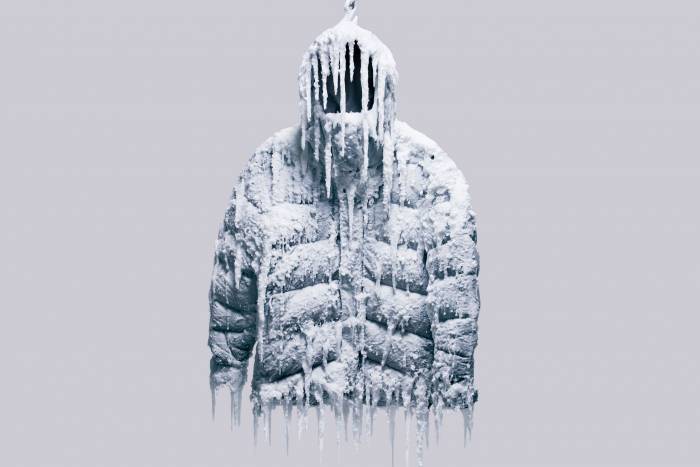 Hack it with a knife, scrape it with rocks, and poke it with gnarled branches. And then, take this puffy to the coldest spot on Earth. Vollebak promises the Indestructible Puffer won’t just outlast other insulated jackets, it will get tougher the worse winters get.

If there’s one knock against puffy jackets, it’s that their lightweight warmth also carries a “handle with care” stigma. That was the starting point for Vollebak’s latest bombastic innovation, the Indestructible Puffer.

Steve and Nick Tidball, the twin-brother founders behind the London-based extreme apparel brand, today unveiled a synthetic puffy enveloped in a Dyneema shell. And while Dyneema is a well-known wonder material within the outdoor space, the Indestructible Puffer still boasts some impressive (“lofty”?) claims.

As you can see, it appears to withstand slashing from a blade — remarkable on its own. But the brand doesn’t stop there.

“[E]ven if you were wearing a steel-plated jacket that was the same weight, the Indestructible Puffer would be 15 times stronger,” the brand’s description reads.

“The material is so tough it was originally used in body armor, anti-ballistic vehicle armour, mooring systems for giant container ships, and ropes used to tie down oil rigs in violent, icy seas. In early tests the mooring lines were so strong they broke the machines that were meant to be testing them, and the body armour stopped bullets from a Kalashnikov.”

Let’s take a moment here to say that, with absolute certainty, this jacket will not stop bullets. And it won’t moor a container ship. But the Dyneema that constitutes its outer shell, according to co-founder Steve Tidball, will repel the “shearing, tearing, and blunt-force traumas that you’ll get in the real world from rocks, trees, and falls.”

“We wanted to create a jacket that could withstand the toughest challenges in the toughest places on Earth,” Tidball said. “It will withstand any abuse you put it through during your lifetime and be in good enough condition to pass down to your grandkids when you’re done with it.”

A puffy you can gift your grandkid? We’ll file that under TBD. But this jacket’s purported strength and durability aren’t its only selling points. Vollebak rates this jacket down to -40 degrees — which, funny enough, is the same in both Celsius and Fahrenheit.

And it accomplishes that with 600-plus-fill-power synthetic insulation made entirely from recycled plastic bottles. And, should you choose to test just how low you can go in this jacket, the brand also claims it will only get tougher the colder it gets (another nifty fact about Dyneema).

Though it hasn’t tested it that far, Vollebak believes the jacket’s shell would continue to get stronger all the way down to -150 degrees Celsius (an astonishing -238 degrees Fahrenheit).

Once again, do not take this jacket into environments that reach -238 degrees Fahrenheit. Like all things Vollebak, what this jacket could do and what it should do aren’t necessarily the same.

Don’t forget to double-check that price tag — this is a thousand-dollar puffy. It may seem like a lot (well, it is!), but if you’ve ever torn and replaced one or two, you’re creeping up on that amount anyway.

So if you’re looking for a puffy you can be a little reckless with (and maybe give to your grandchild), check out the Indestructible Puffer, available now.