Bass Pro Shops announced today that it will purchase Cabela’s for $5.5 billion, or $65.50 per share. 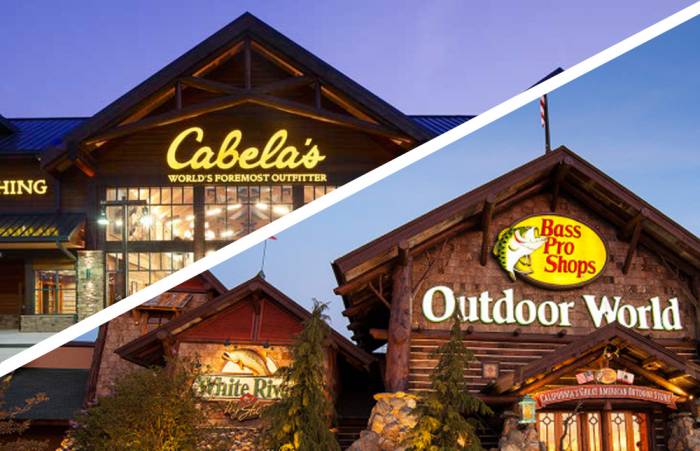 The acquisition creates a near monopoly in the hunting and fishing category. The combined annual revenues of both companies are more than $8 billion.

The companies announced the acquisition in a joint press release today. Both brands will continue to operate as unique entities after the merger.

“A driving force behind this agreement is the highly complementary business philosophies, product offerings, expertise and geographic footprints of the two businesses,” the brands said in the release. “The essence of both Bass Pro Shops and Cabela’s is a deep passion to serve outdoor enthusiasts and support conservation. The combination brings together three of the nation’s premier sporting brands: Cabela’s, a leader in hunting; Bass Pro Shops, a leader in fishing; and White River Marine Group, a worldwide leader in boating, which is part of Bass Pro Shops.”

Before this merger, Cabela’s and Bass Pro Shops were among the largest retailers of outdoors products in the United States. With revenues of $4.2 billion in 2015, Bass Pro Shops sat at No. 98 among America’s Largest Private Companies.

Cabela’s did $4 billion in sales in 2015. The conglomerate will now vastly overshadow all other outdoors retailers on the continent.

For comparison, REI did about $2.2 billion in sales in 2015, only one quarter the business of the combined Big Two.

“We look forward to continuing to celebrate and grow the Cabela’s brand alongside Bass Pro Shops and White River as one unified outdoor family,” said Johnny Morris, founder and CEO of Bass Pro Shops.

Founded in 1961 by Dick Cabela, Cabela’s has about 80 stores in 36 U.S. states and nine in Canada. Its catalog and online business contribute to about 24 percent of its sales.

But like other brick-and-mortar businesses, the company struggled in recent years. According to a Forbes project in February 2015, Cabela’s was ranked as number one “Most Troubled Retail Store” in the country behind doomed Radio Shack.

Other retailers dabbling in the outdoors space have also shown vulnerability, Sports Authority declared bankruptcy and closed all of its stores earlier this year. GearJunkie reported Eastern Mountain Sports was headed for bankruptcy, and it filed for Chapter 11 protection in April.

A merger of the two brands could lead to more efficient business practices and better sustainability as online sales continue to whittle away at the brick-and-mortar model.

A Mega-Outdoors Conglomerate Is Born

What does this mean for consumers and makers of outdoor gear?

Both brands are already well established, with Bass Pro dominating sales across the South through its 99 stores and 20,000 employees. The Nebraska-based retailer has remained bullish in tough times, opening seven stores in 2014. Cabela’s announced three new stores in 2014.

For consumers, we expect little change, at least for the short term. These brands are too ingrained in the public conscious to be scrapped, and each has loyal followers.

Loyalty programs and credit cards associated with the brands will continue to be honored. According to the release, Bass Pro Shops will begin a multi-year partnership with Capital One Financial Corporation under which Capital One will originate and service the Cabela’s CLUB, Cabela’s co-branded credit card, and Bass Pro Shops will maintain a seamless integration between the credit card program and the combined companies’ retail operations and deep customer relationships.

All Cabela’s CLUB points and Bass Pro Shops Outdoor Rewards points will be unaffected by the transactions and customers can continue to use their credit cards as they were prior to the transaction.

Our biggest concern is that smaller shops will face even stiffer competition when meeting the buying power of this massive conglomerate.

Cabela’s buying power will likely be significant for independent gear brands that rely on large yearly buy-ins. A single buyer could make or break a year for many outdoors brands, particularly with few alternative markets for many hunt and fish products.

The acquisition is underway, and expected to close in the first half of 2017. For the outdoors world, it’s not one to take lightly. Chances are, your future hunt and fish purchases will come from one of these two enormous chains, which are about to become one.