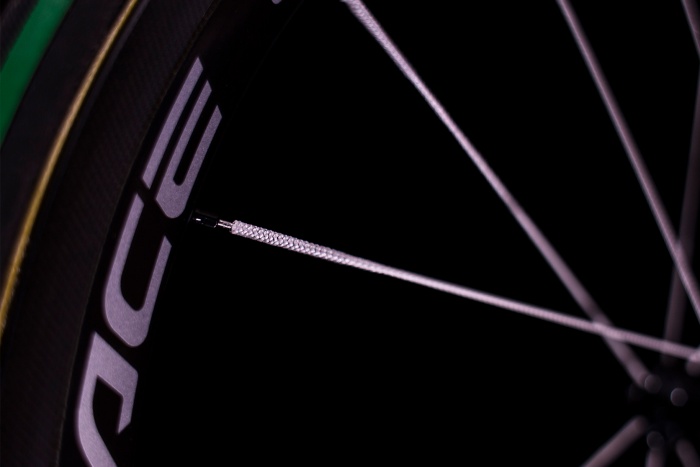 The latest upgrade in cycling tech will happen in one of the last places you’d expect: spokes. These sentinels of structure have kept wheels true while dampening impacts in almost the same form for more than a century.

But that’s all about to change.

The folks at Berd (Bike + Nerd) saw an opportunity for improvement. Utilizing ultra-high-molecular-weight polyethylene (UHMWP) this Minneapolis company produced a supple “PolyLight” spoke stronger than its steel counterparts at half the weight of high-end metal options.

We spoke to one of the brand founders and laced up our own wheels for a first look at this far-out tech.

A note on price: Each spoke costs $8. Most spokes cost about $4 each, so this is a significant cost increase.

UHMWP is the strongest material on the planet on a per-weight basis. Its popularity stems from its extremely light weight and famous resistance to abrasion, impact, corrosion, and UV damage. Actually, the outdoor industry knows this substance by a number of trade names: Dyneema, Spectra, and Nanofly, for example.

Brands already use it in myriad products, from backpacks to shoe closures to sailboat rigging. The stuff is widely recognized as tougher than nails and super light.

So how does a soft fabric spoke support a wheel? Well, bike wheels (even with steel spokes) use tension to support the wheel. Your spokes don’t act as pillars upon which weight rests. Instead, they are carefully tensioned to maintain – “true” – the wheel’s shape. It can get technical, but put simply, spokes bear tension rather than load.

Thus, a fabric spoke can function just as well as a metal one, or, in this case, even better. 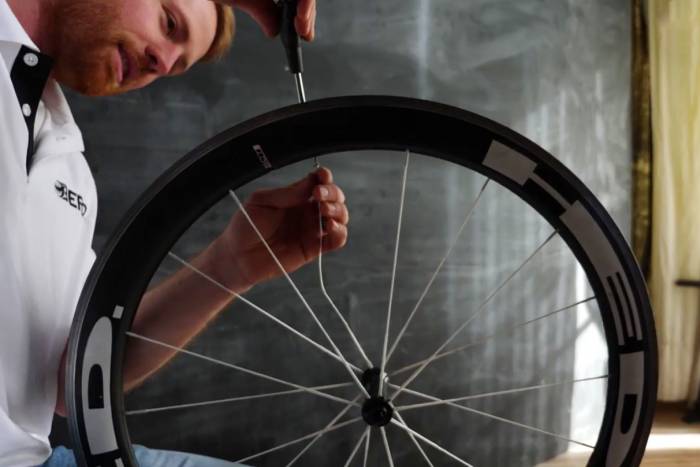 Entrepreneurial Drive Made It Possible

Berd, a small Minnesota bike company started by three University of Minnesota engineering students, has developed UHMWP into bicycle wheel spokes. Since inception, it took them about four years to solve the unique engineering challenges presented. We can’t discuss how they did it yet as they have patents pending, but they came up with some exceptional ideas to pull it off.

Berd claims its spokes are better than metal, and the specs certainly back up that claim. 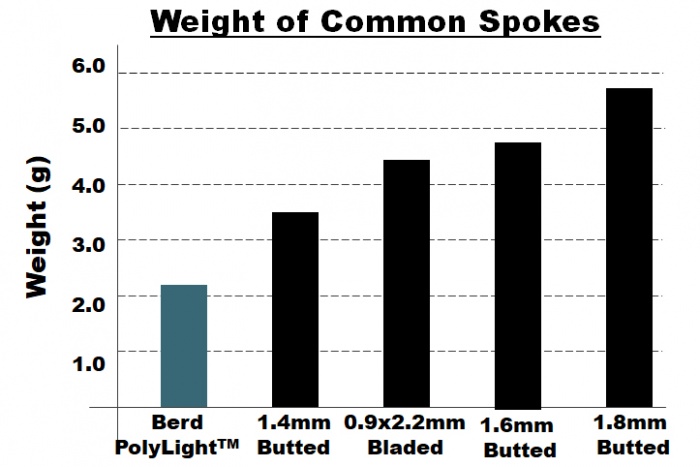 These spokes weigh only 2 grams, half that of a typical high-end spoke’s 4-gram weight. Meanwhile, a standard off-the-shelf bike spoke weighs a comparatively mammoth 7 grams.

Because of UHMWP’s strength, the spoke can be made extra thin, which gives it the same aerodynamics as a steel spoke. And testing reveals it has three times greater vibration dampening relative to steel, providing a smoother, quieter, more comfortable ride. 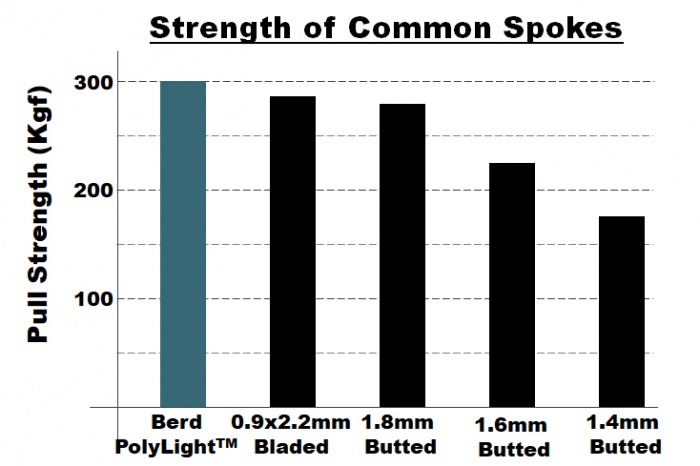 They are stronger in tension, as well and in impact resistance. It’s no surprise that this material is also used to create vehicle barriers around American military installations in the Middle East.

We laced up a pair of wheels with Berd spokes to put them to the test in real riding conditions.

While building the wheel, we were impressed at how similar to normal spokes they behave. They can be used on any wheel, as they use standard Sapim Nipples. 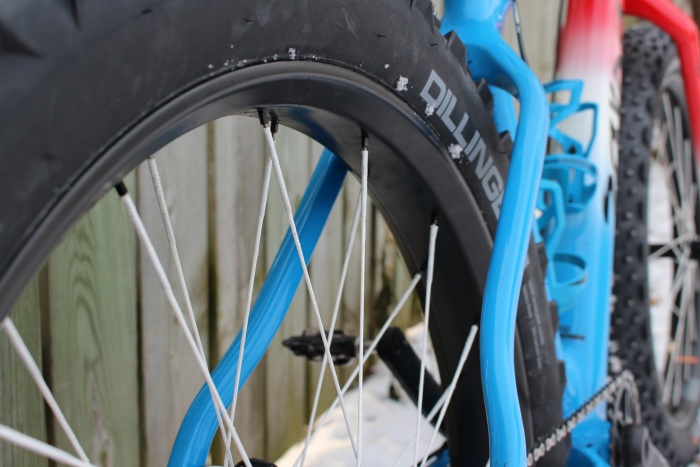 Lacing the hub side took some extra work due to their unique construction. But it was nothing the average wheel builder couldn’t do with a little patience and needle-nose pliers. Despite the spokes’ versatility, we recommend sending your wheels to Berd so experts can build them.

The fat-bike wheels we built were insanely light. They were quiet and otherwise no different than they were before despite being lighter. We didn’t notice any additional flex.

As far as durability goes, they are tougher than metal. In impacts, metal spokes may retain a small bend. But not these. We hit them with a maul and the spokes deflected it, undamaged. 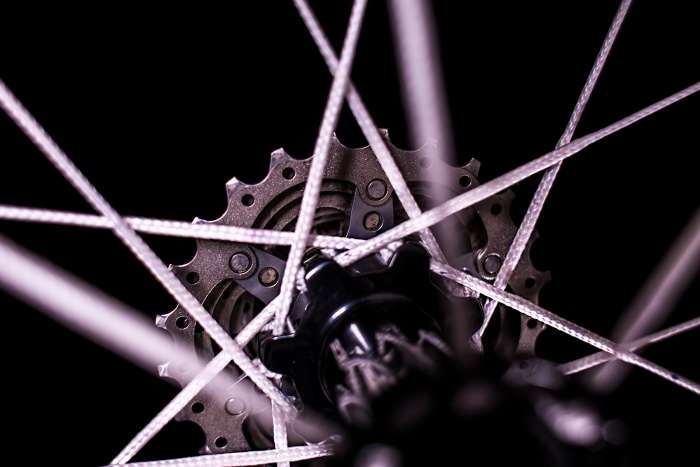 On our fat-bike wheels, it was hard to attribute much feel to spokes alone given the flexible and heavy nature of fat bike tires. That said, they worked great, as promised, and the wheels were much lighter.

Weight is the obvious advantage of these spokes. Built with Berd spokes, our wheels weighed 84 grams less per wheel.  That’s a reduction of more than a third pound of rotating weight, which is more than one and a half sticks of butter.

My gut tells me that the vibration dampening offered by these spokes will be best experienced on a road bike. But we haven’t had the chance to test them there, but we hope to very soon.

After we jumped down the “bike nerd” rabbit hole, we came away impressed. These spokes seem poised to change the world of high-end bike wheels in a huge way.

Saving…
$6,500 MTB vs. The Big Flyer: Who Will Win?
France Bike-Share Ends After Mass Destruction, Theft
×