In the face of hypothermia, the difference between life and death could come down to a single match. Or, in more common conditions, a good fire-starter will get your campfire blazing in no time flat.

Match, lighter, or spark-creating ferro-rod? The question of the best fire-starting device for outdoors use is complex and rife with personal opinion. We put a bunch of fire starters head to head to find the strengths and weaknesses of each.

We tested several readily-available matches, lighters, and fire strikers. Read on below for a summary of each specific model. 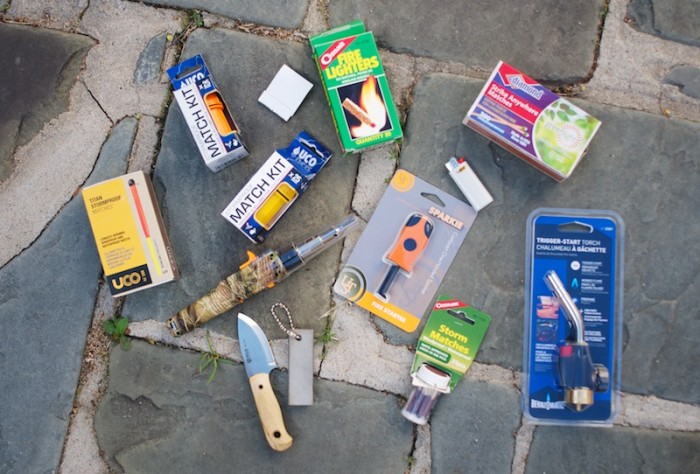 Whatever you choose to pack for your fire kit, be redundant, with more than one fire-starting tool, especially if you will rely on a blaze for heat or cooking. Be sure to store fire-starting materials in a waterproof container, and consider packing them with additional fire-accelerating tools like tinder, petroleum jelly soaked cotton balls, or candles.

Methodology: We tested each lighting implement in three scenarios: Dry and no wind, wetted and allowed to partially dry to simulate dew or rain, and in high wind (from a fan) with tough-to-light damp paper.

What We Learned: Best Fire Starter Or Camp Match

Before we dive into the nitty gritty of each fire starter, here’s a summary for those of you who just want the basics. 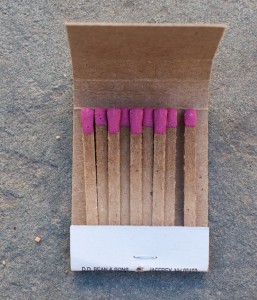 Paper matches picked up for free from gas stations, restaurants, or bars are the epitome of budget gear — super cheap, but only semi-effective. These scored the worst of our test subjects (that were not disqualified).

Soak-and-dry-test After being sprayed down with water and let sit for a half hour to mostly dry, the paper matches failed to light, although the sulfur head did fizzle.

Against wind and damp paper: The paper match failed miserably under windy conditions against damp paper.

Verdict: While paper matches are super cheap and plentiful, they are not a great fire starting option for outdoors use. 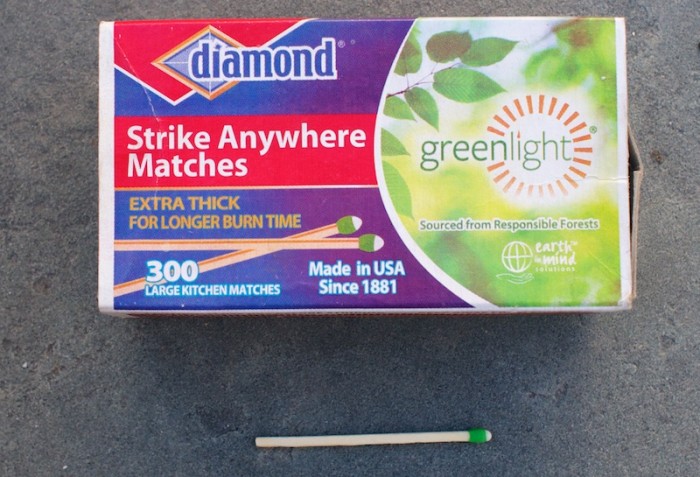 Wood matches, while not free, are darned close. Pick up a box of 300 matches for just a couple bucks. Strike-anywhere is a bonus for campers, as you don’t need to worry about a striker. Wood matches faired better than paper, but not by much.

Soak-and-dry-test: Only one of three matches lit. The other two broke apart when struck.

Against wind and damp paper: They failed to light damp paper when subjected to a 20MPH wind. 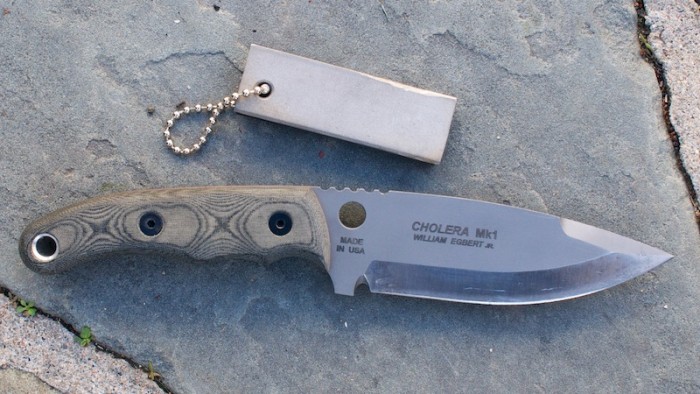 I know I’m going to hear an earful by giving this classic Coghlan’s Magnesium Fire Starter such a poor grade, but by golly, I’ve had enough of these damn things. Sure, this fire starter — a combination of hot-burning magnesium and easy-sparking ferrocerium, will start a fire. I could conceivably start hundreds — in ideal conditions.

But try the dang thing in cold, or wet, or God forbid windy conditions, and you’d better be an expert and have luck on your side. I consider myself a skilled outdoorsman and fire builder, and have failed with this thing in conditions that would have taken a match with no problem. I’m not saying they are worthless, just not good for emergency, or tough lighting, conditions.

Dry paper test: Magnesium scraped into a dime-sized pile on the paper, and sparks flying, it took 10 strikes to get the paper to light. No problem, but harder than it needs to be.

Soak-and-dry-test: This is the strongest argument for ferro-style starters — they don’t break down. Soak it for a month, toss it in a backpack, pull it out 10 years later, and it should still work. I have a couple I keep in my basement “just in case,” and for a few bucks, they are a good thing to have around.

I’ll admit right off, I wanted to dislike this thing, for the very reasons given above. But guess what? It works way better than I ever expected. The UST Sparkie flint produces really hot sparks, and it was far more effective and easy to use in our testing than the basic magnesium and ferro rod, above.

Dry paper test: Just a couple strikes, and we had fire. Surprise number one!

Soak-and-dry-test: If soaked, the Sparkie is useless. But simply wipe it off on a piece of dry cloth, and it works right away. It should last indefinitely, making for a good emergency item stored in your home or vehicle.

Against wind and damp paper: Again, this is where the spark-based lighting system struggled. The wind disperses the sparks quickly, and makes it tricky to nurture the tiny fire started by the sparks.

Caveat: You have to press the Sparkie against a hard object in order to create sparks. This does limit its usefulness. 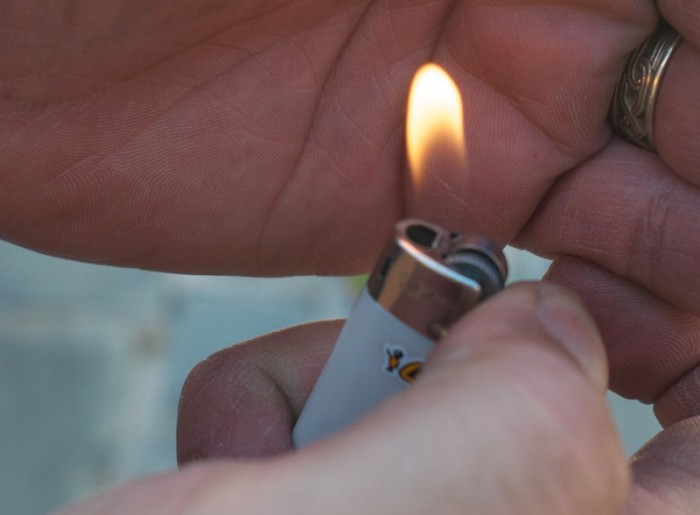 Everyone is familiar with the Bic for good reason; it’s a reliable fire starting tool that works for hundreds of fires. But it does come with drawbacks, especially for use in the outdoors. After testing, we will confirm — the Bic will remain our go-to fire starter for typical situations. It is not best for an emergency, but serviceable.

Dry paper test: The Bic lit paper fine, but required a cupped hand to block a bit of errant wind.

Soak-and-dry-test: In our test, the Bic did dry sufficiently to light a half hour after being soaked. But in the past, we have experienced Bic lighters failing to light after being soaked. In wet conditions, this can be a downfall. Even wet hands can turn them into a useless hunk of plastic, a major downfall in the rain.

Against wind and damp paper: If you’ve used a Bic much, you know you will begin burning your thumb after about 15 seconds of sustained flame. So really, the limitation here is your pain tolerance! That said, we got the damp paper lit, even in the 20 MPH wind created by our fan. 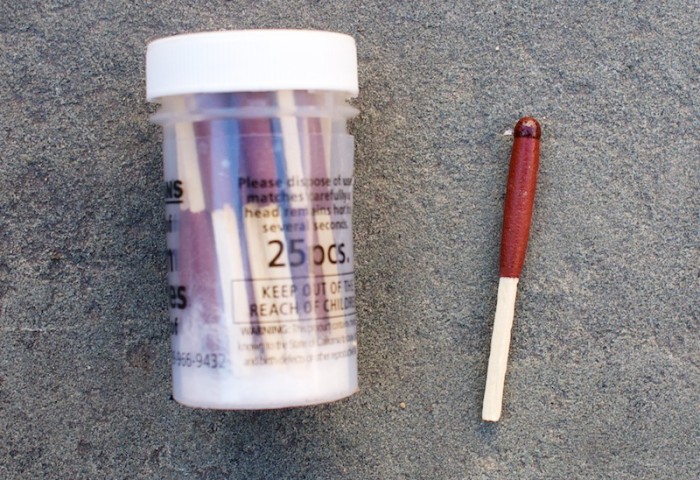 Coghlan’s Storm Matches are specifically designed for use in the outdoors. They ship in a simple plastic container with a striker on the top. They (like others we tested) are NOT strike anywhere. While the container is waterproof, the striker is not.

Dry paper test: Whoosh! These burned like a 10-second sparkler.

Soak-and-dry-test: These lit on the first strike.

Submersion test: The little plastic container is water resistant, and passed a 10-second submersion test. The striker, although wet, still lit a match on the first strike.

Against wind and damp paper: The Storm Matches lit well in the wind, and burned as normal, but failed to ignite the damp paper in our admittedly harsh test. It did start the paper smoldering, but didn’t burn long enough to light fire. 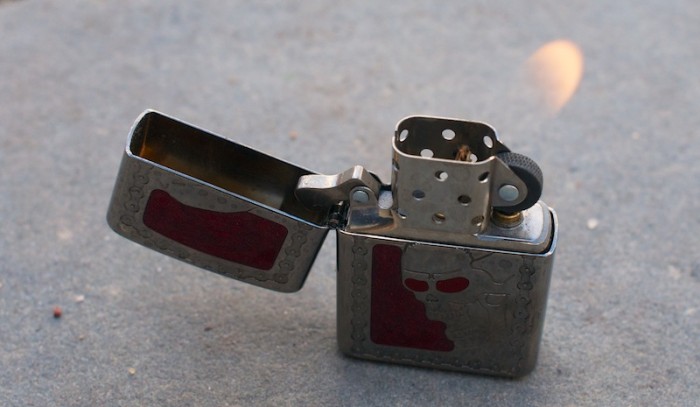 Zippos aren’t just for smoking. The iconic, USA made lighters work great for fire starting in the outdoors, and did well in our test.

Dry paper test: One flick, and the smell of lighter fluid was replaced with a flame that easily ignited paper.

Soak-and-dry-test: The Zippo dried out enough to light in a half-hour. Like the Bic, it won’t spark once the flint or steel is wet.

Against wind and damp paper: The Zippo is the first “windproof” lighter, and it lived up to its name in our test; the flame withstood wind from a powerful fan. It also remains lit as long as you leave it open, saving you from burning a finger when lighting damp material. It passed our test, although took some time and re-strikes to keep the flame lit.

Caveat: Zippos dry out and become useless if not maintained and refilled. For a non-smoker or others who don’t constantly use a lighter, this will happen within a month, so you need to be sure to re-fill a Zippo before every trip. This makes them a poor addition to an emergency kit, where you should stick with items that require no maintenance. 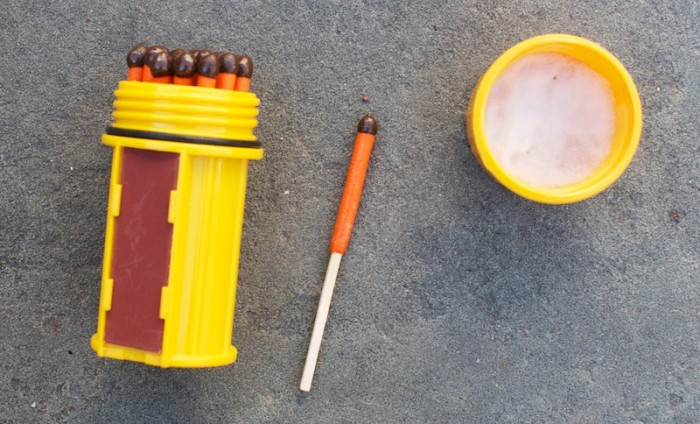 The UCO Stormproof Match isn’t the biggest, or best, match in our test (that honor goes to its big brother). But in the form of this kit, it is the most useful. It is our pick as the best emergency fire starter we’ve tested.

Dry paper test: I’m pretty sure I heard it laugh at this “test.” The Storm Match burned like a blazing sparkler for a solid 14 seconds.

Soak-and-dry-test: One strike, and it blazed the same as when dry.

Submersion test: The UCO Stormproof Match kit comes in a really nice, hard plastic, waterproof case. It seals shut with an o-ring, which is the same way waterproof camera housings secure valuable cameras 100+ feet deep in the ocean. Even when soaked, the striker on the outside of the case worked to strike the match. Two spare strikers are housed inside the waterproof container.

Against wind and damp paper: This is the smallest match that passed this test, igniting damp newspaper in a 20MPH wind. 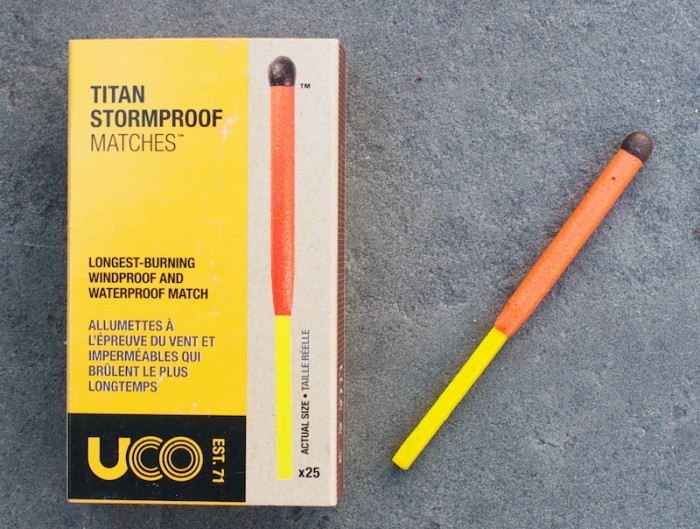 Ok, so the Titan might be overkill for most folks. But if a blazing hot fire is what you want, the Titan won’t let you down. We did not have the kit to test, but it appears to be the same as the Stormproof Match Kit, above, only bigger.

Dry paper test: We didn’t even bother with this one, instead, we tried to wave it around like a sparkler to see if it would go out… nope. The ridiculous sulfur-fueled blaze crackled for 20 full seconds.

Soak-and-dry-test: Much like it’s smaller sibling, the Titan lit on the first strike, and burned hot.

Submersion: We did not have a kit for this match, and could not test it. The brand claims it will light after submerged, just so long as the match is dried and the striker isn’t saturated. It is packaged with spare strikers inside the waterproof container.

Against wind and damp paper: Titan for the win! This thing burns long enough to dry out the damp paper, leaving you with a hot fire that will continue to burn long after the match is out. Wind didn’t have a chance. 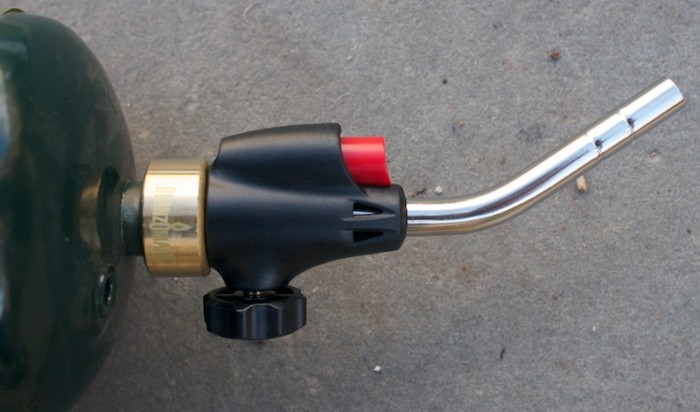 Short of a gallon of gasoline, this is the surest thing out there to get a fire roaring.

After this test, I plan to bring the Bernzomatic blowtorch on any car camping adventure when rain is forecast. It’s just so, so easy to use. Screw it onto the same propane tank as your camp stove, turn a knob, push a button, and blowtorch your way to a fire in any condition that fire is possible.

Dry paper test: Don’t even bother. Just use your Bic. Forgot your Bic? Well, I guess this will have to do. Kazzam!

Soak-and-dry-test: I submerged the Bernzomatic, then shook out the water and put it right on a propane tank. It ignited on the first click.

Against wind and wet paper: This is where the Bernzomatic torch shines. Give me your soggy, your soaked, your dripping wet tinder, this thing will torch it dry. We tried to make it fail, soaking newspaper to the saturation point. But when we put the torch on it, 15 seconds later, the blue flame had dried the paper enough for combustion. After another few seconds the paper was fully engulfed in flame.

Caveat: You need a propane canister, which will add bulk and weight. But if weight isn’t an issue (car camping) or you need a foolproof fire-starter, this torch is an awesome option.

Up Next: A ‘BAND-AID’ For Outdoor Gear