For the last five years, the ‘legendary’ Bomberdrome has been the domain of a select few daredevils. Now, this incredibly sketchy marvel of backyard engineering can be yours!

Eighteen feet across at its center, 26 feet at the top, this wood-and-pipe bowl towers five feet into the sky, daring cyclists to give it a spin.

It’s the U.K.’s iconic, homemade velodrome, affectionately known by its creators — the Ministry of Bicycles — as the Bomberdrome. But it goes by another name as well: The Bicycle Wall of Death.

Though there is no documented count, the number of lives actually claimed by the super-structure hovers around zero. That could change, however, as the Bomberdrome is up for sale now on eBay. And while bidding started at a buck-and-a-quarter, the price is now inching toward $800.

Bomberdrome ‘Wall Of Death’ For Sale 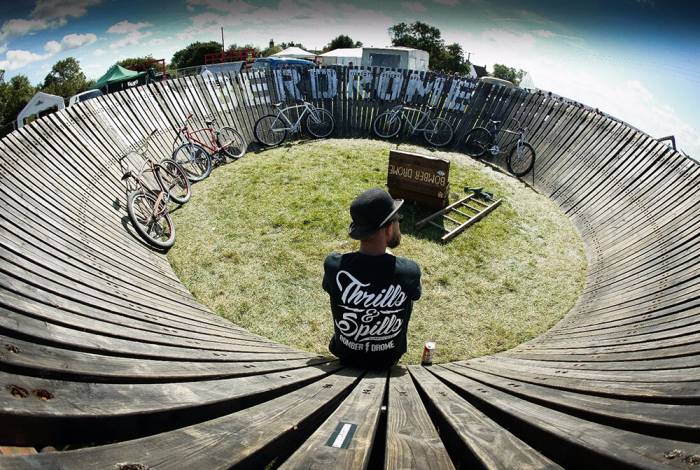 For those who don’t know, the Bomberdrome was built five years ago by two brothers. Self-proclaimed “bicycle idiots” Bill and Reg Pollard set out to create a cycling cousin to U.K.’s famed “Wall of Death” motordrome.

Check out this documentary for a full history of the Bomberdrome:

Since then, the Pollards and a group of devil-may-care mates known as The Ministry of Bicycles have enjoyed some measure of celebrity. The group has taken the pipe-lashed-plank velodrome on the road to festivals and events. They welcome any to try it out, promising them “the best Facebook profile picture they will ever have.” 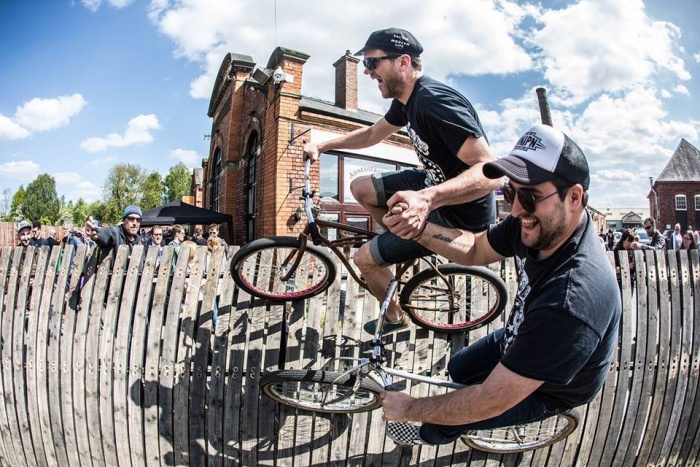 And, in case you’re on the fence about the Bomberdrome’s safety, be assured: It is absolutely, 100-percent NOT safe. Take this head-on collision as proof:

And if that’s not enough, just peruse the eBay listing to dispel any illusions owning this is a reasonable idea:

“It comes in eight panels that lock together via spigots and bolts, a couple of the spigots could do with looking at in the near future, and possibly need a touch of welding, and they could all do with being re-tapped for the bolts, there are three steel ropes to hold it altogether and we often run a large ratchet strap around the center for added stability, there are no external supports.”

If, after all that, you still want this in your backyard, then go to the eBay listing and put in a bid. But make sure you will be near Northampton when the bidding ends; the Bomberdrome is available for pick-up only.

Just note, the eight-piece Bomberdrome “WILL NOT fit in a van.” Luckily, though, it comes with “its own VERY dubious trailer.” Have fun!

Up Next: Obstacles And Tailwinds: Highs And Lows Of Long Distance Biking