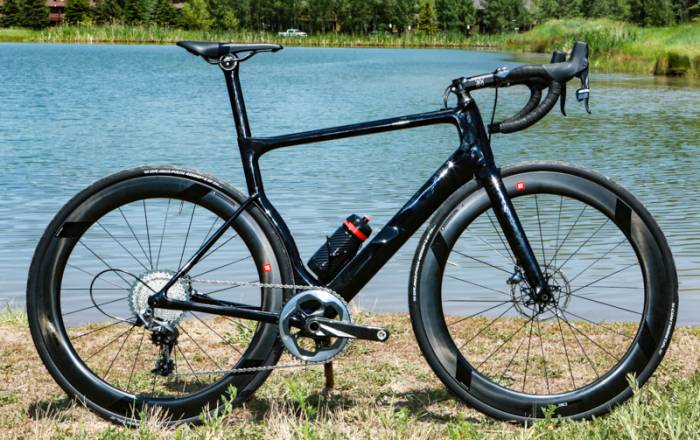 Gerard Vroomen, a visionary known for founding the Cervelo bike company, created a bike that could set a standard for modern road bikes moving forward.

I met with Gerard Vroomen to discuss his latest work (and test ride it) in Utah this month at the Press Camp event. With it, his goal was to redesign the road bike from the ground up with assumptions about what the future will bring. In my opinion, Vroomen nailed it.

In an industry where evolutionary changes are the norm, the 3T Strada is a rare exception. It makes leaps in design that will become the new normal. These changes make a bike faster, more comfortable, and lighter.

These are bold claims. Read on to see why I think this is the future of bike design. 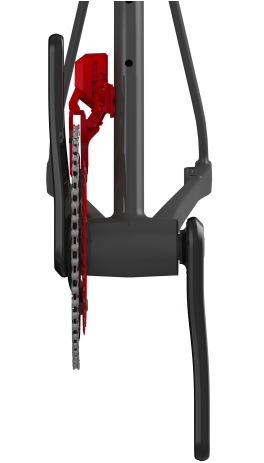 Front derailleurs are still used in some applications. But they are quickly disappearing due to the increased gear range of the modern rear cassette.

In fact, the Strada is designed around a yet-to-be-announced rear cassette. The details of this cassette are still secret, but I got a preview at Press Camp.

Here’s what I know: Vroomen designed the cassette himself, and it will mount to a new “XDR” driver from SRAM. The bottom five cogs will be one tooth apart, so the steps between gears is not uncomfortably large.

With this setup, each gear shift will be about 10 percent easier (or harder) at any point on the cassette.

It turns out that, hypothetically, a 9- to 32-tooth rear cassette will have greater range than a standard cassette with a front derailleur.

I don’t know whether the new driver will allow a 9-tooth small cog (the smallest that exists today is 10-tooth), but our guess is that SRAM would not create a new driver if it didn’t have a good reason—and getting down to a 9-cog would create a much wider gear range.

Technically, the gaps between gears on a 2X front derailleur setup are slightly smaller. But that’s assuming the person riding the 2X shifts perfectly through the available gear combinations, which does not always occur as shifting the front rings causes very abrupt changes in gear ratio.

What is safe to assume is that this new 1X design is:

The Strada 3T was designed as if common rim brakes never existed. Look at the distance from the top of the front wheel to the bottom of the frame in the picture below.

The fork crown is incredibly small and aerodynamic relative to any bike previously made. This lowers aerodynamic drag and improves front end stiffness.

This is possible because there was never any consideration for a rim brake mounting location. It is a new design paradigm, and one that ultimately results in a better bike.

The rear wheel is tucked in very tight and hidden behind the frame to reduce drag and increase power transfer. The rear end of the bike is only about 410mm long, the shortest we have ever seen. 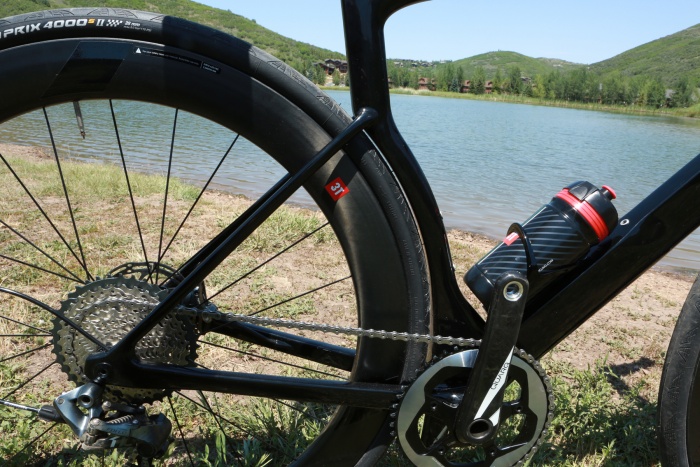 What makes this possible is the lack of a front derailleur, as the angle of the chain is less extreme with only a single ring up front.

Vroomen designed the bike around 28mm tires. Now that rim widths match this wider size, the combination is not slower than narrower rims and tires,

Wider tires inflated with lower pressure absorb vibrations better. They keep the rider moving forward instead of up and down. Additionally, because the casing flexes slightly less, wider tires often reduce the rolling resistance too. Wider is the future.

Weight is the only drawback, and the consensus at research labs (and in the pro peloton) is that increased comfort is worth the small increase in weight.

The bike’s carbon fiber tubes were designed in a wind tunnel and modeled with software that took into account air movement across the frame in three dimensions.

This resulted in tube shapes that curve in three dimensions. These shapes reduce drag by better understanding how air is moving across the frame and also across the rear wheel and water bottles.

Overall, this bike felt like a typical high-end road bike, which, to put it bluntly, is pretty damn great. The bike was fast and quiet, with no weaknesses in terms of feel or handling.

I am a heavier, stronger rider than most, and the sprint response was very good. The bike is stiffer and faster than most bikes, which really impressed me considering the bike’s light weight and aerodynamic shape. I can sometimes wind a bike up and feel a small loss of power, but not on this one. 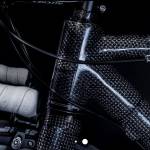 A new composite stronger than steel, but so light it floats on water could revolutionize bike frames. Read more…

The Strada did not feel particularly comfortable, but not uncomfortable either, and it was certainly quiet and solid over bumps. By orders of magnitude, the biggest improvement that can be made in any road bike’s comfort is moving up from 23mm to 28mm tires.

This bike will clear 30mm tires. So if comfort is a concern, then get some wheels that accommodate 30mm rubber and you will have little additional aero drag.

The angle of the chain while in the largest rear cog (the lowest gear) was a bit extreme. It looked so visually, and I could also hear a faint tick of each chain link contacting each ring tooth as they meshed.

This may have been due to the fact that the bike I rode was running an elliptical front ring. I did not have the opportunity to discuss this with Vroomen, but I would suggest the prototype I was on was indeed right at the limit of allowable chain angle.

Worth noting: I was not riding on the new cassette that will be produced for the bike. Perhaps the production version will solve this angle issue. Considering how good an engineer Vroomen is, I suspect that will be the case.

This is the most exciting bike of the year. The more I rode it, studied it, and daydreamed about it, the more I realized the Strada is something very special.

It may not be for everyone, but like Vroomen told me: “There are enough bikes for everybody already, I just want to build the best and most beautiful ones.”

This is the bike of the the future, here today.