After a failed attempt to complete Iowa’s Wind and Rock gravel race, an ultracycling crew reclaims the victory — this time in Colorado.

It’s a free 340-mile cue-sheet navigated, self-supported ultracycling gravel race with a staggeringly low number of finalists. As described by TJ Windsor, the Iowa Wind and Rock is the most “miserably awesome I’ve ever had.”

Back in April 2021, Windsor along with Leonardo Brasil, Brendan Heinig, and David Sedelnick were unable to finish the infamously challenging ultracycling gravel race. So they decided to try again — this time, on the group’s own terms. Why? Because adventure.

“The idea was redemption,” Heinig stated. “To finish what we set out to do without having to go back to Iowa.”

And that is precisely what they did. Brasil designed a ultracycling race that mirrored the Iowa challenge. The route begins and ends in Brasil’s apartment in Denver. The self-supported course covers roughly 345 miles with an elevation gain of 25,000 feet. It travels along gravel roads, south to Colorado Springs, and then back up to Denver.

Heinig adds, “This will be our longest continuous ride ever, so I just want us all to finish it and be able to say we did it and just to have an amazing time.”

“In all seriousness, I think that what we’re really hoping for is exactly what we’re calling this, which is a redemption ride,” Sedelnick said in earnest.

The film “Because Adventure’ follows the crew as they ride together toward victoriously accomplishing that goal. 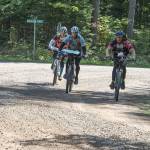 Adventure racing is a true multisport pursuit that requires a wide skillset of outdoor disciplines. In this article, we look at tips and techniques from the USARA for the two most common disciplines in the sport: biking and trekking. Read more…