In 2010, Bonnie Gagnon nearly died because of a rare and aggressive bacterial infection. It entered her lungs, causing serious damage and then, for the first time doctors had seen, it harbored itself in her lower back and began to liquefy her insides.

In an effort to save her life, doctors had to completely open her up, placing what was left of her intestines on a table in an attempt to piece the solid parts back together. They removed her appendix and performed a full hysterectomy. After several surgeries, blood transfusions, and massive amounts of the strongest antibiotics they could summon, they watched to see if she would survive.

Miraculously, she lived. Now, after years of training and recovery, she’s prepping for one of the hardest mountain bike races in the United States. This is her story.

THE MOON HID IN CLOUDS OVER THE WOODS. The trail stretched ahead into the night, snow crunching under my fat bike tires as a storm raged.

It was 2013, a January night in northern Minnesota. My challenge was the Arrowhead 135, an ultra race that tracks through winter wilderness for its namesake 135 miles, from the Canadian border south.

The ghost of my breath rose up before me, sliding over the top of my head as I rolled. The pain in my legs was nothing compared to the well of satisfaction I would be able to draw on should I finish the race, but ultimately a massive storm forced me (and more than half the field) to drop from the competition.

For me, adventure doesn’t come in a neatly wrapped box. It comes with a bicycle, dirt- or snow-riddled terrain, and a physical challenge that pushes me from the shores of comfort. That’s what happened at the Arrowhead, and what I look forward to in the upcoming Tour Divide, a 2,745-mile race across the Rocky Mountains.

Every adventure has a beginning; a reason, a purpose, or a vision of why and what that adventure will look like. Mine started in the ICU.

Some people stare up at the stars at night, tiny speckles of brilliance radiating their light towards the earth. Cocooned in sterile darkness, I glanced up at the ceiling, barely able to find the machinery pattern imprinted in the tiles above me. But I had no energy for such an overwhelming task. All I could do was breathe.

In 2010, I was diagnosed with a deadly bacteria called Fusobacterium Necrophorum. It spreads faster than cancer. Carried in the back pocket of this bacteria, like a switchblade knife, was an extremely rare disease called Lemierre’s Syndrome. It entered into my lungs, causing serious damage and then somehow, like an impossible dark miracle, it harbored itself in my lower back and began to jellify my insides. Traveling in a forward and downward direction, it attacked everything in its path and it double dog dared the doctors to act quick enough to save my life. 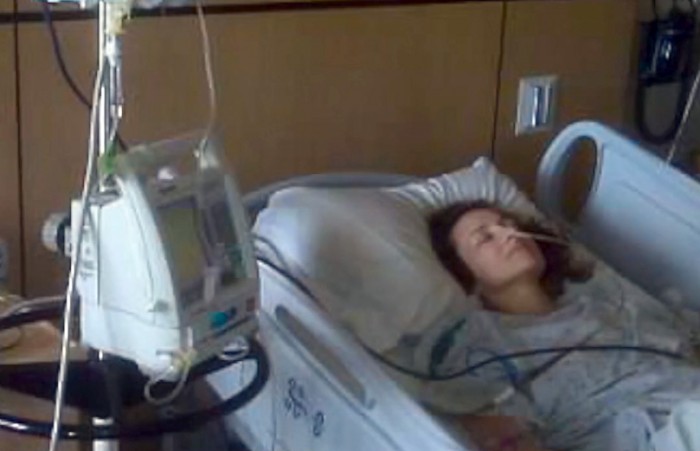 My torso was torn open, my intestines laid upon a sterile side table, and a team of surgical magicians began dosing my insides with the strongest medicine they could brew up. Eventually, they closed me up, but not until after they had cut and pieced my intestines back together, securing them to surrounding areas of my body to keep them from writhing around like an injured snake.

They had also removed my appendix and performed a full hysterectomy, those areas of my body now totally destroyed by the venom of the bacteria. After multiple surgeries, blood transfusions, and massive amounts of the strongest antibiotics, they watched with deep skepticism to see if I would survive. Miraculously I did. But something happened in that transitional graveyard.

There’s a thought you can’t escape when you’re told that you are not going to live. The toxicity of the septicemia was undeniable. I could almost smell it coming out of my skin; taste it in my mouth. They say the pain was the equivalence of being burned alive with nothing to douse the flames.

It was simply unbearable. The idea of having thoughts was too overwhelming and so I allowed my mind to flatline. I remember it feeling like I was suspended in a vast dark place, floating. Waiting. For a brief moment, a singular thought crept in—a sole question that sat in my mind. “What is the most important thing to me?” For mindless hours no other thoughts crowded in nor escaped; just this one in all of its complex singularity.

When I finally left the hospital I was on a mission. The infectious disease doctor had given me one assignment and I was determined to turn it in on time.

“Go and do whatever it is that you’ve always wanted to do.”

My prognosis was grim. The doctors offered no assurance that they had cured me nor killed all of the bacteria inside me. How could they? They had never seen it before and were playing Russian roulette with antibiotics, hoping the firing pin would eventually ignite the powder

I had selected the topic of my assignment and it coincided with the answer to the singular question that had taken a strong hold in the midst of my mind while lying in the ICU bed.

I wanted to ride my bike, just one last time. I wanted to enjoy that thrill, that unsorted rush of satisfaction that comes with self-propulsion, freedom of movement, and unlimited possibility. I wanted it so bad that it was like a new taste that filled my mouth and covered my tongue. It wasn’t the only answer to that pivotal question; it was a piece of it and the other two pieces were already in place.

I started back slowly, pain with every pedal stroke, not waiting for all of the stitches to heal. I researched rides and races, having become an Ironman only a month before being rushed into emergency surgery.

Racing was in my veins. I selected shorter rides that grew with intensity and duration, from the MS150 to the Leadville 100, casting my net across all four seasons and any state.

Eventually, I pulled an entry in the toughest mountain bike race in the world, and with my mouth nearly gaped open, my heart pounded with excitement and life. This race had everything I wanted – forestry, dirt, sun, snow, wildlife, massive elevation gain, and thousands of miles of unlimited terrain, plus challenges that give you the opportunity to discover just how alive you really are.

On June 10th I will begin racing the Tour Divide. Starting off in Banff, Canada, alongside approximately 140 other endurance athletes, we will traverse the Continental Divide, crossing over it more than 30 times before reaching the border of Mexico.

Riders must remain fully self-supported as they cover the 2,745 miles of tough terrain that encompasses over 200,000 feet of vertical climbing. It is the race of a lifetime; the answer to the question that had dangled in my mind while I waited without expectation in the ICU. This June I will go for one more ride.

Up Next: The Greatest Beer Event That You’ve Never Heard Of