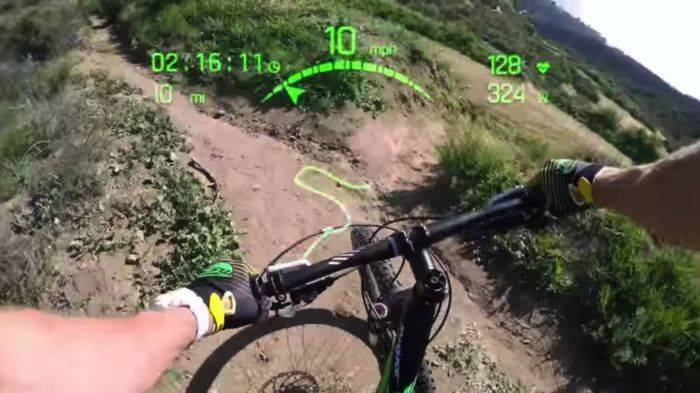 [leadin]Fighter jet technology on the bike? A new product puts data like speed, direction, and elevation right into your field of view through a projection on a transparent lens.[/leadin]

Heads-up display technology from Everysight Raptor is derived from fighter jet helmets and pumped right into a pair of streamlined sunglasses. Soon, road and mountain bikers will be able to queue up an augmented reality system to help them race and train.

The Raptor is created by the 2014 startup Everysight, a spin-off of the largest defense company in Israel, Elbit Systems. The company creates fighter jet and rotary wing helmet-mounted displays and “augmented reality” systems for fighter pilots.

For cyclists, the eyewear will integrate data seamlessly into daily rides or races. While product details are under wraps until the 2016 launch date — to be determined — this is what we know: The smart-glasses “Beam” technology will display information on the interior of a lens that is offset from the wearer’s field of vision and controlled by a finger swipe on the temple.

Similar technology already exists. Brands like Recon put a small screen on the edge of an athlete’s field of view. The Garmin Varia Vision In-sight Display ($400) is on the market as an add-on attachment for sunglasses.

But the Raptor is unique as an all-in-one product with some additional features such as a built-in POV camera.

A New Way To See Data

Serious cyclists are data-driven athletes. And while instruments have been around for decades to monitor speed, cadence, watts, and more, they require a rider to look away from the road ahead to read instruments, usually mounted on the handlebars. This can be tricky at high speed or in tight pelotons.

The Everysight eyewear shares metrics such as watts and speed without the need to look away from the road.

Additionally, the virtual overlay can create objects and road markers in the cyclist’s field of vision. For instance, a two-dimensional map view of the road that lies ahead, the gradient on an ensuing climb, or the angle of the corners on a descent.

Another example: A finish line can be projected to demonstrate where a cyclist is relative to competitors and how fast she should go to beat them.

Of course, the rugged training ride or heart-pounding race wouldn’t be as exciting if we couldn’t share it with friends and family later, right? The eyewear has an embedded look-and-shoot camera that lies in the cyclist’s field of vision to capture videos and images.

From Helmet To Sunglasses

“The biggest challenge was taking a helmet-mounted display system that costs over $100,000 and shrinking it into a stylish pair of sunglasses that provide you with all of these features. We’ve been working on this project since 2001, and many iterations later we are now at the point where we are getting ready to release this product to the market,” Lance Berks of Everysight told Bob Babbitt in an interview on Babbittville Radio.

The sunglasses aren’t limited to biking. Other uses could be sailing, running, or other fast-action sports like skydiving or hang-gliding.

“These are glasses that are designed for cycling, but if you want to go kayaking or hiking there are many different benefits for glasses,” Berks told GearJunkie.

We’ll be watching closely to learn more as this technology becomes available later this year.

— Visit Everysight.com for more information. The Raptor will be available in 2016, with the exact date and specific product details not yet released at time of print.