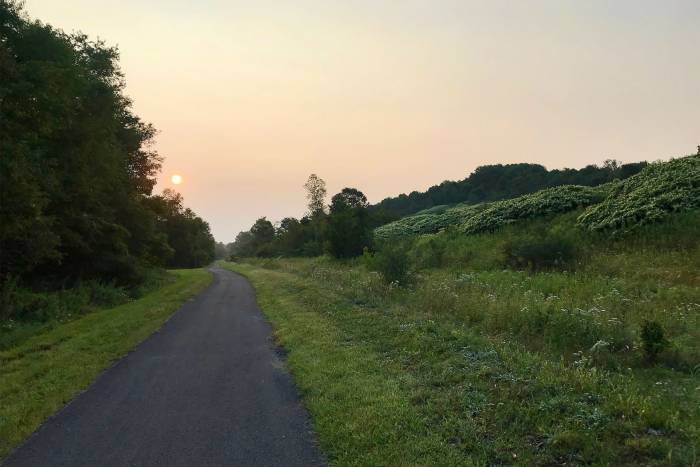 Twelve states, 4,000 miles, and zero cars: The Great American Rail-Trail took a big step toward becoming a reality this month.

Get on your bike by the Space Needle and get off at the White House. Every cyclist’s grand dream of a safe, accessible, transcontinental bike trail started to materialize last week when the Rails-to-Trails Conservancy (RTC) offered a first glimpse at the most feasible route.

Best of all, RTC said more than 50 percent of the 4,000-mile route already comprises open, off-road trails. In its announcement on Jan. 23, the nonprofit trail advocacy group outlined a dozen existing trails that will serve as the backbone of the Great American Rail-Trail.

“We are now confident that the Great American Rail-Trail can be completed,” said RTC president Keith Laughlin.

RTC’s unveiling stirs excitement among all hikers, bikers, and joggers. But the organization acknowledged a fully connected route will take “years” to complete. We reached out to RTC, and a spokesperson told us they believe the full route will be complete “within the next few decades.” But RTC added that more segments will come online every year.

Still, RTC spent the last 18 months poring over its database of more than 34,000 miles of open trails nationwide. The result is the current Washington-to-Washington proposal.

The organization said it also worked with hundreds of state agencies and trail partners to identify the dozen existing trail networks that will create the basis of the Great American Rail-Trail. And, it noted, those trails make up the bulk of the coast-to-coast, off-road trail.

As for the remaining “gaps,” RTC said it will reveal the full route this spring.

Here are the 12 mixed-use trails that will connect America.

Capital Crescent Trail (Washington, D.C., Maryland): This 11-mile trail begins in Georgetown, near the historic landmarks of the nation’s capital.

Panhandle Trail (Pennsylvania, West Virginia): The 29-mile trail heads west from the Pittsburgh suburbs into northern West Virginia. It serves as a literal gateway between the states.

Hennepin Canal Parkway (Illinois): The 100-plus-mile trail parallels the early-20th-century canal and runs west from the Illinois River to the Rock River.

Cowboy Recreation and Nature Trail (Nebraska): One of the longest rail-trails in the country, this 219-mile trail traverses rural Nebraska. It connects small towns and offers views of the High Plains.

Casper Rail Trail (Wyoming): This 6-mile trail is an important connector in one of the largest cities in Wyoming.

Palouse to Cascades State Park Trail (Washington): This trail is another of the nation’s longest rail-trail conversions. It spans more than 200 miles across Washington and marks the terminus of the Great American Rail-Trail.