The National Interscholastic Cycling Association has moved the needle in youth mountain biking like no other club or organization in North America. And Austin McInerny is the man behind its vision.

The once-underground, seemingly individual endeavor is now one of the fastest-growing high school sports, giving even embedded athletics like football a run for its money. Here’s how a diehard NICA leader has helped achieve the unimaginable in under a decade.

Move Over, Ball Sports: High School MTB on the Rise

Mountain biking isn't quite ready to overtake high school football among youth. Before long, though, it just might. Read more…

Soul of a Coach, Energy of a Leader

The tenure of NICA president Austin McInerny, 51, will not be forgotten. The hunt is on for his replacement. But he will leave enormous shoes to fill. The head of NICA for the last 7 years, Berkeley, California-based McInerny quit a lucrative environmental consulting business to see where he could help take scholastic mountain biking.

But first, he was a coach for Berkeley High School, which spurred the inaugural NorCal High School Cycling League, the start of a national mountain bike race series. He watched freshmen too shy to look an adult in the eye blossom into confident, bold people just by riding and finding a community of supporters.

And none of these kids were his own.

McInerny and his wife, Celeste McCartney, who coached by his side, became surrogate parents of sorts, more mentors than instructors. Berkeley high-schoolers would stop by the McInerny household for a bike fix — and often just to chat.

“We created a community around this high school team, and I saw what it did for families and kids who were not playing traditional sports,” McInerny said. “These kids, some with no peer groups, it transformed them.” 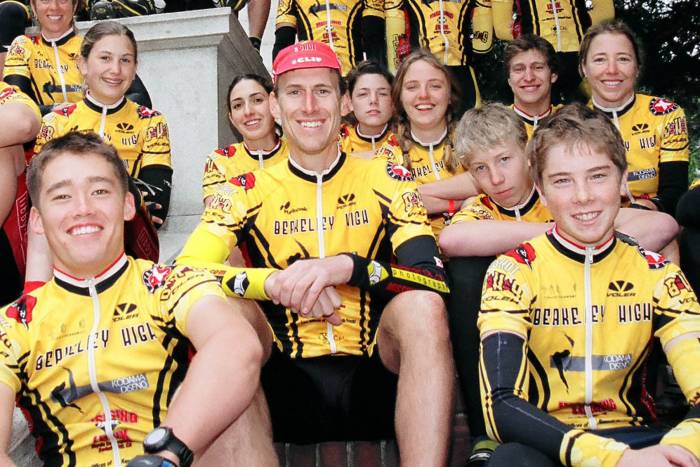 He didn’t want any regrets in life. So he put a career on hold to coach and eventually put more energy into developing and leading NICA. He called it a once-in-a-lifetime opportunity. Four years into the job, Bicycling Magazine named him one of its New Heroes of Cycling.

Today, NICA has 23 employees and runs programs in 27 states. New regions constantly bid for new programs. “We are not slowing down. The demand is there,” McInerny said. NICA has seen a 30- to 40-percent growth rate year after year. You read that right.

But McInerny admits it’s time for fresh blood — someone with the vision to carry the burgeoning organization forward. “As the program has mushroomed, I’ve had this self-realization that this thing is bigger than my skills right now. I’ve never run a nonprofit,” he said.

“And, frankly, I’m a little fatigued. NICA needs someone that burns at 110 percent.”

The NICA has narrowed some 60 candidates down to a handful. NICA will likely make a decision in the next month or so. The next NICA leader will fine-tune the details that weren’t previously addressed given the program’s remarkable growth.

“We have big enough numbers now and the right kind of people getting involved that we can start to specialize,” McInerny said.

For example, NICA is running youth mountain bike safety studies with the University of Utah. The organization has already discovered that more accidents happen in the last 15 minutes of practice. That’s when kids are tired, hungry, and just breaking down.

“We’re looking at the incidents of injury so we can talk to schools and have some research to back it up,” McInerny said. “We’ll be able to talk apples-to-apples with football and work on what can we do to minimize or reduce these risks.”

McInerny’s replacement will have a full plate. But he said that person won’t be alone at the table. “This isn’t the kind of job that you give a 2-week notice,” he laughed. “I’ve been working to set the stage for a smooth transition. And I will remain a resource during the transition.”

McInerny will remain in an advisory counsel role and would like to speak about his experience, a TED Talk maybe, he said. “I’ll always be a champion for the movement and want to still get out there on group rides.”

But first, a downshift is in order. McInerny has earned a rest on his laurels as the organization is poised to shift up a gear.

This article is sponsored by Hydro Flask. The brand released the Journey Series, hydration packs made for mountain biking.

Up Next: Sea Otter 2019: The News From America’s Bicycle Show