The Interbike trade show debuts the future of bike gear each September amid the neon lights and casinos of Las Vegas.

Companies unveil bikes, apparel, and accessories for the upcoming season at the show. We were on the floor at Interbike — and outside of town at the “dirt demo” event — to soak it in. Here are a few “future” products, coming to market spring 2017, that caught our eye. 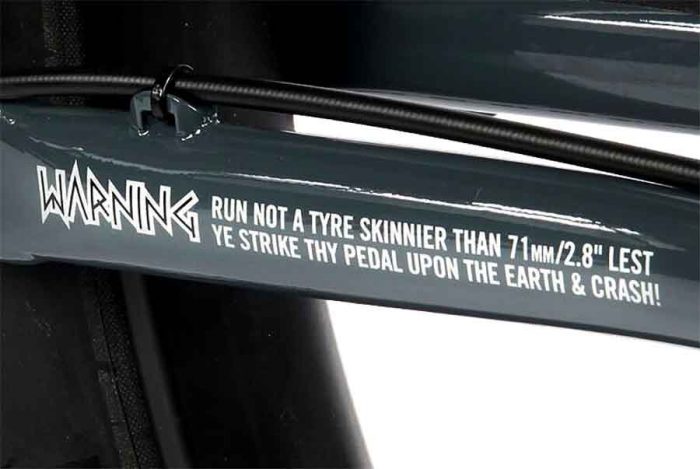 The ULV — pronounced “Ulf” — is part of Rawland’s BerserkerVerks line, and I cannot deny my Norse heritage. The steel frame and cool segmented fork looks durable, an imperative when traveling in the backcountry. And yes, that cool front rack (pictured in top photo, above) is included.

Riders looking for high-performance without a high price tag should check out the Hawk Hill from Marin. Its 27.5 wheels roll through just about any terrain with 120mm of suspension travel front and rear. 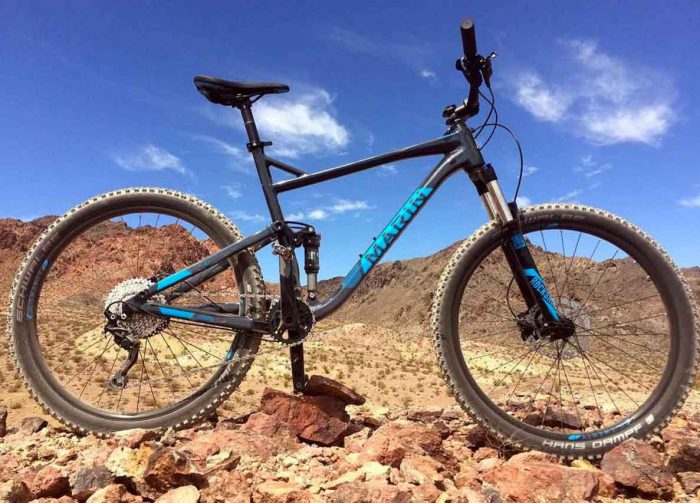 I rode it at the Outdoor Dirt Demo and was startled by how well it rode for a $1,500 bike. The Hawk Hill definitely punches above its weight class. Out of the gate it sports a de rigeur 1x Shimano drivetrain and hydraulic brakes, and it’s upgradeable with internal routing for a dropper post and convertible rear dropouts.

The Krampus has always appealed to bikepackers and dirt riders interested in maximum traction, and there’s no reason that the 2.0 version ($1,499 complete/$625 frame) will be any different. 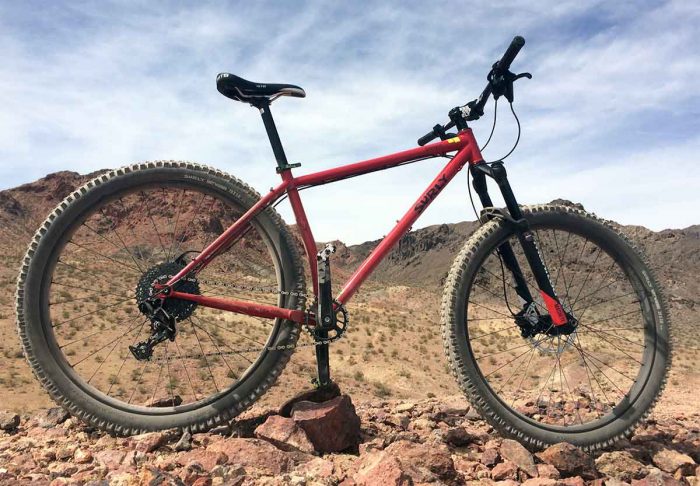 Stock models come with a rigid fork and plenty of bosses for lashing on racks, packs, bags, and burritos. I rode an upgraded version with a suspension fork, which added to the already-cushy ride of its 29+ tires on Bootleg Canyon’s rough trails.

With so many riders today seeking adventure in their outings it’s little wonder that more brands are popping up to fill the void. Germany’s Bombtrack bikes are now available in the USA. 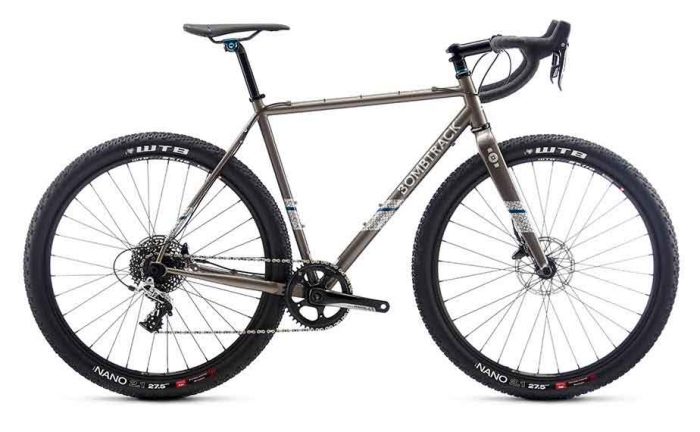 The Hook EXT model ($tbd) caught my eye with its drop-bar demeanor wrapped in a mountain bike stance. The 27.5 x 2.1 tires are swallowed by a massive carbon fork, and the Columbus steel frame is known to be both durable and comfortable on the rough stuff.

A new brand, Link Bicycles focuses on low maintenance and reliability with its complete builds. They include internal hubs and belt drives and are designed for “daily European-style riding,” the brand notes. 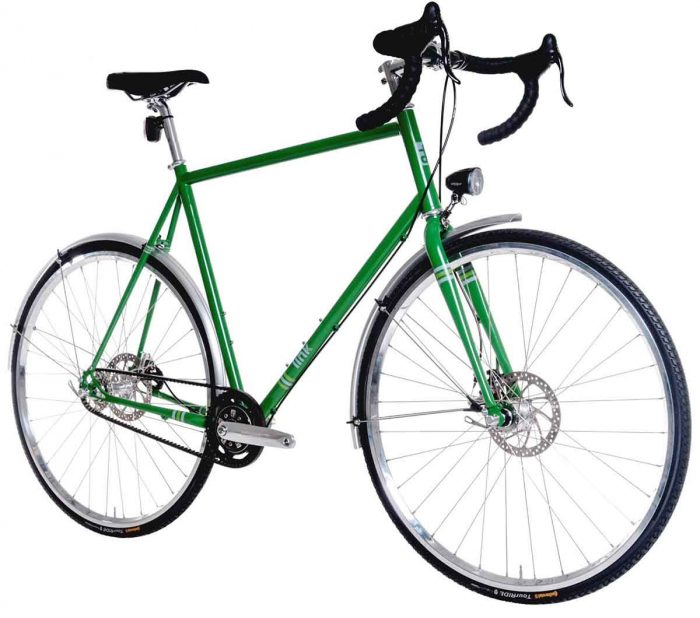 The Gates Carbon Drive belt system is grease-less, and Rohloff’s internally-geared SPEEDHUB gives a range of gears and shifting but without a derailleur. Said one of the founders: “Bikes should be as functional and reliable as a car; every time you hop on your bike, you should be able to just pedal and go.”

Sometimes you can still find innovation on the edges of the Interbike show floor. The NSR Riding Tent (price $tbd) caught my eye for bike camping. Its clever indoor storage system provides both coverage from the elements and some theft protection for the bike, as you sleep right next to your ride.

It’s still in the pre-production phase, but with a target weight of about 3 pounds the NSR Riding Tent shows great promise for nomads on two wheels.

A 350-lumen bike light for $35? That is the promise with the handlebar-mounted Swift 350 from NiteRider. It is rechargeable via USB and will light the path or road adequately far ahead as you ride the night.

The OttoLock ($49) looks like a ratchet-strap found on an old pair of snowboard bindings. The stainless steel bands are reinforced with Kevlar then coated in durable plastic, which is resistant to bolt cutters. It’s much lighter and smaller than a normal U-lock, and it opens via a 3-digit combo. 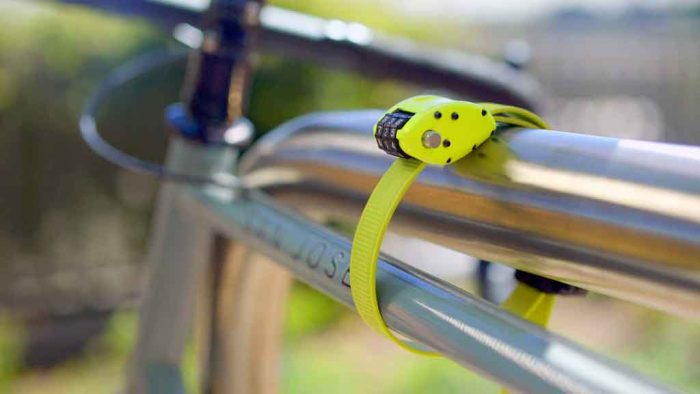 Off-road tourists, bikepackers, and fatbikers can all appreciate the Shimano PD-T8000 XT pedals ($100). They are dual-sided for use with SPD shoes or any flat-sole stomper. I liked the ultra-wide platform. It’s an XT-level pedal, which should mean years of worry-free service. 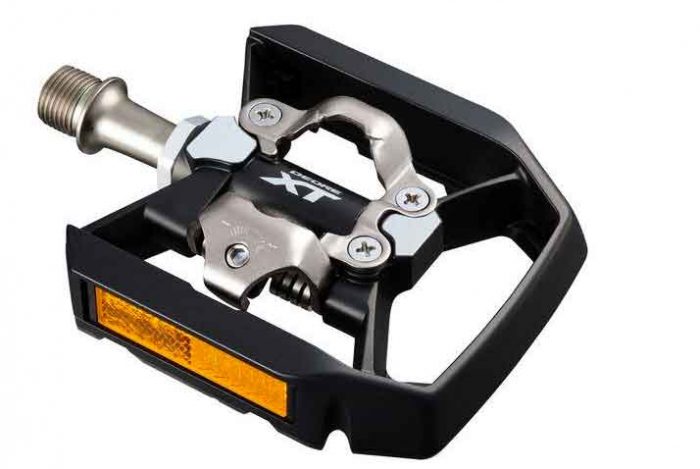 The MT stands for Mountain Touring, but this shoe would be a great commuter and every day shoe for urban cycling, too. I liked the simple hiking shoe style of the MT-300. Its less-rigid outsole and recessed cleat pocket means walking in comfort. 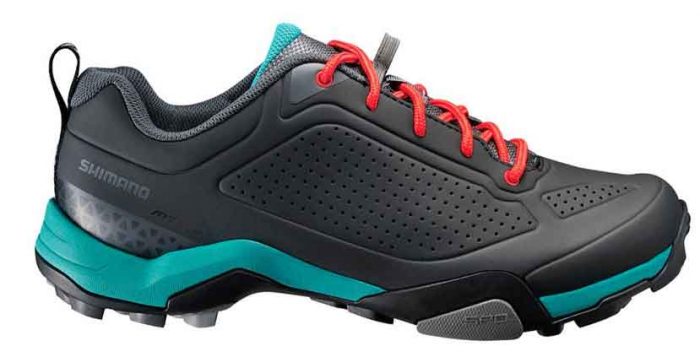 Car-rack brand RockyMounts gets into locks this year with a full line. The brand will offer 24 locks, including the stainless steel Compton model, which is impossible to ignore with its massive 18mm shackle and base. This thing weighs as much as a kettlebell and gives some serious peace of mind. 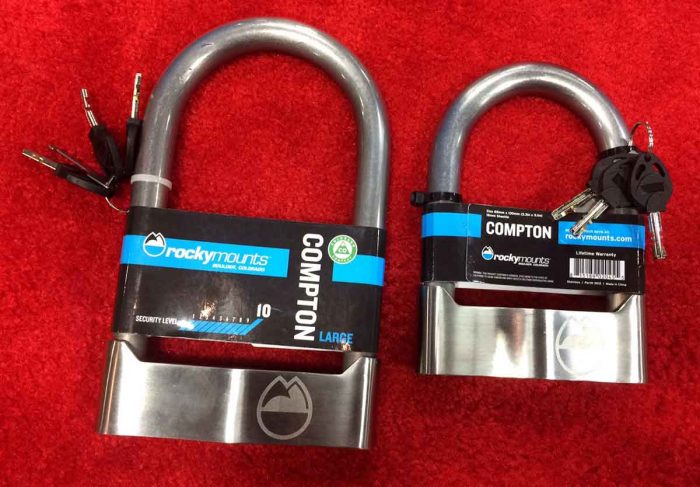 Many people want to listen to music while riding, and many people “need” to be connected to smartphones while on the go. The Coros ($199) does it all without any headphones. Instead, a “bone conduction transducer” uses two pods that essentially sit on the cheek bone and allow listeners to hear music (or a podcast, or incoming calls) without interfering with background (read: car) noise. I tried the helmet myself inside the expo. It works as stated. 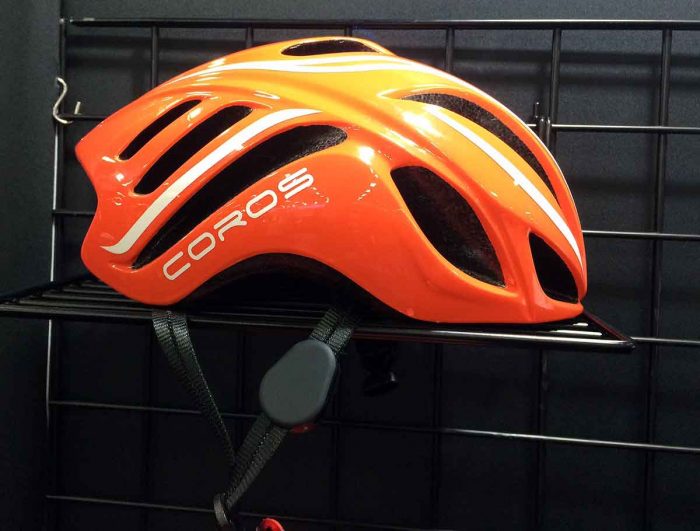 The goal of Giro’s designers with the race-ready Prolight Techlace shoe ($400) was to give the feel of laces but with on-the-fly adjustability. And at just 150 grams per shoe, that’s approximately 1/2 pound of mass removed from the feet when you launch that blistering attack on the Wednesday Night World Championship. As for me, I’ll stick with my mantra: look pro, go slow. 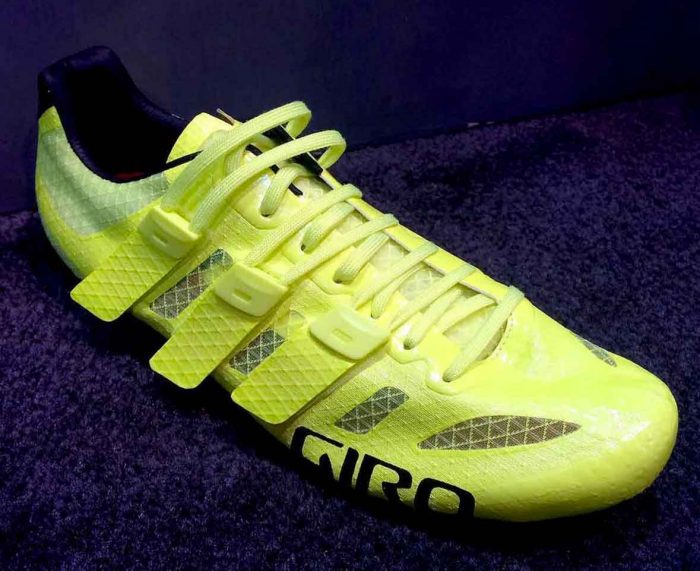 Showers Pass lured us to its Mandalay Bay suite with the promise of a free breakfast buffet and a peek at some new gear. Then the brand assaulted our retinas with the unveiling of its new Torch Jacket ($325), made from MapReflect fabric. 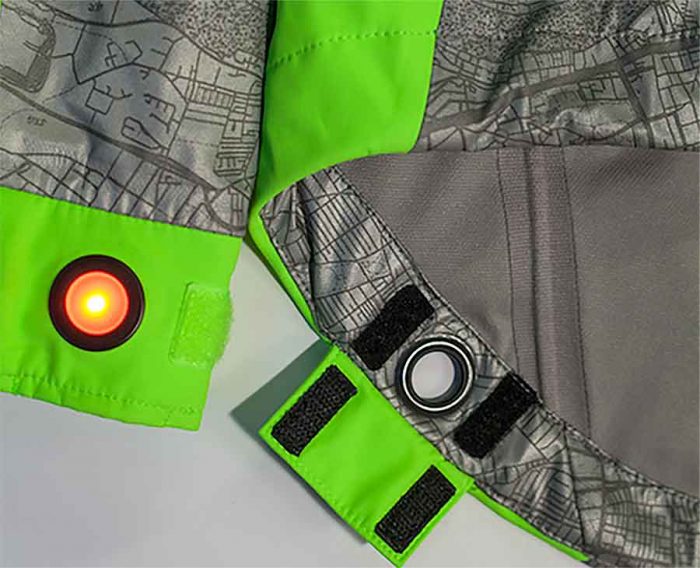 Commuters and anyone who rides before sun-up or after dark will be hard to miss; this thing is brighter than a thousand suns, and it lights up like a signal flare when any outside light source hits it. It’s also waterproof, stretchy, and the reflective fabric design shows the maps of 11 international cities known as bike-friendly. It has four replaceable LED red lights on the sleeve cuffs and the tail for extra pops of light.

The brand’s name, an Italian-Spanish mash-up, translates to “butterfly effect” and refers to small things leading to big changes. The Giustaforza II celebrates the brand’s 10th year with a simple, effective torque wrench. 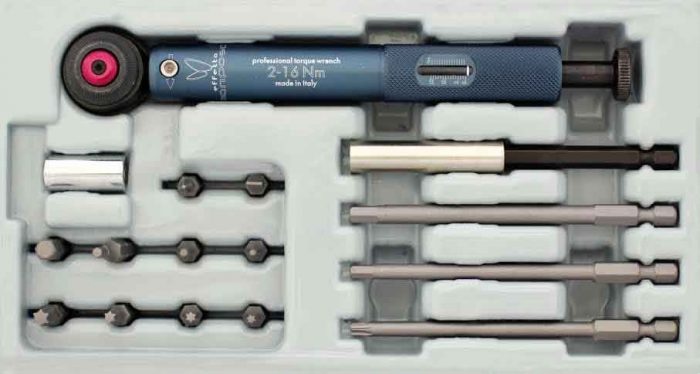 In the hand the Giustafoza II torque wrench ($249) feels like a precision instrument. It has a reversible, ratcheting head, is simple to operate, and will be in heavy rotation on my own personal fleet of bikes

Bike path commuters and cool kids alike should get a kick out of the Oi bell from Knog ($19). The clever design wraps around handlebars looking more like a bracelet, and is available in two sizes to fit nearly every handlebar on the market. I like that with its simplistic approach I will no longer have to alert my fellow rider with dulcet tones of “on your left.” 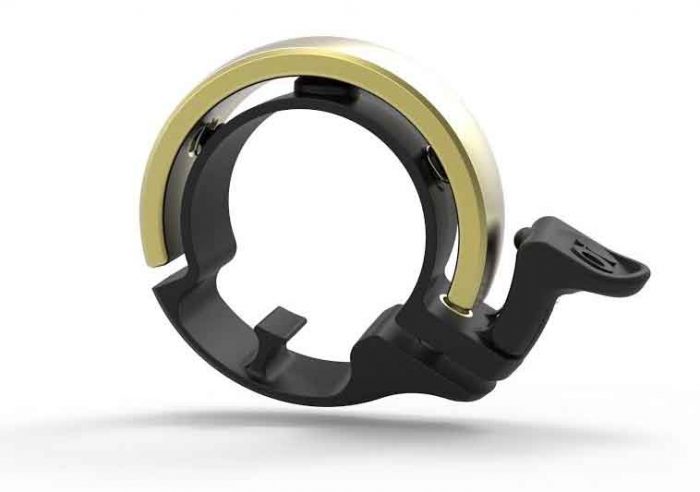 Home mechanics and race-day wrenches will appreciate this portable tool kit from Feedback Sports. Nineteen tools with 25 functions make up the kit ($249) and should cover all the bases. It comes enclosed in a travel case that hangs from a nylon loop, whether in the home shop or in the pits at a local cross race. 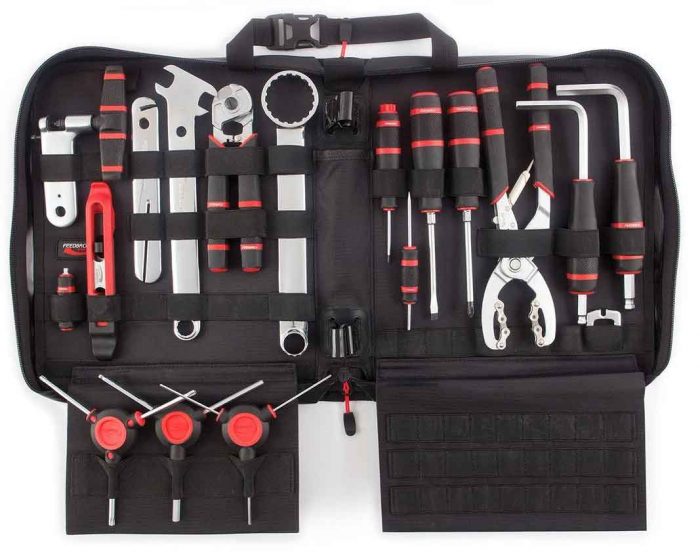 The tools handled at the show all had a proper heft and felt good in the hand, obvious nods to the professional race teams who had a part in the design. The off-set pedal wrench was especially notable; proper leverage can be achieved without it resembling a pipe-wrench.

Old-school roleurs with leather-sole cleats and modern art-school aesthetes will gravitate to this seat pack. The canvas seat roll is nearly as old as road cycling itself, but the Premio ($49) adds a twist by utilizing a hot-melt wax treatment for waterproofing then adds reflective thread to increase visibility. 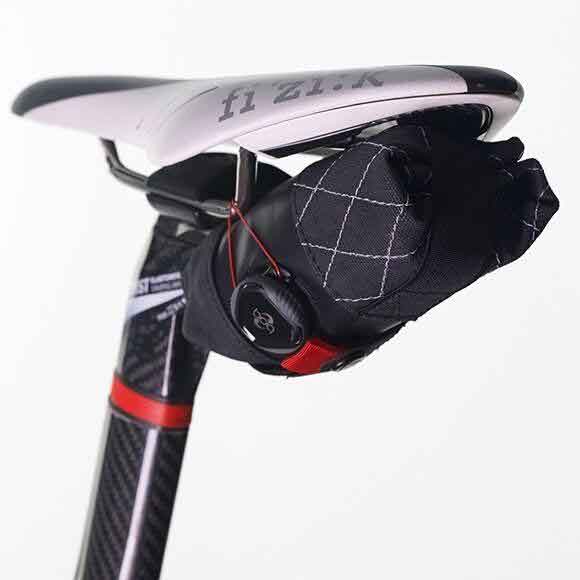 The whole works is set off with a Boa closure system, ensuring that the Premio stays connected to your seat’s rails. Like all SILCA products, it’s made in the USA.

The Fly 6[v] is the latest generation of Cycliq’s rear-facing action camera/tail lights. Users can record everything from close calls on a car-infested commute (for peace of mind should an incident arise) to high-speed single track power slides. 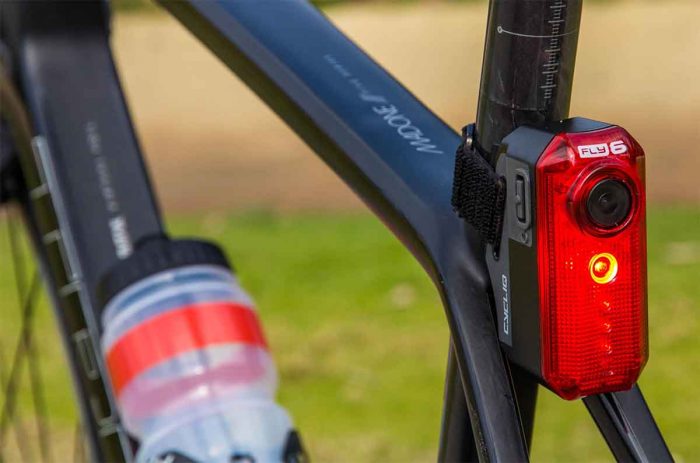 The company hopes one day cameras will be recognized as part of the bicycle landscape and all road users will just calm down. The $169 Fly 6[v] has 720p video, a six-hour battery life, and kicks out 30 lumens.

At 34 pounds, Yakima calls its 2017 DrTray the lightest two-bike rack in its class. It mounts on a trailer hitch and can carry road, mountain, and fat bikes. The trays are adjustable and after the bike is loaded, can be shifted from side-to-side (and front-to-back) for easier racking if handlebars and pedals get in the way.

Up Next: Did Diamondback Invent The World’s Fastest ‘Super Bike’?

Saving…
Did Diamondback Invent The World’s Fastest ‘Super Bike’?
Riding The Radweg: How To Tour Germany By Bike
×