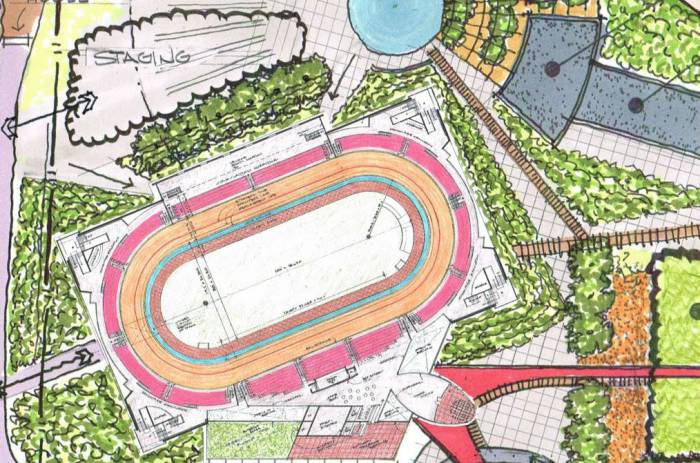 Go out to eat, shop, hit the gym, then enjoy a concert, all without leaving the confines of a massive cycling complex. A proposed project would make that concept a reality.

The $40-million Minnesota Cycling Center (MNCC) would span close to nine square blocks near downtown Minneapolis and, according to its advocates, be unlike anything in the country.

At the heart of the MNCC is a 200-meter wooden velodrome, the engine of a bike-centric community gathering spot. To become a reality, the state must pick up $25 million of the overall price tag, and organizers must land some major grants and sponsorships. More on this below.

The cycling center aims to grow the sport and leverage Minnesota’s notoriety as a top bike destination by targeting bikers and non-cyclists alike.

The planned facility would cover 120,000 square feet and include retail shops, indoor/outdoor dining, walk through green space, a museum, a skate park, and a 3,000-seat capacity concert venue.

“Our vision is really to be a community center and gathering spot with a velodrome in it,” said MNCC president Jason Lardy.

The Cycling Center claims it will house “the region’s most impressive athletic, meeting and entertainment facilities.” No mention of bikes in that statement. Maybe that’s because even in a cycling town like Minneapolis, bikes are still niche.

‘Unlike Anything Else In America’

The National Cycling Center is currently being constructed in Winston-Salem, Mass., with dorms, training equipment, and racing facilities geared to elite-level riders. At 42,000 square feet, it will be one-third the size of the proposed MNCC.

In addition to being indoors (only the Los Angeles velodrome has a full-facility roof), the MNCC could set itself apart from all other American velodrome destinations with its various entertainment options.

The MNCC also has its sights set on getting kids out of the classroom. The “STEAM” initiative (science technology, engineering, athletics, and math) would make it the only bike-specific organization to meet federal K-12 STEM educational standards.

“We will offer our curriculum through after-school programs, camps, and field trips,” said Lardy. “[It will] incorporate health and human performance, biology, physiology, math, and geometry, [and] the physics of riding the track” to comply with federal science, technology, engineering, and math (STEM) standards.

The “curriculum” has piloted in some Minneapolis schools, using the mechanics of cycling to illustrate math and engineering principles. To Lardy’s knowledge, an educational bike center “doesn’t exist anywhere else.”

Minnesota is currently home to one of the premiere track venues in the entire world – and almost nobody knows it. The outdoor 250-meter track was built to prepare Olympians for the ’96 Games and grow the sport of track racing in Minnesota.

Twenty-seven years since it was built, it remains the only strip wood track built in the traditional fashion in the country, and one of just a handful in the entire Western Hemisphere. It will retire in 2019 after more than a quarter century of harsh Minnesota weather.

But building a new facility is expensive, and advocates will be tasked with convincing the state legislature to approve about $25 million for the project. This will undoubtedly come with scrutiny and debate, however the project has already been supported by some legislators.

Funding for the project will be attached to a request for the 2018 bonding session, following a 2016 session when it failed to be heard for debate. The bill’s chief authors in the Minnesota House and Senate are Sen. Kari Dziedzic and Rep. Tim Sanders.

The $25 million ask is not insignificant, but in the 2016 session Gov. Mark Dayton requested $1.4 billion bond funding from the state.

The remaining portion of funding — about $15 million — will be split between grants, sponsorships, debt and private investment, Lardy confirmed.

To “fill the gap” before the current track is demolished, the MNCC needs to begin construction by fall 2018.

While track racing is undoubtedly niche, the MNCC’s mission to engage youth and build a community around cycling is a lofty vision we’d like to become a reality.