Orbea’s Oiz update produces a tight, snappy racer with a suspension that can handle rougher trails than many XC race bikes.

Orbea updated the Oiz for 2021, making the already World Cup-capable bike even lighter and race-ier. But its top-tier race bike maintained trail-worthy usability, including the capacity for two water bottles and 120 mm of travel in the front and rear.

We tested the Oiz M Team for 5 months on mostly singletrack trails composed of hardpacked, clay-based soils, with plenty of embedded and loose limestone boulders ranging from the size of golf balls to basketballs.

The rolling terrain has plenty of short ledges and an unbelievable amount of turns crammed into small areas. These collections of turns are connected by super fast and flowy sections.

In short: The Orbea Oiz M Team is a race bike at heart, but it can stretch its legs for trail missions. If you prefer the snappy and featherlight feel of a race bike for hammering faster trails, the Oiz may be the weapon of choice.

The Oiz was already a standout full-suspension race bike, but Orbea applied significant updates for 2021. The frame shed 250 g with a new OMX carbon layup.

Additionally, the carbon sheets are laser-cut to reduce excess material, and the updated molds and inserts smooth out the resin internally to minimize its use.

And the flat-mount for the disc brake is new, further reducing material and moving the flex point down (which Orbea claims improves suspension action). 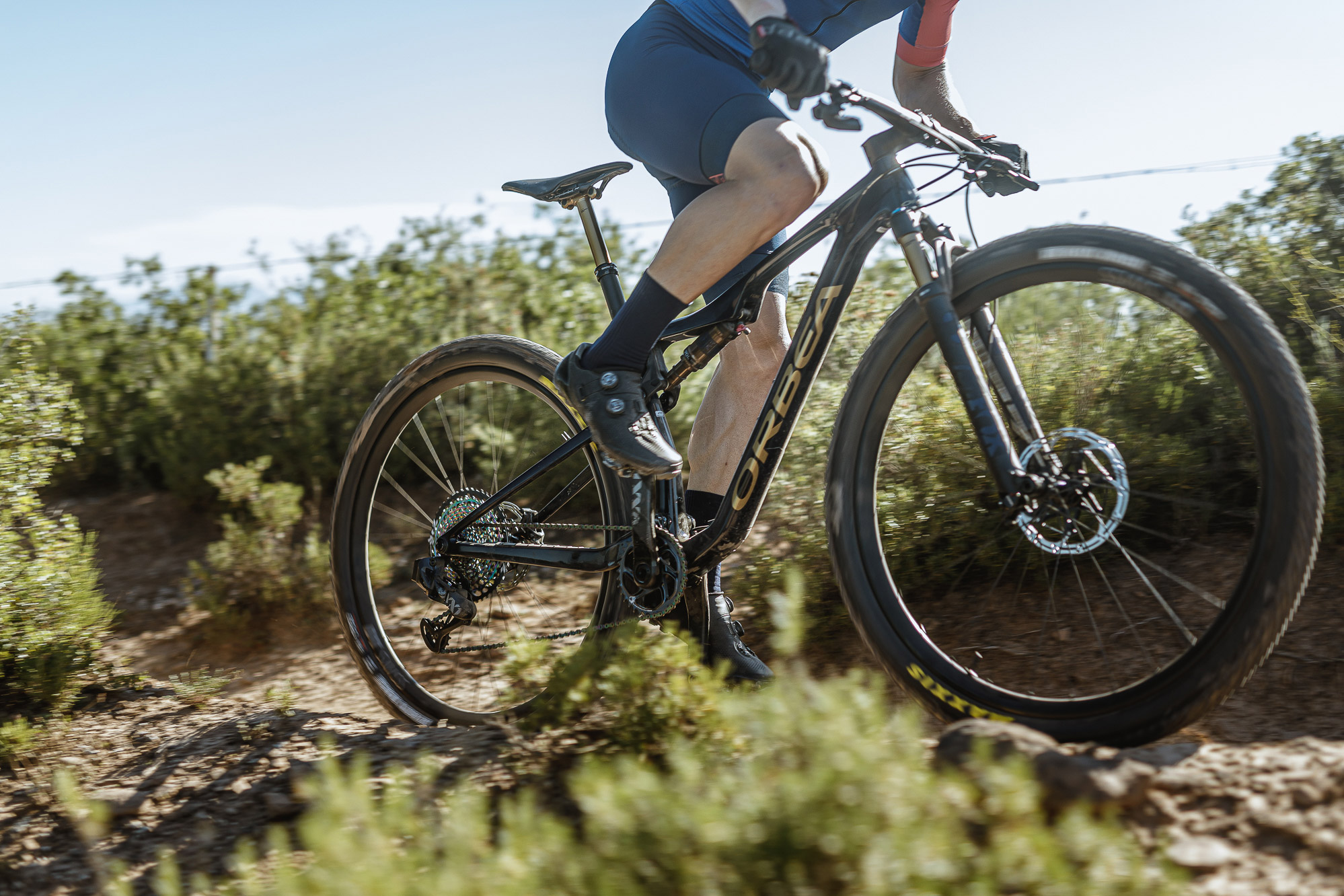 Orbea claims that the new OMX Oiz medium frame weighs 1,740 g — with shocks! That’s an astonishing figure. For reference, the Specialized S-Works Epic frame tips the scales at 1,869 g, and the Trek Supercaliber comes in at 1,933 g with shocks.

The Orbea Oiz Team M has the high-level spec based around the hard-to-fault Shimano XTR component package: 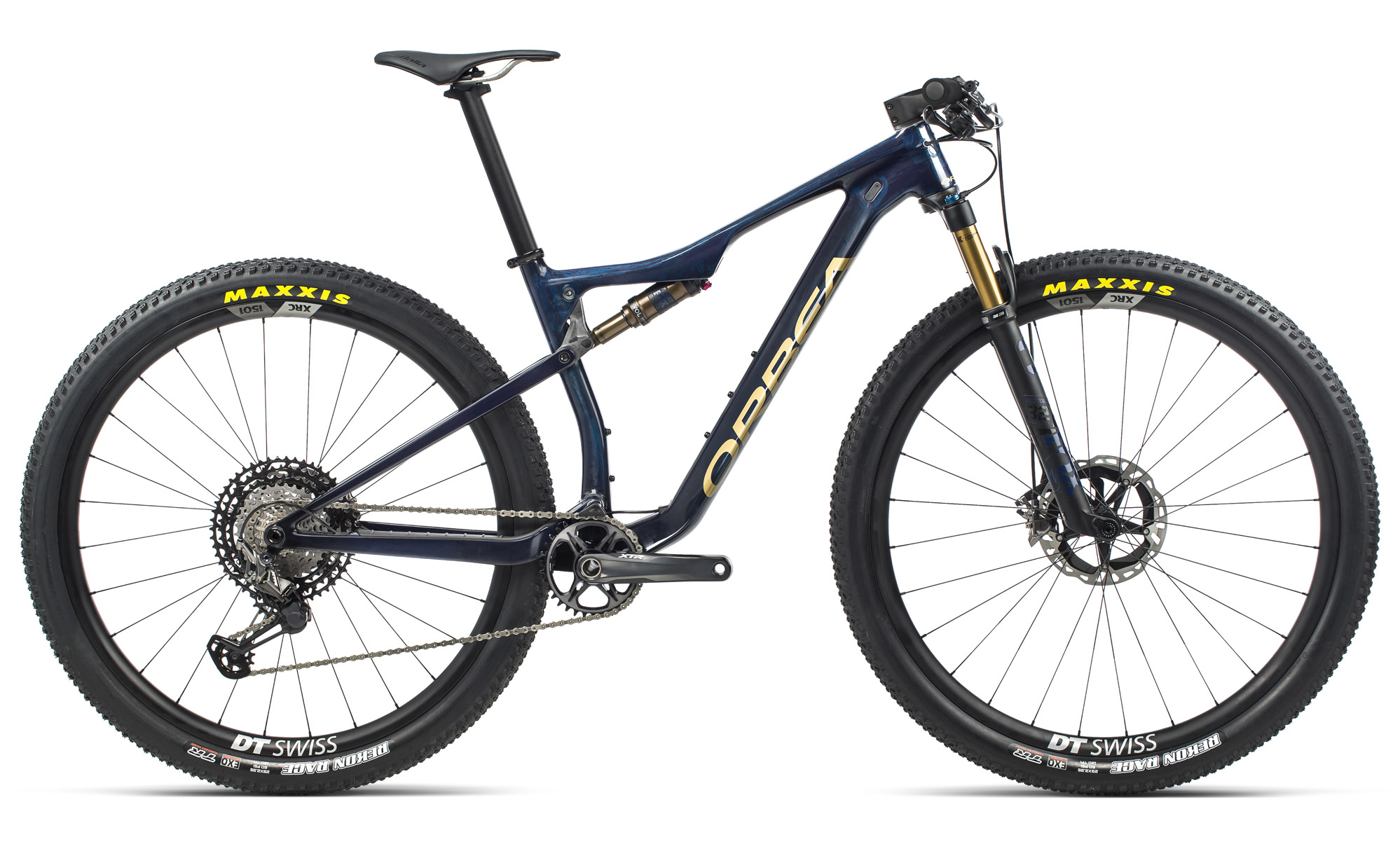 Our Oiz Team M had an MSRP of $7,499 and a verified weight of 22 pounds 8 ounces for a size L, as shipped with tubes installed.

Customers can customize the Oiz OMX models through Orbea’s MyO program with a dizzying array of paint and part upgrades and options. Unlike other custom programs, the paint options are free. Our tester had custom MyO paint.

Our Orbea Oiz M Team sits one down from the highest spec OMX version, which gets SRAM Eagle AXS electronic shifting. Then below sit the OMR carbon frame versions, and Hydro aluminum frame versions are the lowest in the Oiz hierarchy.

There is also a trail version of this bike, which bumps travel up to 120 mm front and rear.

I set up the fork and shock at the manufacturer’s recommended settings for my roughly 170-pound rider weight. That meant 150 psi in the shock for 20% sag, rebound at nine out, and 70 psi in the fork for 15% sag with the rebound at 11 out.

For an XC Race bike that weighs in the low 20s, the Oiz M Team had outstanding suspension characteristics, partly due to the Orbea-designed OC Squidlock. The fork and shock remote are minimalist and clean, with three settings: Open, with both shock and fork open; Medium, with fork open and increased compression damping on the shock; and Firm, where both fork and shock are locked out.

The Squidlock did require getting used to — pressing the levers unlocks the fork and shock, meaning the resting position is firm, the opposite of many remotes. I was frustrated for a few weeks, but once I stopped riding other bikes, the Squidlock became my favorite remote.

One reason is that the Medium setting kept the fork wide open, which I preferred over increasing the damping for both shock and fork. And because pulling the cables via the levers opens the suspension instead of closing it, the lever feel was light. 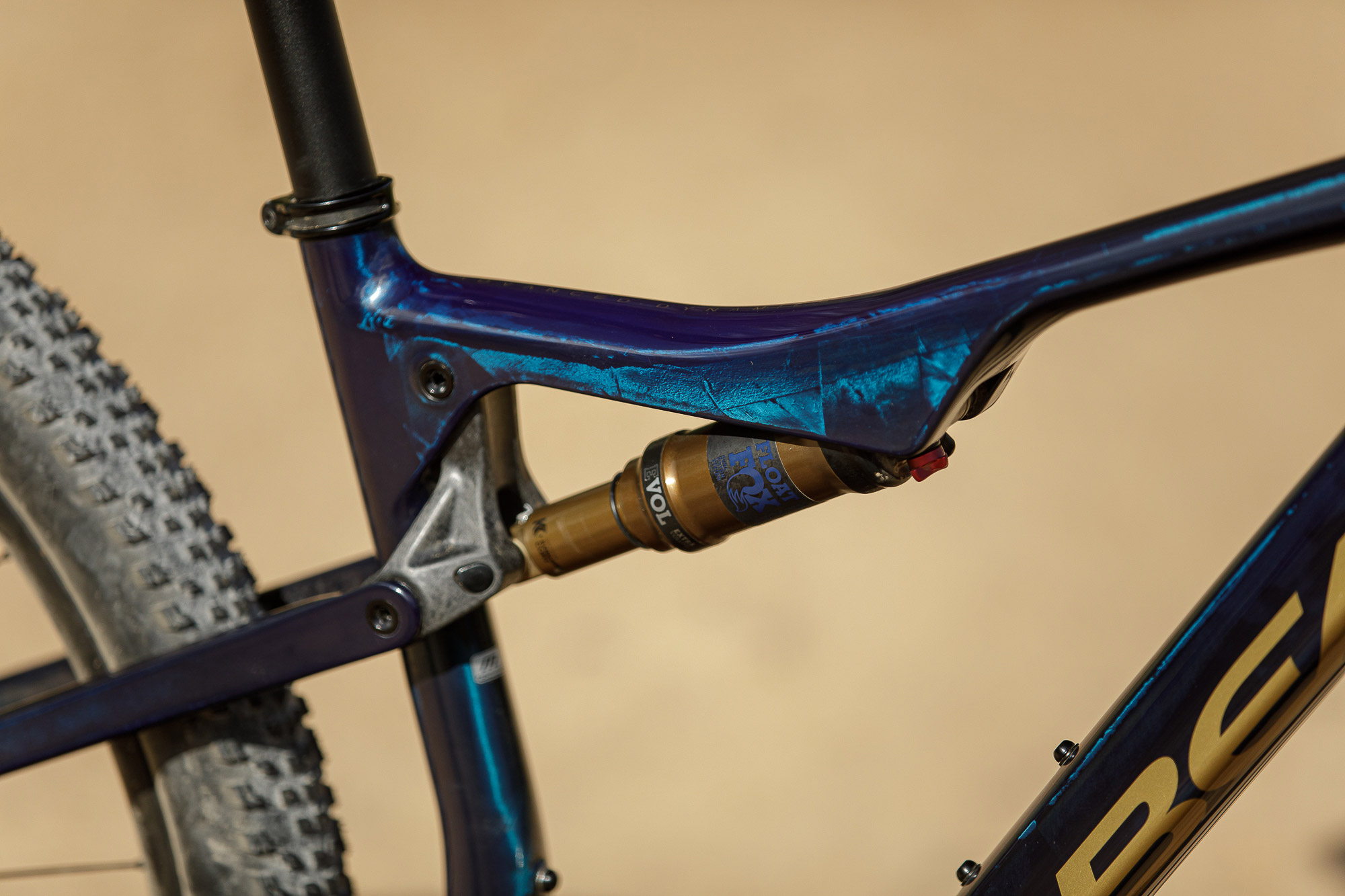 Because the fork was open in the Medium setting, I started riding in that configuration often, producing the efficient pedaling feel and sharp handling I preferred. And I still had a quick option for plusher suspension travel when required. I did lower the pressure in the shock by 5-8 psi and added one click of rebound damping to make this Medium setting more usable.

The anti-squat on the Oiz frame felt very pronounced and forced the suspension high into the stroke while pedaling, more so than on other CX bikes I was testing at the same time. This aggressive anti-squat kept the steering quick and gave the chassis a consistent and efficient pedaling feel.

It also lessened pedal clipping. But when descending without torque on the chain, the suspension worked remarkably well in Open mode for only offering 100 mm of travel. And it still felt stable for such a quick-steering bike. I attributed much of that to the low bottom bracket height and the 44mm fork offset.

And man, did the Orbea Oiz M Team turn when on the gas like it was on rails — this bike pivoted around the steering axis so well. I could initiate a turn through the bars, and the front tire would go exactly where I wanted it to go while the rear wheel tracked tightly in its wake. It reminded me of how my favorite dirtbikes turn.

Other Favorite Things About the Orbea Oiz M Team

The Orbea Oiz M Team is super light. I felt that everywhere, and it’s my preferred feeling when on the hardpacked, rocky trails of my area.

My usual haunts may have a few ledges up to 2 feet tall. But for the most part, I’m dodging or rambling over softball- to basketball-sized boulders partly embedded in clay-based soils at a good clip. In this terrain, the Oiz M Team was an absolute joy to ride fast and flick about. For me, a lot of this joy was the ease of changing momentum on this light rig.

I must give kudos to the wheel-and-tire combination on the Oiz M Team. At first, the tires seemed big for a pure race bike, but 100 yards into my first ride, I was so glad to have that amount of meat on the ground and the tire pressure leeway offered by the larger air volume. The knob pattern worked exceptionally well for the hard dirt and abundant stone of Central Texas. 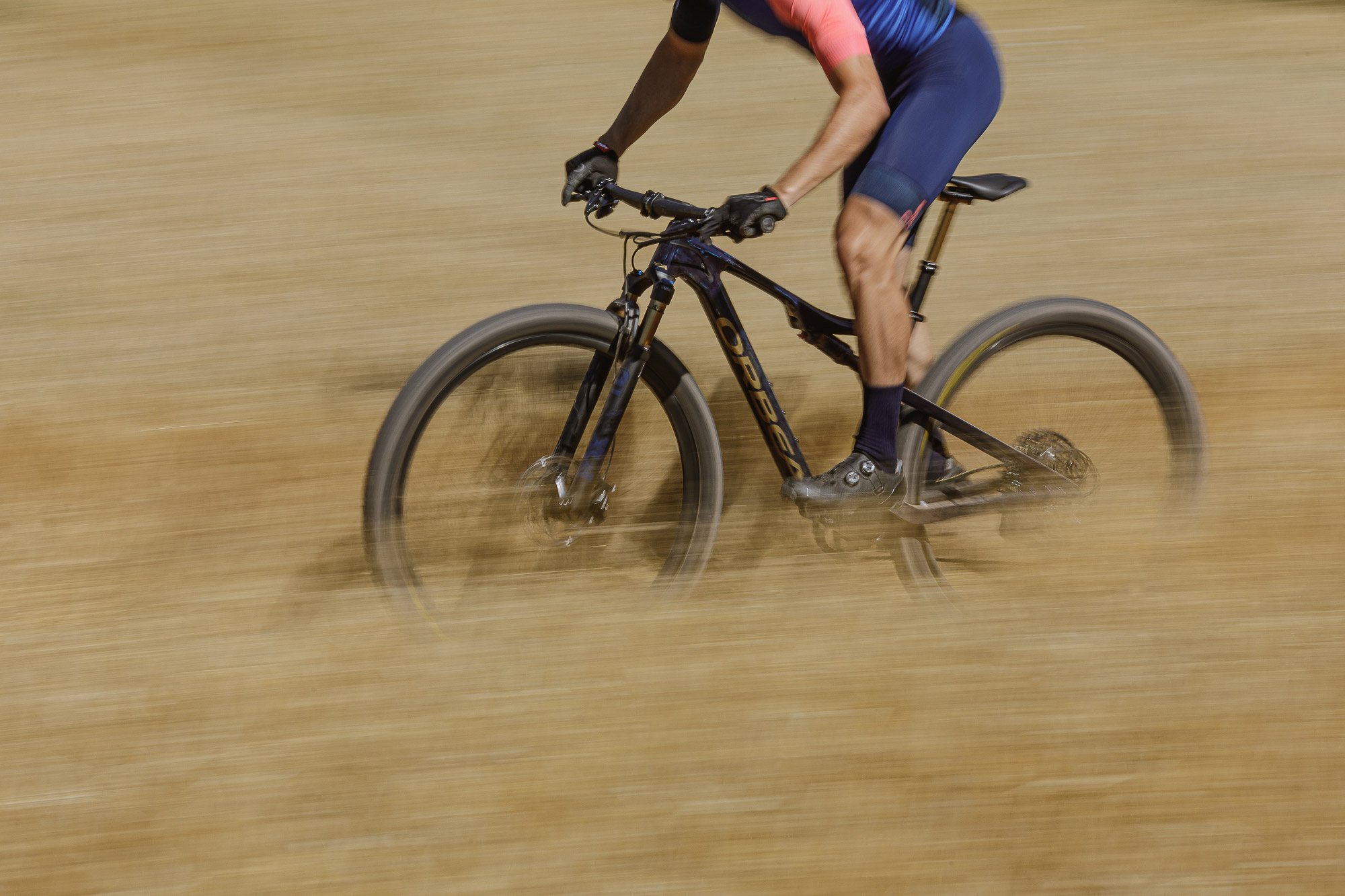 And although the DT wheel spec seems popular and almost generic, the wheels felt tight and lively, and they never needed tweaking no matter how many square edges I hit.

I also loved the understated custom Orbea MyO custom paint color and the clean lines afforded by the internal routing of cables and hoses. There seemed to be some excess cable and hose hanging off the bike’s front, but everyone commented on how aesthetically svelte the entire package looked.

And, I admit, it was nice to be on a bike that nobody else had. Orbea hasn’t penetrated the market in my area, and I never saw another Orbea mountain bike during the entire 5-month testing period.

What I Would Change on the Oiz M Team

Not much! The component spec was hard to fault, and everything worked well together. I can usually pick out one or two things that I would change immediately if the bike were mine, but it took me a long time to think of anything on the Oiz M Team.

And the only things that came up were easily mitigated. I would take the weight penalty and add a dropper post to increase the capability and fun factor, easily done via the Orbea MyO program. (A dropper post comes on the trail version … hmmm). And I would trim a bit off the 760mm-wide bars, which is just personal preference. 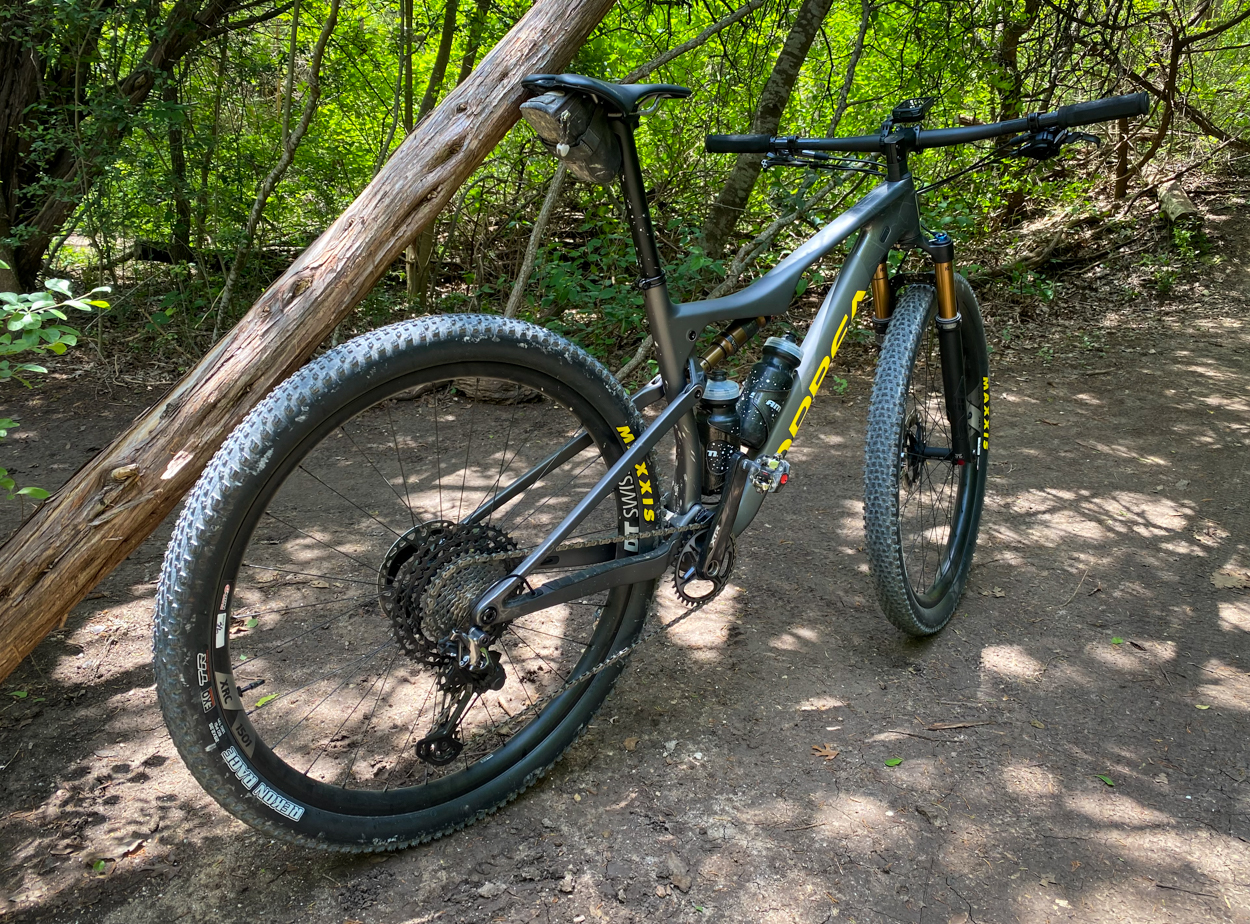 Suppose you prefer the light, flickable, and efficient feel of a CX race bike but yearn for more suspension capacity than other bikes in the category offer. In that case, the Orbea Oiz M Team is worthy of consideration.

The suspension design efficiently transfers pedaling energy to the rear wheel and is easily triggered via the Squidlock, delivering far more than expected from a 100mm-travel race bike.

As a tester, I rarely buy personal bikes. But I asked Orbea if I could purchase the media sample of the Oiz M Team once it had made its rounds. I can’t remember the last time I made this request — that’s how good an impression this bike made on me.

Saving…
The Best Fat Tire Bikes of 2022
Mountain Biking Moab Solo: How to Ride the ‘Whole Enchilada’ Trail by Yourself
×