Startup bike brand Otso blurs the line between plus-size and fat. The company’s modular design converts from 26-inch wheels with fat tires up to 29+ wheels to become a ripping trail bike. 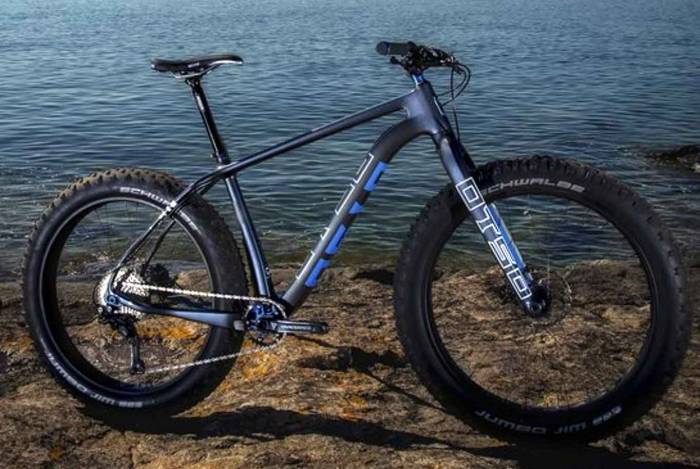 The Otso (say “Aht-so”) Voytek is two bikes in one: a fat bike and a mountain bike. What makes it exceptional is that, in fat bike form, it’s the best on the market right now.

It feels like a mountain bike, not a fat bike — this is a good thing. Otso stakes this claim, and we found it true. The just-launched company offers the narrowest Q-factor (more on this below) of any production fat bike and has an innovative dropout to make it adjustable for winter riding or summer singletrack.

We’ve been on the Otso Voytek for a few months now, riding one of the first pre-production samples here in Minneapolis, Minn., where the bikes are designed and built. We’ve pedaled hundreds of miles on the bike, in both of its forms. Below you’ll find an exclusive in-depth review.

The Otso Voytek is one of the most unique bikes we have seen recently. It’s a carbon fiber hardtail built for riders who want high performance and good value, transforming between two setups: mountain bike and fat bike. That versatility usually brings compromise, but not here.

Otso Is A New Brand 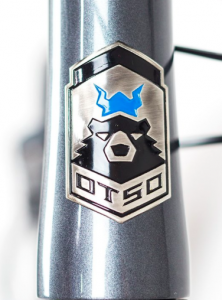 The Otso Voytek is not just a new bike; Otso is a new brand. But the creators have experience as founders of Wolftooth Components, a high quality, made-in-the-U.S.A. bike component company. By bringing unique ideas to life with top-notch engineering they are poised to shake up the bike industry.

Voytek (slavic for “he who enjoys war”) was a 1,100-pound cigarette and alcohol fueled bear who was officially enlisted as a member of the Polish Army during WWII. He was well loved and a statue of him exists today. The bike is not nearly as unruly as the bear. Everything about the Voytek is more like a normal (high-end) mountain bike than any other fat bike we’ve ridden. Here’s a look at the engineering that made it happen.

“Q factor,” in short, is the width of cranks. It dictates the width of feet while pedaling. Too wide, and you’ll pedal like a duck waddling — Quack. Hence the name, Q factor. If you don’t believe me, google it.

Generally, fat bike Q factors are wide (over 200mm). Studies show the ideal median width is around 150mm, which will both reduce knee injury and increase pedaling efficiency. The theory is that your feet width should not be too different from the width of your feet during walking, which is around 130mm for most people.

Bike fitters and experienced riders pay a lot of attention to crankarm length (typical range 165-180mm), so the almost complete disregard for optimization in Q Factor over a much wider range (144-200mm) is an oversight, in our opinion.

Of course cycling is different than walking, and ideal Q factor for each rider depends on width of pelvic girdle and other variables. But the bottom line is that bikes with fat tires are wider than they should be. Narrow is better for both optimal power and injury prevention.

How Did Otso Fix The Problem?

In short, they knew some guys who could made custom chainrings. Otso has at its disposal all of the machinery and technology of Wolftooth Components, allowing the brand to adjust the chain line for different needs..

They built a special front chain-ring that dished the chainline out wide enough to clear fat tires (up to 4.6 inches). That is the main secret, but they also designed the frame out of carbon fiber with tall, narrow chain stays, which allow room for bigger tires.

The Voytek’s Q, at 183mm wide, is still a touch wider than most mountain bikes, but only by 10mm. Other fat bikes on the market are 30-50mm wider than the Voytek.

Though our favorite aspect of the bike is its narrow Q, most people will tell you that the tuning chip is the new bikes’ most unique technology.

The Voytek was designed to be two bikes. The tuning “chip” (think of it as a metal plate) is what makes this possible. It is essentially a way to adjust the axle position in the dropout.

The idea of changing the location of the rear axle is not entirely new, it’s been seen on other bikes. But the Voytek does it better because it’s easier and it also aligns the rear disc brake automatically, so your brakes work every time without any tinkering.

The tuning chip shifts the rear axle position diagonally between three positions. Generally, a longer bike is better for fat and winter biking due to increased tire clearance and increased stability from the long wheelbase.

Conversely, a short wheelbase makes the mountain bike form turn sharper. It also makes acceleration and handling marginally snappier.  Further, when the axle is moved fore or aft, the bottom bracket gets raised or lowered. This up and down movement also slightly changes the angle of the front fork, which is intentional. So, the diagonal movement “tunes” the ride to each of the Voytek’s two intended setups.

The change between positions takes five minutes the first time, and probably less than two minutes after you learn what you are doing. The tuning chip simply pops outward with a finger push behind it, and then is put back into position by flipping it, or replacing it with the “goldilocks” chip.

This bike is good. It immediately felt fun and seemed to get better once we got to know it.

It starts with an excellent front end. The Voytek’s front fork was designed by Otso, specific to this bike. It works with the Voytek’s massive downtube to provide the most predictable and best braking fat bike front end we’ve ridden. It is not flexy or unpredictable. (We’re looking at you Borealis Yampa.)

The steering and braking forces of a fat or plus-sized tire require a lot of fork strength, and this one can even handle summer terrain. Some other bikes handle like they were designed only to be ridden in forgiving snow. 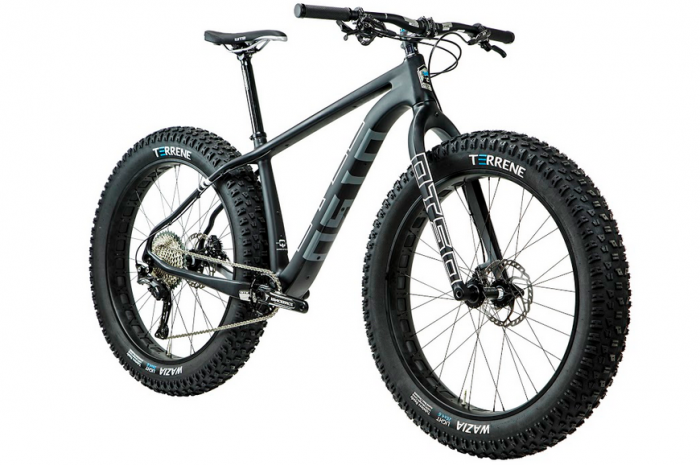 The geometry is modern, on par with other bikes at the front edge of frame design. Some plus-bikes we’ve tested are still figuring it out (see our Framed Marquette review) but this one is right. The front end is slack, but the “trail” measurement makes the handling feel good. The back end of the bike has super short 430mm stays.

These are the shortest fat bike stays on the market right now. This means it rides well, even in the summer.

In mountain bike form its plus-size 2.8 inch tires combine with modern geometry to carry huge speed through turns and descents. Both free riders and racers will like the increased speed through the twists and turns on the Voytek’s plus-sized tires. It takes a while to train your brain to trust the big tires, but if you trust them, they can fly.

The bike is not the lightest fat-bike on the market, but it’s not far from it. Medium frames are under 1400 grams and I’m not aware of any fat bike in the world more than 100 grams (less than a quarter pound) lighter.

It could even be raced, but ideally not with the stock wheels. You’d need to spend the big money on carbon hoops to avoid spinning up the fairly cumbersome stock wheels.

This the main drawback of “plus-sized” bikes: the rotating weight of the wheels is much heavier than a normal mountain bike. With that said, depending on the course and terrain, this bike can be the fastest mountain bike at a race right now.

This is one of the most exiting bikes we’ve reviewed in the last few years. Its engineering is excellent, and good design translates into a bike that is fast, fun, modern, versatile, and just plain rips.

Still, it’s not going to make you into a new rider, at least in stock form. After all it’s a hard tail and it costs about $4,000. It’s not like the a new Trek Madone or a Pivot 429SL with electronic shifting and a dropper post. Those bikes allow you to transcend your mortal body and be reborn as a different rider.

But the Voytek is versatile and very good in each form. It’s great out of the box, and a couple sets of nice wheels will enhance performance. You’ll be staring down the barrel of at least $6,000 if you get all the bells and whistles, but on this bike we dare say it’s worth it.

Hats off to the crew at Otso for introducing a ripper of a bike.

–See the full specs and more info on Otso.

Up Next: Citing ‘Brutal Truths,’ REI Reboots On Bikes