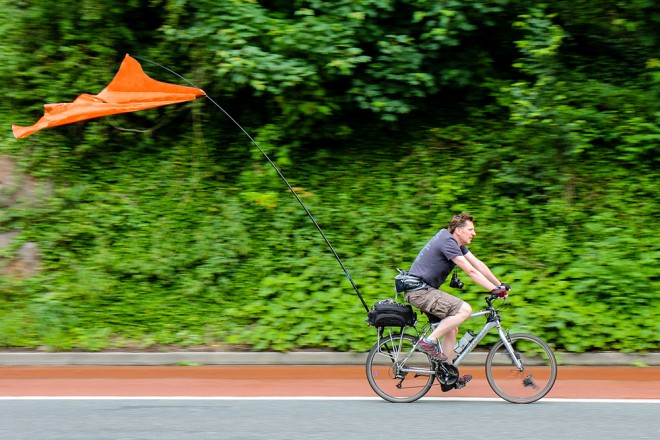 [leadin]If passed, Missouri House Bill 2046 would require “every bicycle operating on a lettered county road to be equipped with a fluorescent orange flag visible from the rear and suspended at least 15 feet above the roadway.”[/leadin] 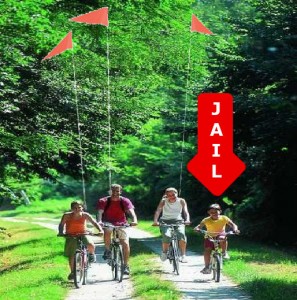 On January 6 of this year, the Missouri state legislature took an unprecedented step toward making 20,000 miles of roads safer for all cyclists – the introduction of House Bill 2046.

Despite the best efforts of the bill’s author (Republican Representative Jay Houghton, who can be emailed here with feedback on the proposal) to make the streets a haven for safety-minded riders, diehard cyclists of the old guard are rallying against this “common sense” proposal for bike-friendly streets.

Response from the public and the media have been critical, deriding the proposal as a thinly veiled attempt to dissuade would-be bikers from ever commuting by bike. The nearly century-old network of farm-to-market rural roads are the primary arteries for many exurbs between homes, churches, schools, and shopping areas. According to the critics, flying a measly five-yard-long cable with a neon flap dangling on it is not just overkill – it’s stupid.

Not only is this idea entirely not stupid, it is in fact totally radical!

If you don’t think a flapping flag that’s visible from a second-story window sticking out of the back of your ride looks cool, then you really don’t understand what cool is. And lest we forget the safety element – what could possibly do more to protect cyclists than a 15-foot-high flag on a stick that waves around like a warning beacon screaming, “Hey, Goober! Look down 15 feet, there’s a bike or something down here!”

But in the interests of democracy, let’s address the concerns of the “Big Bike” lobby one by one:

It’s simply impossible to keep up with what does or does not look hip these days; it seems like every minute something else is trending. You know what, some things are timeless: top hats, the jitterbug, and ritual sacrifice to name just a few. And topping that list is flags; countries have flags, cities have flags, even America’s 51st state, the moon, has a flag on it. Before you know it, everyone is going to have their own flag – cyclists have the opportunity to be on the cutting edge of the “Hey look at me, look right here!” revolution.

And frankly, who’s to say flags won’t be cool in 10 years? Virtually everyone wears bike helmets now (in America) and those used to feel like strapping a 10-gallon Styrofoam beer cooler on your head. Today, it’s both stylish and functional. In time, so too will be the 15-foot-high flag on a stick.

It’s Dangerous, What About Power Lines Or Lightning?

It’s a proven (fictional) fact that all superpowers are the result of a) aliens; b) radiation; or c) electricity. If, heaven forbid, someone was to be struck by lightning while riding their bike with a 15-foot-high flag on a stick, it stands to reason that he or she would regain consciousness in a nearby ditch with the ability to speak to derailleurs, true wheels with their mind, or shoot bar tape out of their eyes.

Obviously, safety is the number one concern here. If you’re not willing to risk electrocuting yourself so that a passing motorist can spot you a mile-and-a-half away, then maybe safety isn’t really that important to you. Unless you want to use a bike light, which is way more effective or practical – but that has zero chance of giving you any superpowers.

No One Can See The Little Flag – Isn’t It For Kids?!

It’s a fair point: That little orange triangle basically serves to alert everyone around that whatever is at the other end of this stick is a doof. Those flags are usually reserved for riders who are one excuse away from buying a Segway and abandoning their pedals for good.

Fear not would-be flag danglers—nowhere in this proposed bill does it state exactly what type of flag needs to be waving from that 15-foot-high stick, only that it’s “fluorescent orange in color.” What’s more, nowhere does it say you can’t fly all sorts of other stuff from the sweet new lightning rod jutting out of your frame. You can decide what to run up the flagpole when you hop in the saddle – the Jolly Roger, wind chimes, your shorts, that flame-throwing guitar guy from Mad Max, anything goes!

And what about the 800-pound gorilla in the room: sponsorship. It’s a fair bet Home Depot would love to sponsor some commuters to fly their bright orange logo around town, and who couldn’t use a little extra spending cash for selling out? At this point, as long as there is a 15-foot-high stick with an orange thing flapping on the end, you’re a responsible, law-abiding cyclist.

Bridges, Awnings, Bringing It Inside?

This question is bound to get tossed around by the tiny percentage of cyclists who don’t park their bikes in a barn or frequent bike shops that work out of airline hangars. Everyone needs to get with the times – the future of bicycling is flags, 15-foot-high flags on a stick.

If cyclists demand 36 inches for a car to pass them, the least local establishments and building planners can do is allow fifteen vertical feet to accommodate this kind of common sense social progress. Obviously, this will entail basic measures like erecting bike cathedrals for all indoor parking and retail business, and retrofitting every bridge and overpass that is not at least 15 feet high – a potentially sizable undertaking as the current federal minimum is 14 feet.