From dun-colored wool to eye-searing Lycra, cycling apparel has seen a significant evolution. But how did we get here?

Road cycling has grown significantly since U.S. riders started competing for — and winning — Tour de France titles. Even the sport’s scandal adds to its popularity. And now, high-end cycling gear, from full-carbon bicycles to brand-emblazoned jerseys, has trickled down to the masses.

And best of all, splashy art decorates each section. 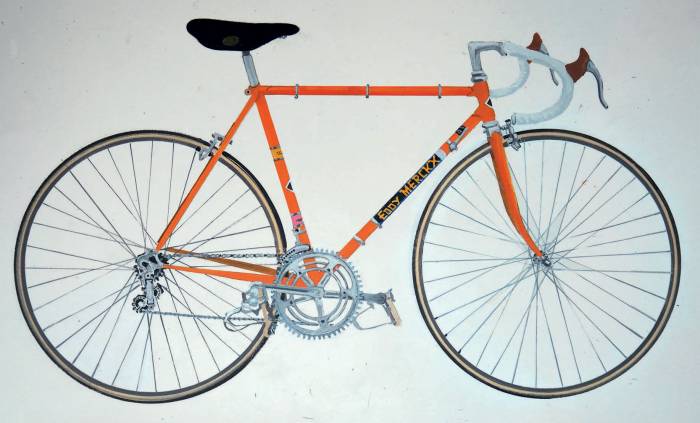 The following excerpt follows the history of cycling wear from its unassuming beginnings to the ostentatious outfits of today.

Racing Bicycles: The Illustrated Story of Road Cycling, by Nick Higgins, is excerpted below with permission of the author and Laurence King Publishing. All rights reserved.

Maillots: Cycling Apparel, Past and Present

Early racing was conducted in tweeds and wool, with flying helmets and goggles. There was little difference in costume between cyclists and early aviators. But in 1910, Alfredo Binda was dressed by the tailor Vittore Gianni, who invented a dedicated cycling kit. 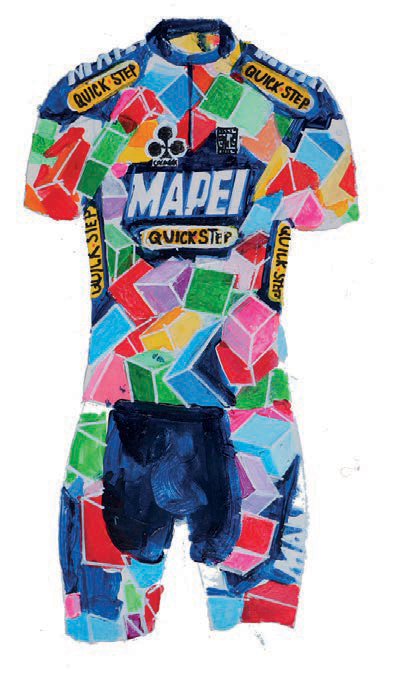 Jerseys were long sleeved, with buttons across the shoulder and a pocket on the chest. In the 1940s, Fausto Coppi’s personal tailor, Armando Castelli, introduced silk. As well as considerations of comfort and practicality, silk was better able to accept being printed with ink, which would become increasingly important as advertising increased.

Synthetics began to challenge wool in the late 1940s but were resisted by many. In 1947, Louis “Louison” Bobet handed back his yellow jersey, rejecting its synthetic fibers — an awkward moment for the race organizers, since the jersey was actually sponsored by Sofil, the makers of the acrylic yarn.

Wool persisted right through the 1960s. The idea of climbing alpine stages wearing wool in August gives some idea of just how much suffering professional bike riders can endure. Towards the end of the 1960s, the broad chest pocket, which never appeared to contain anything anyway, finally vanished, leaving the familiar three rear pockets as the standard.

In 1977, Maurizio Castelli, Armando’s son, pioneered what was probably the most noticeable innovation to the sport since the pneumatic tire: a woven polyurethane-polyurea copolymer fabric, marketed as “Lycra.” Again, performance went hand in hand with promotion as he developed a special dye process to better accept its own branding. In 1981 he broke the ban on anything but black shorts, and in 1996 he debuted the skinsuit.

The last piece of natural fabric was dropped from the peloton in 1977 when the chamois leather pad was removed from the shorts to be replaced by “technical” materials.

Cycling often takes on the appearance of an uncontrolled binge of branding and graphic exuberance. As teams replaced the individual, the logos of bicycle manufacturers started to appear on their chests: Hyalite, Elvish, Alcyon, Hutchinson, Automoto. The logo at this point, though, was strictly relevant to the event.

In 1954, Nivea paid Fiorenzo Magni to wear a shirt branded with their logo — an unlikely association, Fiorenzo not being a conventional model for beauty products. (There was, however, a compelling connection between the product and the sport: It was used to soften the chamois leather in the shorts.) The link, nevertheless, between the sport and what was written across the chest (back, shoulders, thighs, ankles, and head) had been broken, and a spectacle of attention-stealing graphic exhibitionism was unleashed as the kit became an all-over branded suit, with matching mail-lots, mitts, caps, capes, and booties.

The vivid competition for prominence on the backs of the riders has led to some remarkable kit, bringing a psychedelic quality to the peloton and exploiting the most vivid and fluorescent spectrums of print technology.

Team Mapei — sponsored by an Italian grout and tile adhesive maker — impressed through the 1990s in remarkable harlequin-like geometry, while the jeans manufacturer Carrera’s literal stance, with a faux denim kit, was possibly a low point in branding.

There are two simple rules now: White Lycra shorts are never a good idea, and kit can never be too loud. Multiple sponsors fight for space on one shirt in a vivid confusion of branding. Niche marketing can even put a logo into an armpit.

Teams have been serially rebranded as the burden of financing them is passed on: Peugeot, for instance, became Z, which in turn became Crédit Agricole. In most cases, while instantly recognizable to fans, the activity of the sponsor is entirely forgotten. Banks, supermarkets, ice cream, pens, cable TV stations, builders’ merchants, and sausage suppliers leave a mark, but in many cases, while the name is remembered, what they do was never known.

Up Next: GT Redesigns Force, Sensor Mountain Bikes for Customization