Double forks spanning wheels with more than 9 inches of furiously-treaded rubber (plus a 2,000-watt motor on the frame) make the Rungu Juggernaut the world’s weirdest, wildest fat bike. 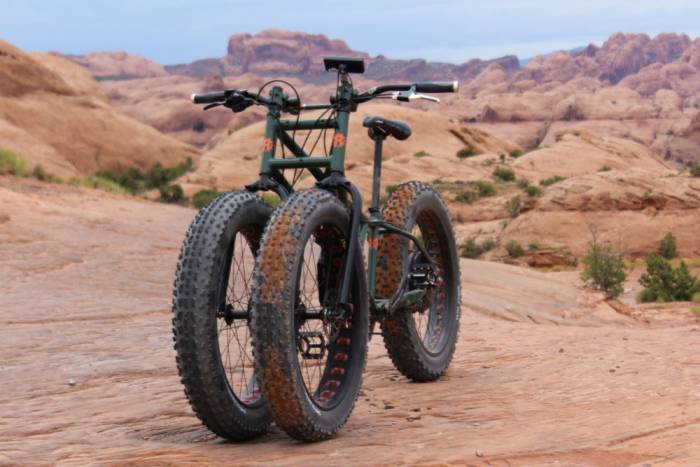 If there’s one takeaway from riding the Rungu Electric Juggernaut, it’s that the company gave it the right name. Debuted last year at the Interbike trade show, the ogre-ish super trike looks like a Humvee’s cardio-minded younger brother.

This month, at the Outdoor Retailer Summer Market, I took the floor model on a test ride.

The Utah sun beat down as I clambered over the aluminum frame. I sighted down four steel fork barrels that hold the Rungu’s dual 26-inch x 4.8-inch Surly Buds in line. A similarly beefed up rear tire sat innocently in back, ready to churn out some serious power. 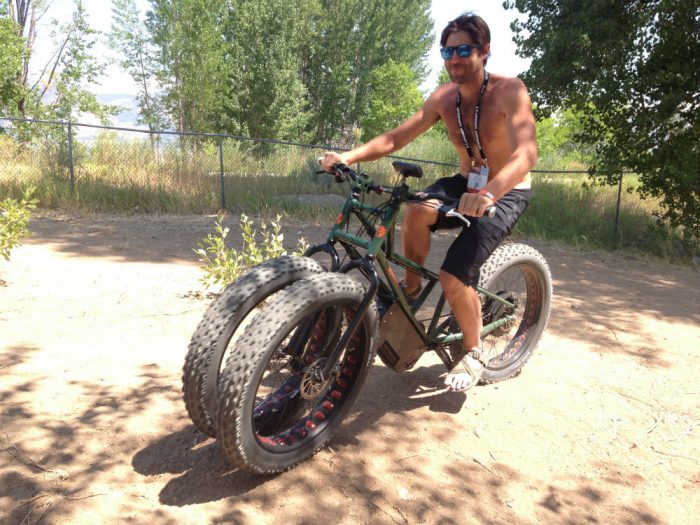 “Just start pedaling, and when you’re ready, thumb the throttle to really get going,” Rungu owner Peter Godlewski told me, obviously sensing my incomprehension. “But, you know, just take it easy in the turns.”

Godlewski is used to giving the spiel. Since the brand founded in 2010 in San Clemente, Calif., buzz around its initial non-motorized models piqued lots of interest. And lots of test rides.

The electric trike I was about to test garnered the same buzz. Plus, it was one of less than 20 made to date.

First off, the bike just stands upright – no kickstand, no leaning it against a pole. Three fat tires make this thing as stable sitting still as it is tearing over dirt.

So it was a little unusual to get on the bike (it does not feel like a trike) without immediately moving forward. But as I set my feet on the pedals and eased onto the saddle, the menacing Juggernaut sat patiently, like a slightly annoyed Clydesdale that learned to tolerate skittish riders.

The warm beach sand was soft and loose, but as I pedaled, the lone rear tire churned and caught purchase, sluggishly galumping forward. The gearing was low and the cadence quickly accelerated, but shifting to a higher gear was not why I was here.

I twisted back on the right handlebar throttle and lurched ahead – quietly. The downtube-mounted electric motor took over without so much as a peep.

And I was off.

How To Ride A Juggernaut

The hub motor is capable of 20 mph, but that’s on good terrain. Still, I was able to accelerate up to, and beyond, a comfortable speed for navigating beach traffic and 90-degree turns.

The number one mistake most riders make, and I was no exception, when riding a Rungu is to think of it as a bike. As I approached a small copse of trees and attempted to turn, I immediately felt like I was about to lose control.

I turned the two front wheels and leaned just slightly as I would on a bicycle. Mistake.

“You’ve really got to lean hard into turns to get this trike to conform to your will,” Godlewski told me days later as I rehashed my experience. “People forget that this is not a bike. They think it will tip over, but it won’t. And you have to get comfortable leaning on it hard.”

Godlewski was right, the trike didn’t tip. But it also didn’t turn until I threw my weight into the turn I wanted it to make. Then, as I got more daring, a confident jolt from the throttle pulled me through the turns. 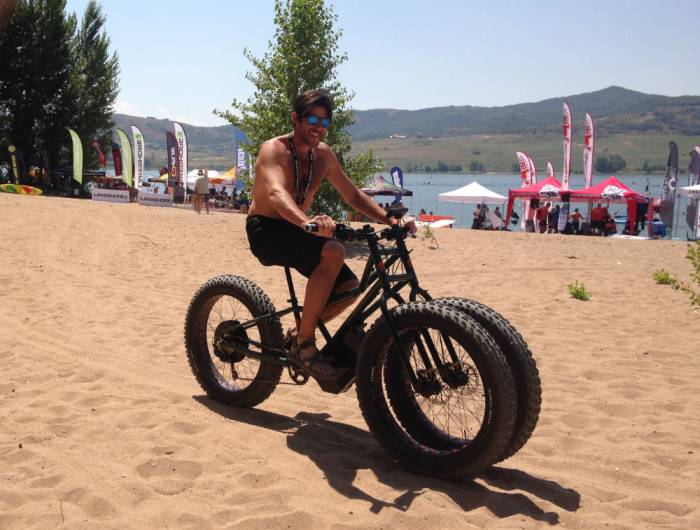 The sensation was awesome, if highly unorthodox. Two wheels in front make the trike very stable, but one wheel in back allows the rear to fishtail, a horrible feeling if it was simply a bike.

But, as Godlewski reminded me again and again, “it’s not a bike.”

Why Buy An Electric Fat Trike

It’s fun, that’s why. But it’s also expensive. The Electric Juggernaut is $4,300. For that price, you could own a high-end fat bicycle, suitable for most any terrain, and some handy extras like panniers, bar mitts, and a sweet bell.

But this trike is for work and play. This is a rig that needs to be used for hauling. Godlewski envisions towing a 12-foot SUP, or a sled loaded down with skis, a snowboard, winter camping gear, and loads of packs.

“It actually handles better when you load it down,” he told me. “It’s really designed to hold lots of weight.”

Which makes sense, considering it is branded as the “green alternative to an ATV.” Shoot, it weighs about 90 pounds without any racks or packs.

If you’re dedicated to reducing your carbon footprint, but still need to carry your toys through sand, snow, rocks, or forests, this is definitely worth considering. The motor is good for about 20 miles on a charge, and you can extend that by just pedaling it the old-fashioned way.

Just remember, it’s not a bike.

Up Next: Beginner Clipless: iSSi Pedal Doubles As Flat