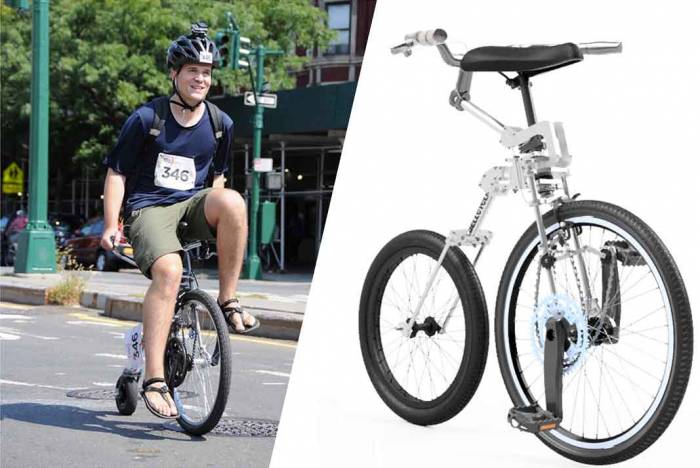 “A weird bike assembled by you, made in Harlem, NYC.” That’s the unorthodox tagline from the boutique bike-maker Alex Bell.

Is it a bicycle? A unicycle with a training wheel? Call it what you will, you’ll be sure to turn heads.

Bell invented a stub of a bike, one that puts the handlebars behind the seat and includes a wheelbase akin to a kid’s scoot-bike as an easy-to-store urban ride. It comes in a box, and you assemble it yourself from 146 bolts and parts with simple, included tools.

Bell said he invented the new kind of bicycle in his Harlem apartment. “It’s smaller, lighter, and cheaper than a regular bicycle.” He admitted it “gets lots of looks” on the street.

The Bell bike design is a front-wheel-drive model with a weird, up-twisted drivetrain and cranks. Check out that criss-crossing chain!

The target price tag is just $149. But like an IKEA chair it will come in a kit with the tools and parts necessary. From there, you build the bicycle from scratch.

There’s a video of Bell building one of the bikes. He noted of the experience, “You will learn. You will feel competent and having achieved something.”

We expect you’ll feel the same way if you successfully ride it without crashing.

But this isn’t exactly designed for utility. Bell’s goal is to spark a community of people interested in experimenting and building new kinds of cycles. He is looking for pre-production testers. Those interested can subscribe on the website and, as Bell said, “we may send you a bike to test.”

Bell is an electrical engineer and software developer. He has built a hydrogen fuel cell motorcycle, a “super-capacitor” hybrid scooter, and “countless mopeds, bikes, scooters and the like,” he said.

Now, modular urban cycles are his obsession. But why did he decide to build a bike like this, with the handlebars behind the seat?

“I live in an apartment, so I want the bike to be as compact as possible,” he said.

And having it front-wheel-drive removes the entire middle portion of the bike frame shortening it.

Bell said he experimented with many handlebar positions but decided the handlebars under the seat were best. It places the arms and hands by your side, in the same position as when you are walking.

The frame is completely custom, made of CNC aluminum, water-jet-cut parts. Plus, it’s all connected with aluminum tubes that are interchangeable, with no welding required to build.

The axle, which extends through the front wheel, connecting the pedals and drive wheel, is also custom. The wheels, chain, jockey wheels, cranksets, cassette, and pedals are standard, off-the-shelf parts.

What’s more, according to Bell this diminutive ride can be converted into a tricycle, cargo bike, tandem, and more.

Add-on parts let you transform the frame in a few minutes from a single-seater to various modular builds by bolting on extensions and additional wheels.

Bell hopes to have the kits go on sale later this year. For now, the brand is looking for testers; contact Bell if you want to be a candidate to street-test this, ah-hem, unique, two-wheel steed.

Up Next: ‘Skidsville’ Brings Waves of Bike Nostalgia