Cycling can be expensive. But it doesn’t have to be. State Bicycle Co.’s 6061 Black Label All-Road is a capable gravel bike offered at an affordable price.

If you are a cyclist, chances are you already have two bikes — one dedicated for the road and another for mountain biking. With the boom in gravel, many cyclists are pointing the rubber in another direction, down backcountry roads.

It’s arguably safer, a great way to explore your local backyard, and a fantastic workout. But it leaves many of us looking at our wallets, scratching our heads, and asking if we really need a third bike.

State’s 6061 Black Label All-Road might be the answer. Built on the brand’s racy Black Label lineup, the bike is fast and flexible. And at $1,400, it has an attractive price point.

There are faster gravel bikes with progressive geometry, more mounting points, suspension, and even dropper posts. But when you’re looking at bang for the buck, State Bicycling Co.’s 6061 Black Label All-Road ($1,400) is tough to beat.

All cables are routed internally through the aluminum frame for a clean, aesthetic look. There’s clearance for either 700c or 650b wheels secured to the bike with 12mm thru-axles, and the hoops are wrapped in Vittoria rubber.

Ride it on roads or kit it out for rugged bikepacking tours. It’s arguably the best gravel bike under $2,000, is utilitarian, and has options to upgrade.

Early this spring, GearJunkie tested some 20-plus gravel bikes in the Utah/Arizona desert. We saw all flavors of yum on two wheels. Bikes with front suspension and dropper posts to carbon component specs that pushed the lid off anyone’s box of bike envy.

Most of these bikes started at $4,000. Depending on your preferred component build, bikes could top out over $10K. Considering that’s more than my truck’s Kelly Blue Book value, it’s undeniably a lot of cash.

State, though, sits proudly at the other end of the spectrum. The brand strives to make cycling accessible and sell its bikes at a flat rate with options to upgrade. Its 6061 Black Label All-Road can be yours for a fixed price of $1,400.

State has a few options to upgrade, including its Monster carbon fork (a lighter fork with three mounting points for $180), pedals ($20), and two bottle cages ($20 for alloy and $70 for a pair of carbon cages). You can even class it up with a Brooks saddle ($130).

Most impressive, though, might be the option to buy both 700c and 650b wheels for an additional $400. Both sets come wrapped with inflated tires, rotors, and a matching cassette that makes swapping out wheels easy.

This option effectively allows you to ride pavement on Saturday, and then swap in fatter 650b wheels just in time for Sunday morning’s waffle ride.

To keep the price down, State uses in-house brand parts (stem, flared bars, cranks, and seat post). The brakes are mechanical and the frame is tried-and-true 6061 aluminum.

Although our All-Road shipped with SRAM Apex, all future builds will ship with State’s in-house drivetrain, which it says offers comparable gearing.

These are fair tradeoffs to keep the price below $1,400. Should you eventually want to upgrade parts, there’s no proprietary engineering that prohibits building out the All-Road with higher specced parts. 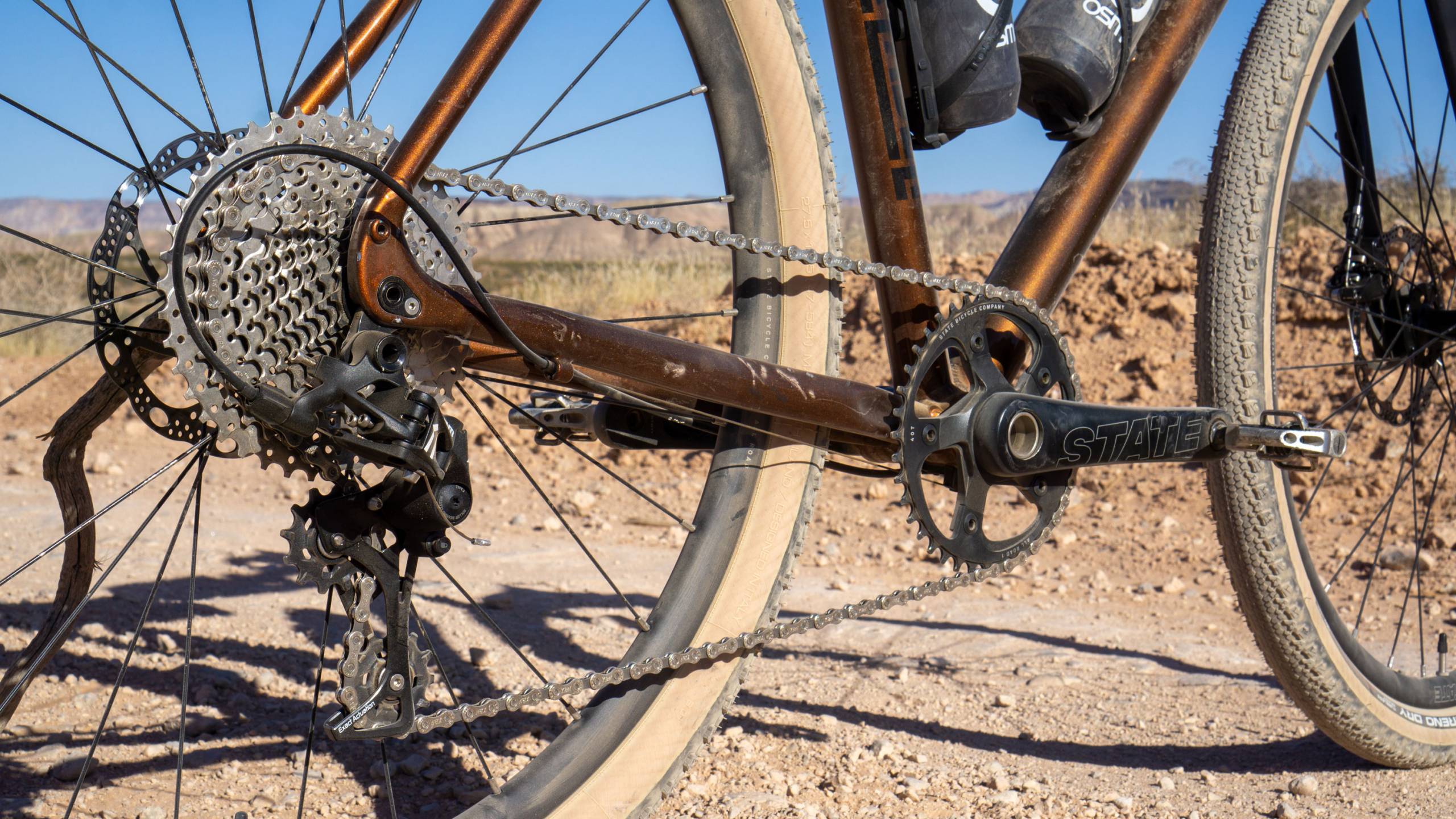 At the core of any bike is the frame’s geometry. Longer chainstays will feel more “flexy” and stable on longer rides. A shorter wheelbase adds stiffness, which translates to a frisky, nimble ride.

On the front end, a fork’s rake (or offset) measures the horizontal distance between the hub from the steering axis. It affects the bike’s “trail,” or the tire’s footprint “trailing” behind the hub’s axis. A longer trail gives the bike more stability, while a shorter trail will make the bike turn faster.

Black Label is State’s race-focused model. It was introduced as State’s aluminum line with performance and affordability in mind. Originally released as a fixed-gear bike, it was developed to be raced but is durable enough to use as a city commuter.

The All-Road 6061 descends from that pedigree, carrying over a lively geometry. The standover is high, and the bottom bracket aligns with standard road cycling numbers. Overall, the ride puts you more over the bars, as you’d expect from a performance road bike.

At 45 mm, the fork’s offset is short. This increases the bike’s trail, giving it more capability on rough trails and in slower turns. State ships a carbon fork with every All-Road, which does a reasonable job of muting road vibration as well as cutting weight.

For those who want to geek out, we’ve included the 6061 geometry chart below: 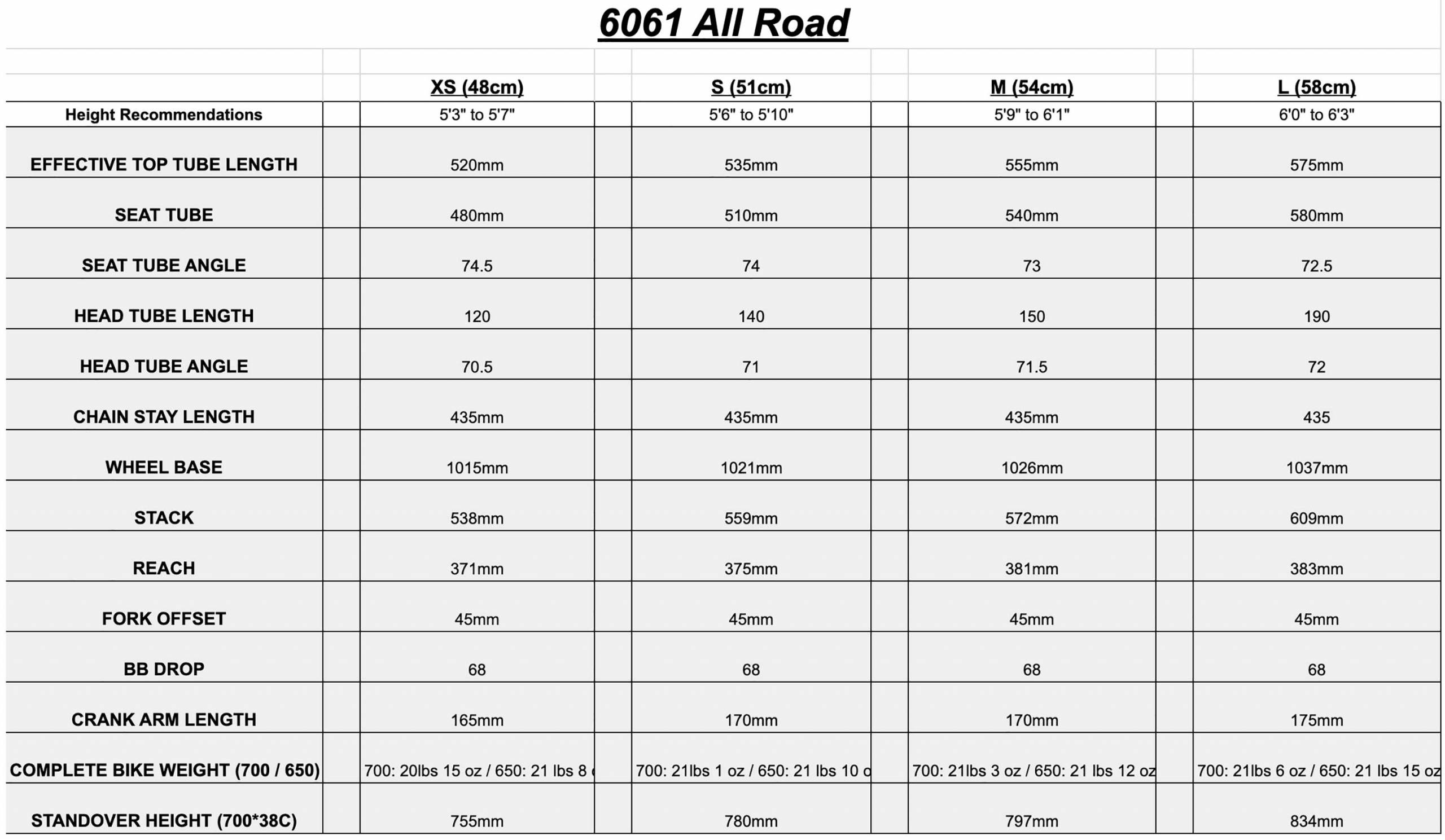 While geometry is a good indicator of how the bike might handle, it doesn’t always prove out. For example, we tested Kona’s Libre DL, which had the longest wheelbase of the bikes we tested.

By that number, you might assume that it excels on long, straight routes. It does, but it also had the most playful ride in our testing.

The All-Road’s numbers are more transparent. The geometry puts you over the bars, giving it a bias for the road. But its trail is longer, helping it feel more confident on singletrack.

It was neither outright aggressive nor upright and tour-oriented. Instead, it fell in the middle of the pack during our gravel week testing.

And that’s probably where State wants it. With 700c wheels, the bike can be raced. Throw on 650b wheels, and you can tackle singletrack trails. 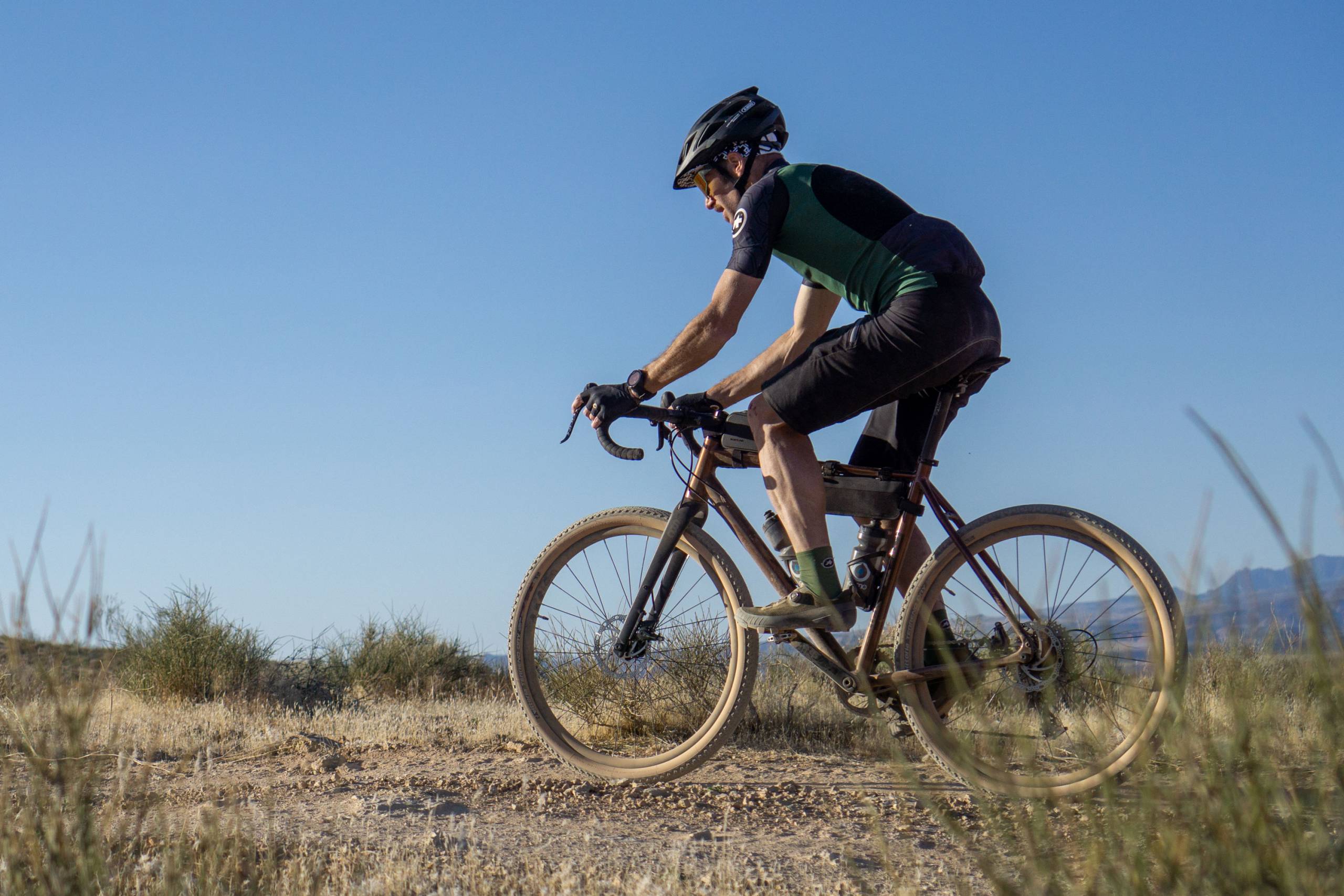 One of my favorite local rides starts on road and hops onto dusty trails before spilling out at the neighborhood patisserie. Fitted with 47mm tires, I struggled a bit to keep up with my riding partner on tarmac.

But once we hit the dirt, the bike unleashed and I was able to really hammer away. This is likely due to the shorter offset in the fork. It gives the bike a longer trail, and hence feels much more responsive carving singletrack at slower speeds regulated by the trail.

After the ride, my buddy commented how versatile the bike was and probably the only bike he’d need for riding our local trails. Now talking bikes is always better over tiny cups of coffee and croissants, but I’d have to agree. If your trails roll instead of rollick, a gravel bike is perfectly acceptable and a workable compromise.

The trickle-down effect from State’s Black Label does find its limits. The handlebars are narrow. While this helps urban riders negotiate narrow slots between traffic, it takes away from the All-Road’s handling on rough descents.

That said, the bars do flare a bit in the drops. It’s amazing what a few extra millimeters can reward in confidence.

While swapping out handlebars isn’t that uncommon, adding mounting points for water bottles is. And there just aren’t that many on the All-Road — it only has two pairs inside the main triangle.

If you are looking for more, you can upgrade to the Monster fork, which has three bosses on each blade. If you decide to go that route, it’s cheapest to do it when you buy the bike. The Monster fork is a $180 upgrade with the bike versus $290 aftermarket. 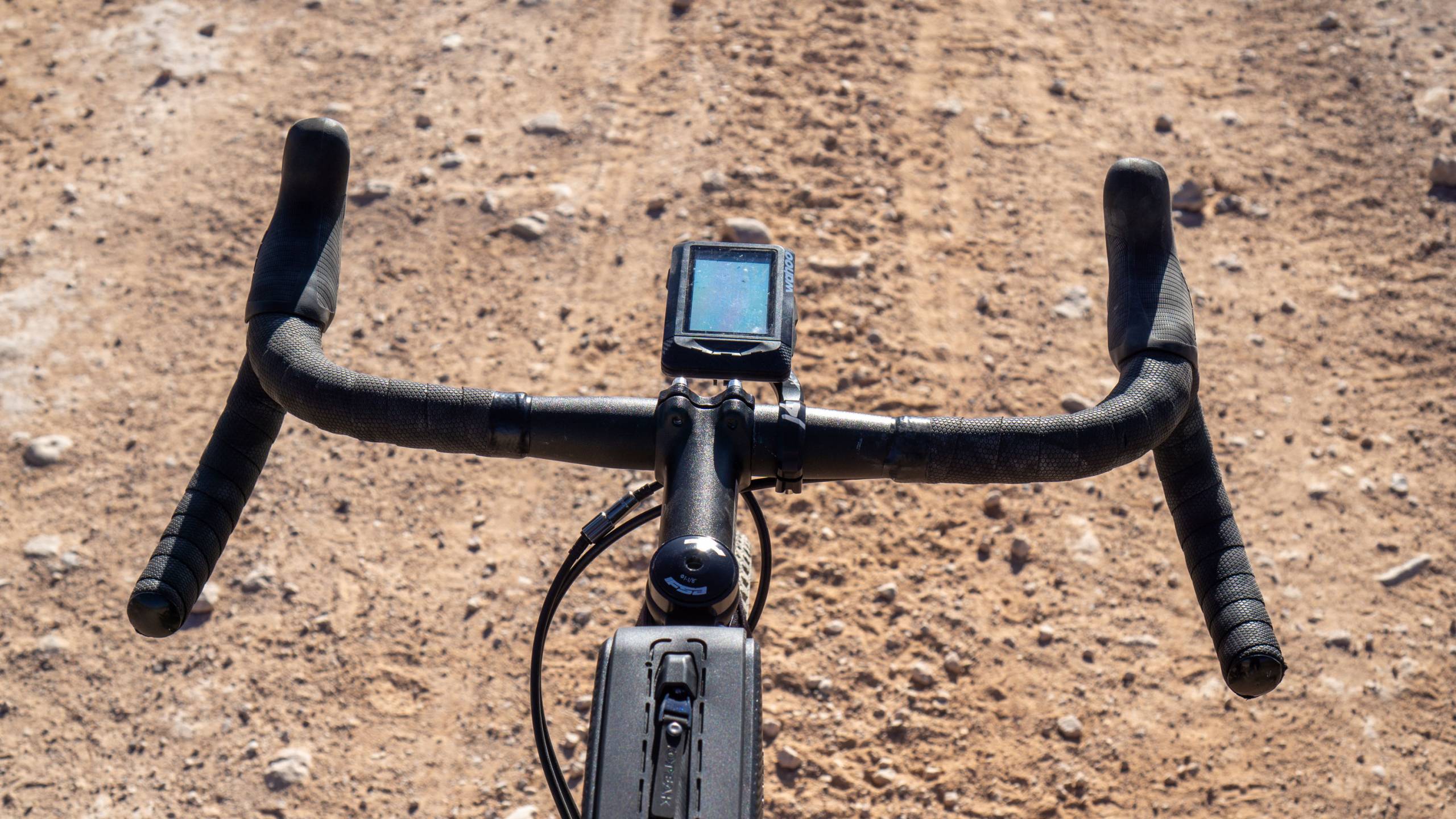 For those who have a mountain bike and road bike, the All-Road is an affordable way to dabble with gravel. But it’s maybe even better slotted as a gateway bike for mountain bikers on their way back to the road.

The manners will be familiar to the trail. And with simple and affordable pricing, State makes it easy to use it as both.

If you can only get one wheelset, given its trail maneuverability, our recommendation would be to set up 650b with 47mm tires.

We reviewed the best hitch bike racks for 2022 with options for every budget. Top picks include Thule, RockyMounts, and more. Read more…

Up Next: How to Teach a Kid to Ride a Bike