With the Helium Platform, Thule takes on the 1Up with a lightweight, one- or two-bike hitch rack that won’t touch your frame and is both lockable and easy to use.

If you’ve ever tried to put mountain bikes on nearly any hitch rack, you know it’s a dance of dropper post adjustments to keep seats clear of handlebars, and wiggling bikes back and forth so handlebars don’t knock brakes on a neighboring bike.

On Thule’s aluminum Helium Platform, however, it’s super easy to mount any bike so it doesn’t hit the one next to it. And it makes it so you don’t have to adjust trays, droppers, or anything else. Best of all, mounting a bike on this rack takes less time and faffing than getting a bike on or off pretty much any other rack. 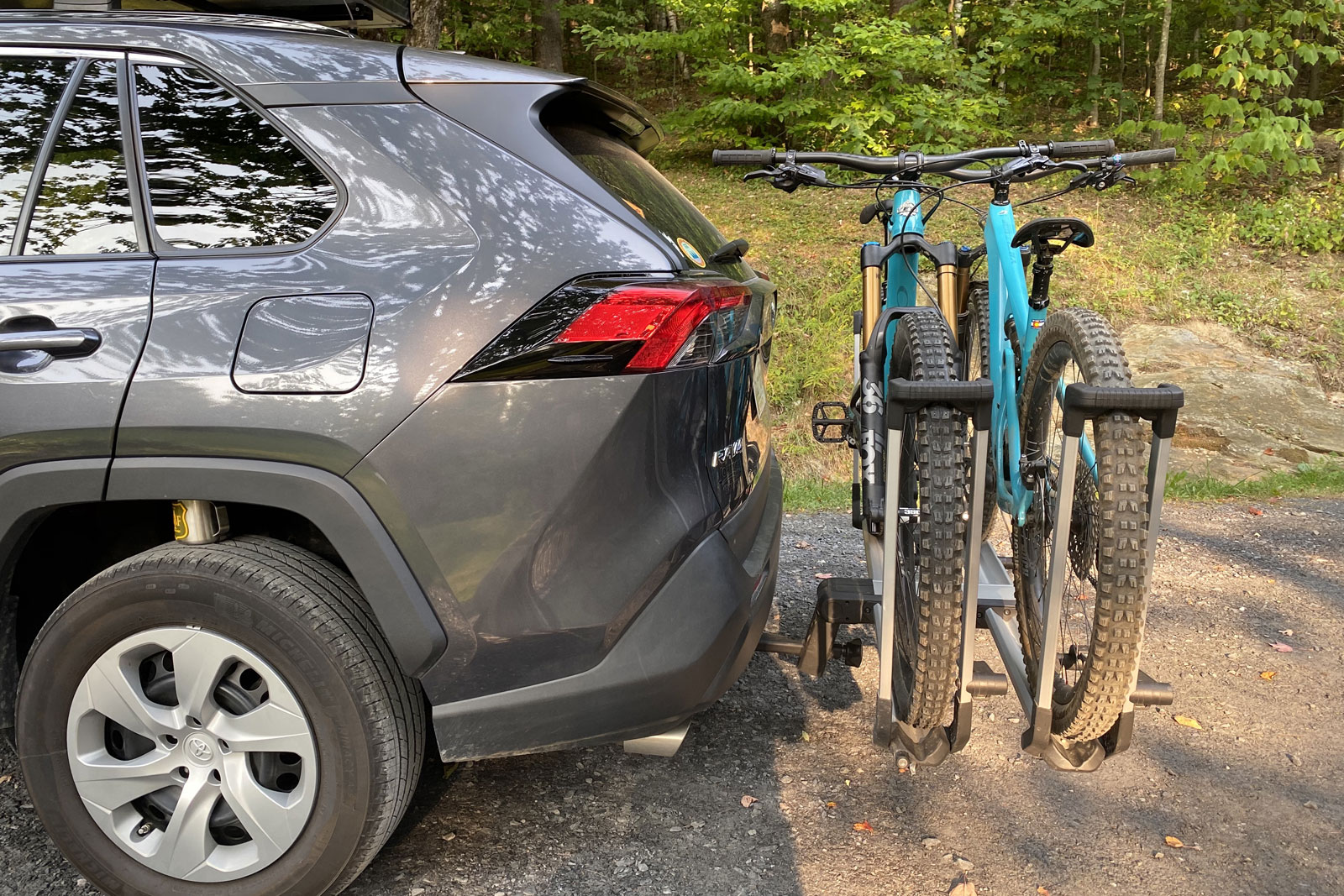 We put the $700 Thule Helium Platform hitch rack to the test to see how it stacks up to an industry standard — the 1Up — what it does well, and what could be better.

Bikes are expensive, and these days more and more of them are carbon. That’s why a rack that holds bikes securely without touching the frame is the only rack I’ll use.

To the Helium’s credit, it proved the fastest platform rack to load that I’ve ever tested. To load my bike, I opened the symmetrical ratcheting wheel loops. The loops opened when I squeezed the handle on each, then closed to clamp around my tire when I pushed them closed.

When I loaded two bikes, I could shift one slightly forward or backward so they nested without rubbing, and I was able to do it on the fly — no tray adjustments, rotating brake levers, or fiddling with seats or posts required.

When I use a standard tray rack, I inevitably get the front wheel locked down, then realize I didn’t release the back strap, and I have to leave the bike kind of hanging while I undo the strap and reinstall the bike. With the Helium, all I had to do was push each of the wheel-holders toward the center. They move with the squeeze of the handle at the end of the holder.

Once the wheel-holders are pressed inward to secure the bike, the rack is ready to roll. And if you’re stopping for an errand, an integrated theft-deterring cable slides out from each tray to lock each bike. It’s not impenetrable, but it offers definite peace of mind for gas or rest stops. 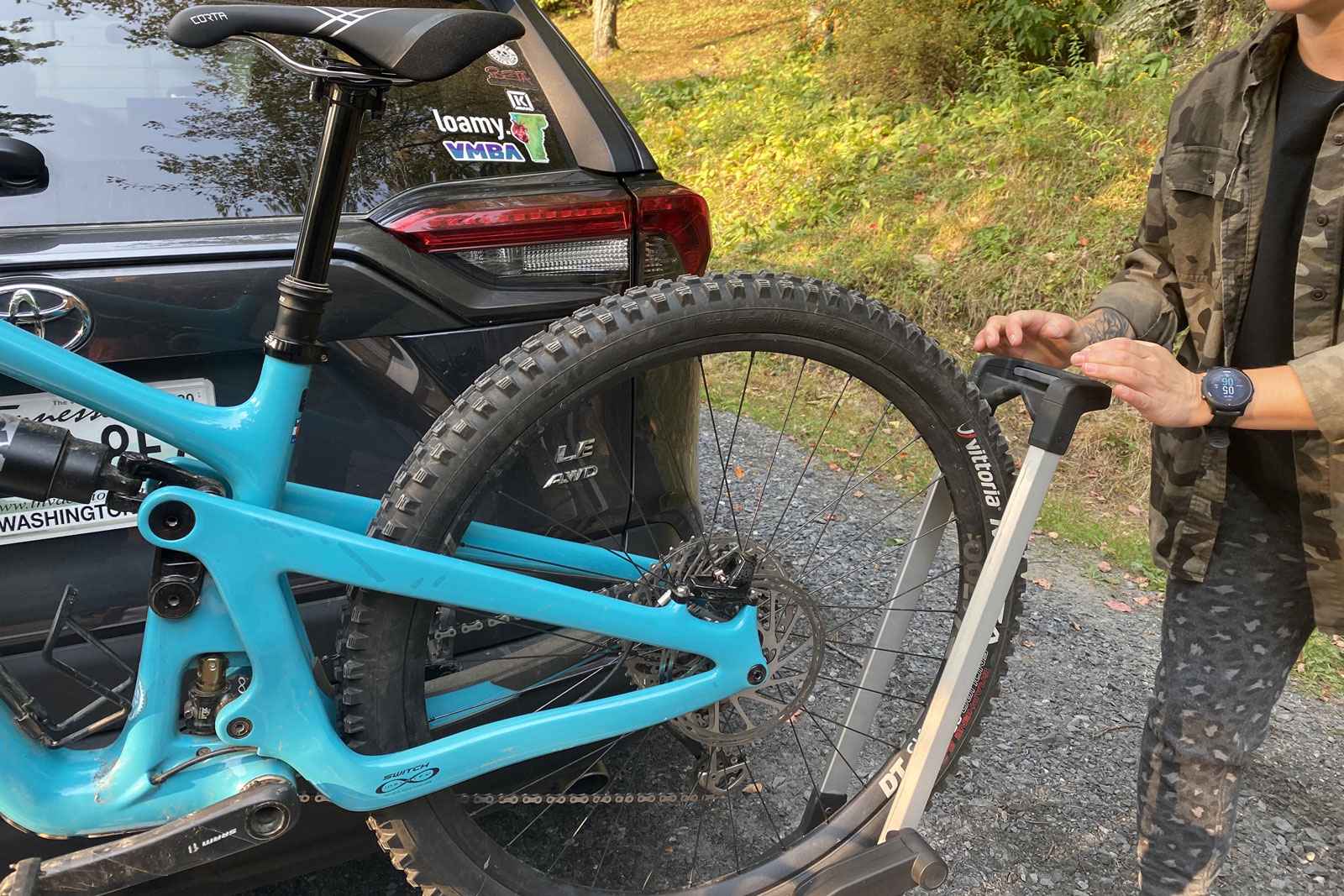 Getting It on My Car

Installing the rack on the car proved as easy as installing the bikes on the rack. At just over 43 pounds, the Helium is significantly lighter than many other racks. Yes, that sounds heavy, but it’s a manageable heavy. With the rack folded, I slid it into my 2-inch hitch receiver.

A small block in the corner of the square stock that slides into the hitch receiver needs to be pushed into alignment first. That’s the piece that expands when you twist the knob at the base of the rack to lock it into the hitch.

When I slid the rack into the receiver, a hook on the right side clipped into a receiver pinhole to position the rack in place. This prevented it from sliding too far into the receiver. With a twist of the knob at the base of the rack, the rack secured to the hitch mount, then locked to the car with the knob, which has a lock core.

Now with the rack installed, a squeeze of the handle in the middle of the rack either lowered it to level for loading or folded it down beyond level. With it folded, I was able to get into my hatchback trunk even with bikes loaded on the rack. The lever for raising and lowering the rack is easy to access, and I only needed one hand to operate it. 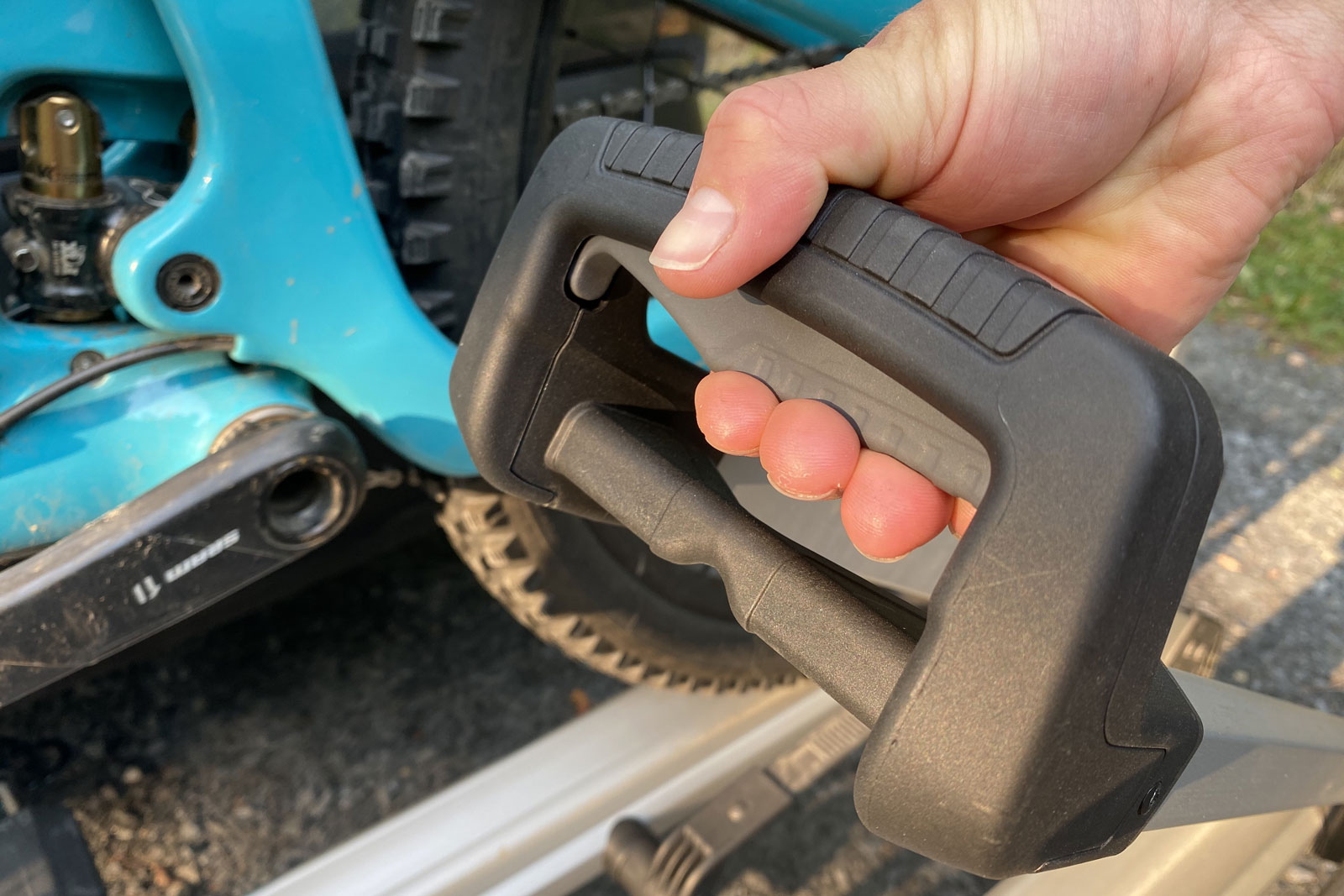 Check If It Works for Your Vehicle

The only issue that I ran into with the Helium Platform was when I tried to mount it on a Toyota Sienna minivan — it hit the bumper. I needed a hitch extender for that vehicle. On a 2019 Toyota RAV4, the fit was tight, with a couple of millimeters between the bumper and the rack.

The Helium needs 4 inches more bumper clearance than Thule’s T2 Pro. A guide on Thule’s website will help you determine if it will fit your vehicle without an extender.

Thule Helium Platform: Who Is It For?

The Helium Platform is Thule’s take on the style of rack that 1Up made famous. Both racks are aluminum. The 1Up is a few pounds heavier, but it’s expandable and the Thule is not. Thule told me that what really sets the Helium Platform apart from the 1Up is that the Helium Platform meets the Swedish company’s extremely arduous testing standards. In fact, the rack release was delayed a year while Thule re-engineered it for more strength and less weight.

Another important note: The Helium Platform won’t work for riders on wheels smaller than 26 inches. And if you need more than two mounts, look elsewhere. This rack can’t currently be expanded. Also, if you own a heavy e-bike, you’ll need a different rack.

But for most riders, the Helium Platform will make for an awesome choice. I never worried about my bikes, even on the roughest roads. And I loved how easy it was to load and unload bikes. While driving, my bikes never bumped each other, and I didn’t need to spend time wiggling them around to get them nested.

Plus, the rack has a sleek, more aesthetic look that most other racks. Not only did it look good, but it didn’t weigh down the rear end of my car, which made it more pleasant to drive. 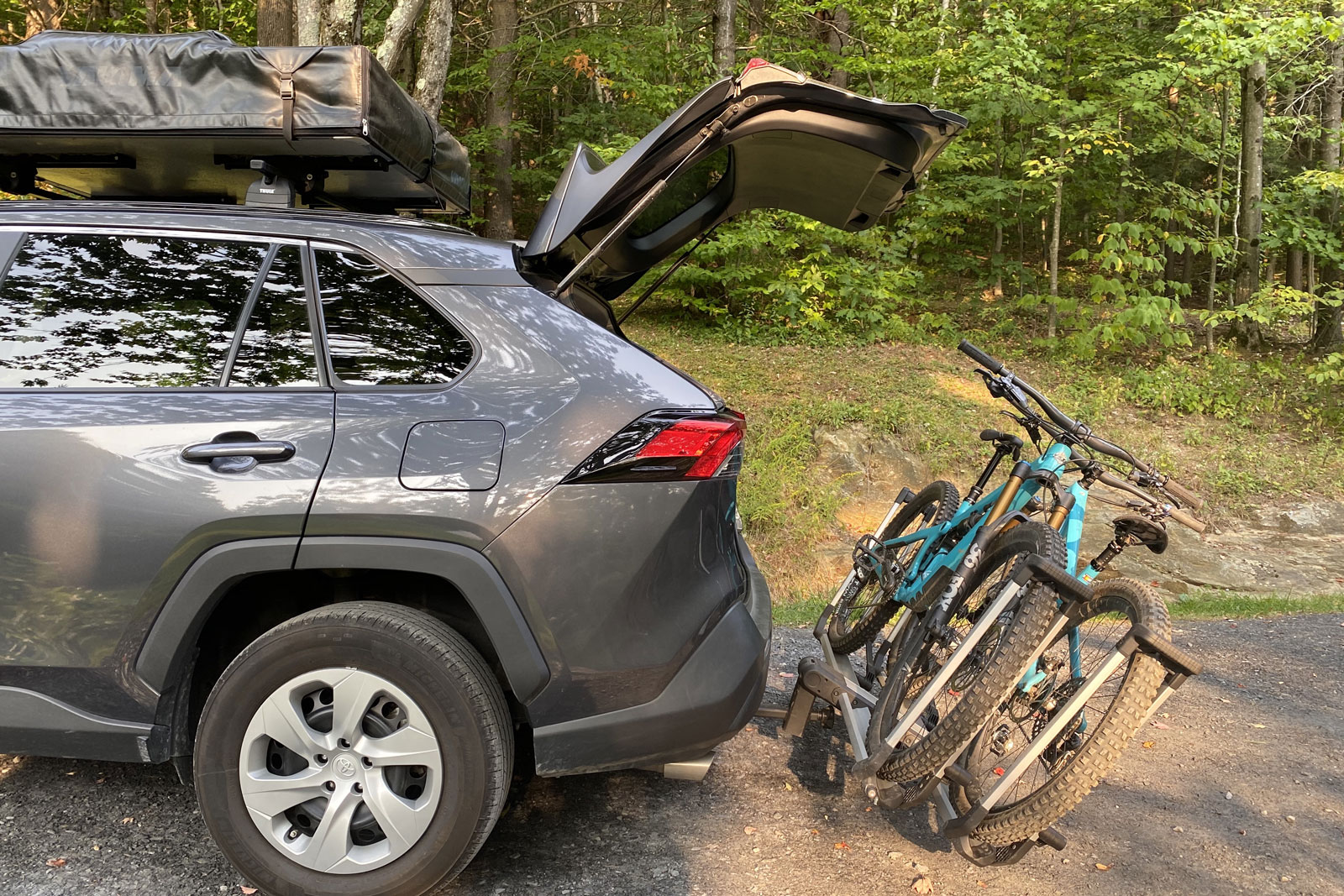